Take a Gander at This

Debbie and I went for an early morning run around the neighborhood last Sunday and were surprised to see these guys at the pond area. 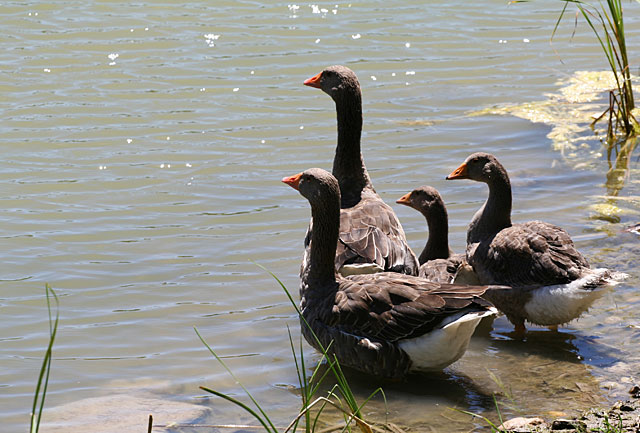 According to my extensive (one or two clicks) research, these are Western Greylag (or Graylag, if you prefer the Americanized spelling convention) geese, with the pleasingly repetitive scientific name anser anser anser (just trying typing that without inputting "answer" instead). They apparently have a wide range worldwide, but I have no idea whether these are domesticated escapees, or slightly confused travelers, seeking temporary haven while trying to recalibrate their GPS.

I expected that they would be gone very quickly, but they were still hanging around yesterday evening. In fact, they had picked up an accomplice in the form of an apparently species-confused young duck. While the geese swam slowly across the pond in single file, the duck paralleled their course a few feet away, serving as a wing man. The other ducks  were huddled together across the pond. We surmised that they'd either ostracized the youngster for bad behavior (you know how they can be), or had sent him to spy on the intruders. Or, perhaps, he simply had grand aspirations that he felt couldn't be fulfilled by normal duckhood.

On a related note, that run was chock-full of good bird sighting, as a sandhill crane also graced the northern pond. Unfortunately, he didn't stay around for long, and I wasn't able to get a photo.

Am I wrong? Or, are these guys mooning you, Eric?

It's a little known fact-ish assertion that when Paul Simon originally sat down to write the lyrics to "At the Zoo," he intended to included the phrase Geese are contemptuous of visitors with their cameras, but the orangutan lobby was powerful and another phrase ended up in the final version.

Now I hear the Garmin gps woman,"recalculating" over and over in my head almost makes me want to get out the map myself and see where these cute little guys belong.

Local Newspaper Listens, Improves was the previous entry in this blog.

Nature Walk is the next entry in this blog.