LPG Fracs: Technology for the times?

Update (1/21/12): Ran across this blog post about LPG fracing. I don't have a great ear for subtlety, but the writer seems to be entering the discussion with a distinct bias, and some of the claims are simply wrong (or misleading - an outcry over putting hydrocarbons into a rock strata where hydrocarbons already exist naturally is a bit specious). The comments are more enlightening than the actual article but it does highlight the indisputable fact that fracing is an emotional topic for many people on both sides of the issue.
The debate about the merits and hazards of hydraulic fracturing of oil and gas wells will likely never subside, as its opponents argue that the process causes everything from fiery faucets to endless earthquakes, and its proponents claim you can drink frac fluid without suffering ill effects other than an unnatural affinity for the Houston Texans. 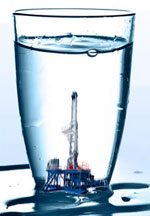 But at least one argument against the process is gaining validity, and that's the undeniable fact that fracing takes a heckuva lot of water, and water is a precious commodity that's growing painfully scarce in many parts of the country. The typical frac job uses tens of thousands of gallons of fresh water (and can require more than a million gallons), and much of that is rendered non potable by the process.
Perhaps it's time for oil and gas companies to take a serious look at using liquified petroleum gas (LPG) as a replacement for water. LPG is generally a mixture of propane and butane. I ran across this article on the Unconventional Oil & Gas Center website that describes the process and a Canadian company, GasFrac Energy Services, Inc, that specializes in LPG frac technology.
Once you get past the psychological impact of thinking about pumping a highly flammable mixture under unimaginable pressures into the ground (GasFrac contends that the process is actually quite safe, although they probably make that claim from deep inside a bunker in an undisclosed location), the benefits are obvious. You're using a hydrocarbon to entice other hydrocarbons to flee their rocky bonds while eliminating not only the need for copious amounts of water, but also for CO2 which is commonly used to "energize" the frac fluid. The frac fluid becomes a part of your revenue stream as it's produced with the reservoir oil and gas, rather than being an expensive disposal problem.
I did some quick asking around the office yesterday and no one was aware of any LPG fracs in the Permian Basin, although someone thought that Pioneer Resources may have tested the process locally. If anyone has some insights in that regard, feel free to share them.
Some companies will be better positioned than others to take advantage of this technology. For example, those with gas plants in the area of the drilling operations could, in theory, produce the LPG used for fracing, and then reprocess the produced liquids stream.
As recently as a couple of years ago, the proposition of pumping LPG into the ground as frac fluid was laughable, from a cost perspective. That perspective has to be changing as natural gas prices continue to tank, and the reality of dwindling water supplies sets in. Water may still be cheaper, but it's also more valuable.
As I reported in these pages a month or so ago, owners of oil and gas wells permitted after February 1, 2012 must disclose the ingredients of frac fluid, as well as the volume of water used in the frac operation. Those disclosures will be made public on the FracFocus website.
Posted on January 20, 2012 10:08 AM | 7 Comments

Thank you for the article on LPG fracking, In regards to companies testing LPG fracking in the Permian Basin, at least two companies have done so: Approach Resources and Abraxas Petroleum.

Nawar, thanks for the feedback! I did a search on FracFocus.org to see if either of these might already be in the database, but neither company is apparently a part of the initial test group.

Can you share anything about the frac jobs...how they turned out, if there were any unique problems, etc.?

Eric, both companies have reported positive early results; however we should know more once they report their Q4 quarterly earnings late February, early March. As for the locations, Abraxas did their frac in the Canyon Sands area; while Approach did theirs in the Wolfcamp formation. If you are interested in learning a bit more about Propane fracking, here are the presentation slides of the latest presentation given by Gasfrac CTO (Robert Lestz), Gasfrac is the only company that does propane fracking:

While here, you have a couple of articles I published on Gasfrac on seekingalpha:

Nawar, thanks for the links. I read all the articles and found them very interesting (as were the comments on the second article you wrote). I wish there had been some insight about the Wolfcamp frac; as you know, that's a hot play out here in the Permian Basin right now. Well, everything is hot in the Permian Basin, but Wolfcamp in particular.

My pleasure Eric, glad you found the information of interest, in regards to Approach this is what they have reported so far:

Hard to say whether they're just being coy on the CC or if they truly don't have a good feel for the results.

I've done some more informal "asking around the office" about this technology and the biggest impediment (besides the upfront increased cost) is the concern about safety. Almost everyone in the oil patch has a bonus program that's tied in large part to safety performance, and very few people are willing to take a risk on something that even smacks of being dangerous. I truly don't think this will change until GasFrac gets a few thousand more fracs under their belt, without blowing up anything or anyone.

I appreciate your prospective Eric; interestingly enough what you mentioned is exactly what the company management has told me; their biggest impediment is safety concerns; from what I understand their new management (hired 2 months ago) is working actively to rectify that safety perception issue, working on customer education, getting safety videos..etc ; it is worth noting that in addition to paying the same insurance premiums as a hydro fracker; their technology was validated (after a rigorous safety vetting) at three super majors: Chevron, Shell and Marathon; in addition to their biggest customer Husky Energy.

My guess with time as more customers try the technology, and as you say, as they have more issue free fracks under their belt, the safety perception issue should dissipate.

Eat your heart out, MacGyver was the previous entry in this blog.

Tempestuous Tango is the next entry in this blog.