A Moving Experience at Church

Have you ever visited the Grand Canal Shoppes at the Venetian Hotel in Las Vegas? It's a spectacular indoor setting mimicking the watery "streets" of Venice, 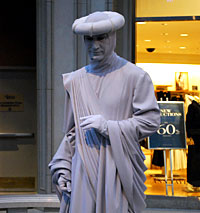 complete with singing gondoliers. I've never been to Italy, but I'm sure it's exactly like this except for the Harley Davidson store and Nathan's Famous Hot Dogs, but with the same pickpocket-to-tourist ratio.
Anyway, some of the featured attractions are the living statues, humans decorated in medieval clothing and monochrome paint designed to make them resemble carved marble. The illusion is made complete by their ability to remain completely still, as still as...well, stone. These actors have an astounding gift, although I can't shake the feeling that they're enhanced by certain pharmaceutical applications.
That I do not possess this particular gift was made abundantly clear this morning in church where my fidgeting was on display for at least a thousand people.
We're meeting in a downtown convention center while our church is being repaired following a recent fire, and one of the [many] challenges is continuing to video-record the Sunday morning services. All media equipment is transported and set up the night before, including our normal three video cameras which have been mounted on temporary stands that resemble nothing more than giant upended peach crates. And, unfortunately, they're about as stable as that.
While they're not in any danger of collapsing, they have the unfortunate ability to pick up and magnify the slightest motion and transmit it through the camera lens, and my camera this morning was the one that was used to project the sermon onto the two big screens at the front of the auditorium. I suspect many of you attend churches with a similar setup.
This was my first time to operate a camera under these conditions, and it will be my last time, and not just because we're moving next Sunday to a different location with - I hope - better camera stands. I'm not the most passive of observers under the best of conditions, and standing for more than an hour on a platform that seemed to move with every breath wasn't the best showcase of my mad camera operating skillz, even without the added mental stress of knowing that any stray movement was being projected for the audience. I never realized it was medically possible for so many body parts to start itching at the same time.
I didn't notice anyone in the congregation becoming motion sick because of the jittery picture on the screens, but I'm pretty sure I overheard one small child ask her mother why we had a meth head working a camera.
The only saving grace to this situation is that I'm pretty sure we're not broadcasting any of these services, so the visual outrage will be confined to those in attendance (and their Facebook walls, of course). But if by some quirk of fate you happen to be present during an airing on TV of this morning's service, do not adjust your set. The problem lies elsewhere.
Posted on December 30, 2012 3:27 PM | 2 Comments

Since I was sitting on stage with the orchestra, and we can't see the screens, I am happy to tell you that your fidgeting did NOT ruin the worship experience for me. So, there's one encouraging voice.

Yes, I'm greatly encouraged to know that only those people who saw my work could detect my incompetence. ;-)

A Fractured Fairy Tale was the previous entry in this blog.

Bible Reading: A New Year, A New Approach is the next entry in this blog.