If you've spent much time around doves you know that they run a close second to sheep for being the dumbest animals on God's green earth. I make this assessment based primarily on the ridiculous places they choose to build their nests. For all I know, they're geniuses when it comes to differential calculus and quantum physics, but architecture and civil engineering is not their forte.
Case in point. This afternoon, Debbie mentioned that she'd discovered that a dove had built a nest on top of our cement block wall, under the eave of the house, and appeared to be sitting on eggs. Of course, I had to grab my camera and check it out. I came around the corner by our garage and, sure enough... 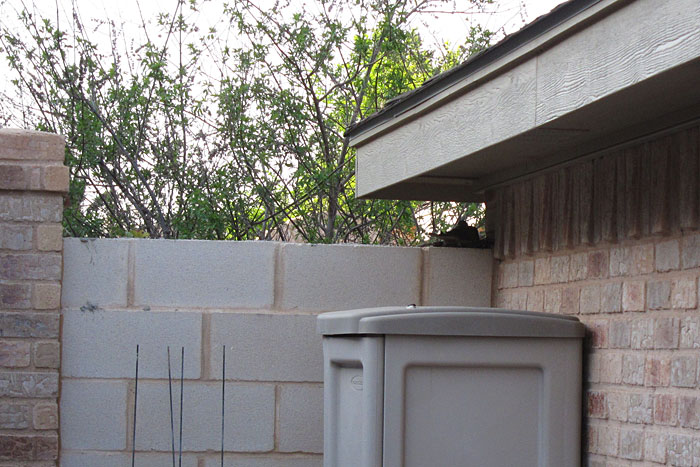 I went into stealth mode (meaning that I did my best not to fall on my face and destroy my camera) and drew closer. 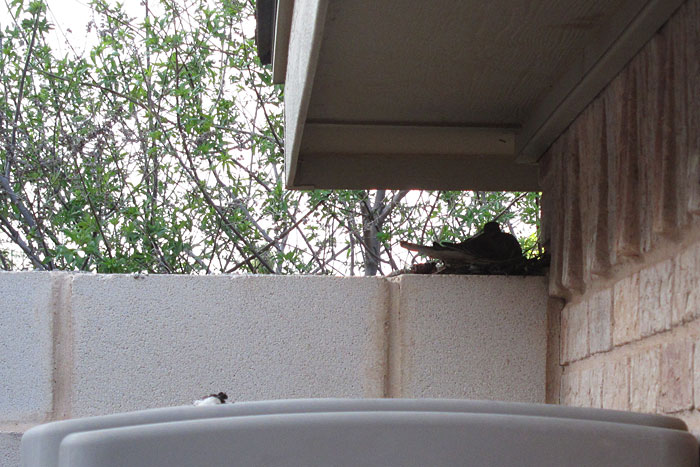 There was a stiff north wind and I was downwind so I was able to get pretty close before the dove noticed me. She looked vaguely apprehensive in a low-IQ sort of way, but didn't budge from the nest. 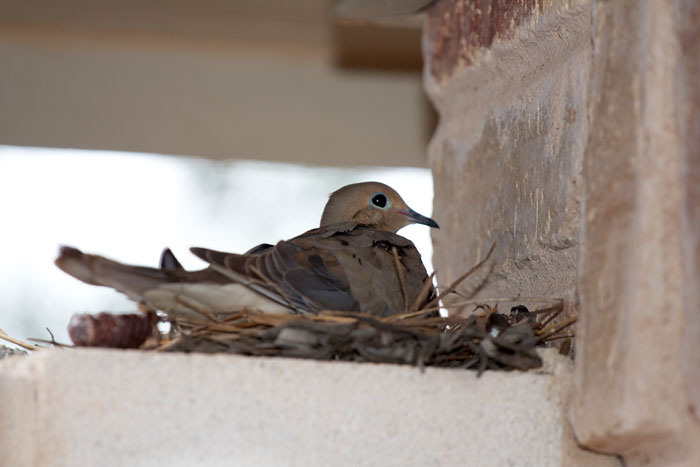 As you can see, there's not much to a dove's nest, just enough twigs and grass to form a berm to keep the eggs from rolling away. 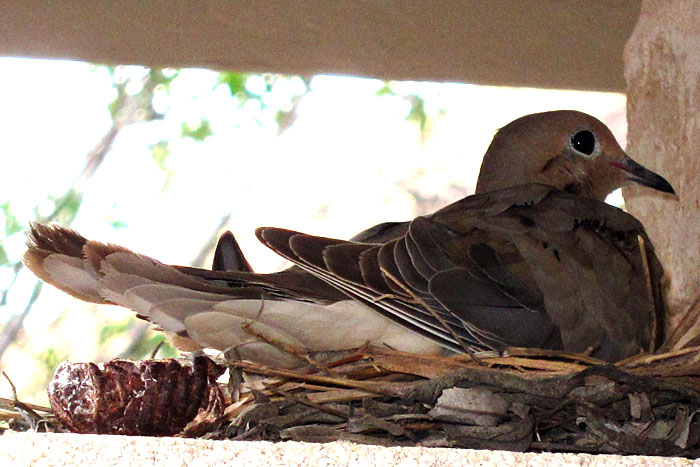 I suppose this will work for her, but it seems awfully exposed, especially if our foxes and the occasional neighborhood cat come around. And, while it's sort of off-putting to draw attention to it, that scat behind the nest came from some kind of predator, so I think this nest is existing on borrowed time. We'll see.
[Update: A Gazette reader has noted that the dove was actually responsible for the rather large scat, the result of long periods of nesting. My response is mainly along the lines of "ouch."]
Funny story about these photos. I was completely focused on the camera (see what I did there?) and heard someone come up behind me. I didn't turn around because I figured it was Debbie coming to check on the nest, so I just kept shooting. When I finally finished, I turned around and was quite surprised to see my next door neighbor quietly and patiently waiting for me to finish, and holding a rather large plant she was moving from her back yard to the front. But she was also fascinated and said that she'd probably walked by the nest a dozen times this afternoon without noticing it. So, perhaps it's not such a ill-chosen location after all. But I don't think it's humans the dove needs to worry about.
Posted on April 19, 2015 9:57 PM | No Comments

Walmart Closings: Even MORE Theories! was the previous entry in this blog.

Kicking into Kickstarter? Be prepared to kick yourself. is the next entry in this blog.