On Saturday night, December 26, the immense winter storm known as Goliath began to edge into the Permian Basin. MLB and I first encountered it ten miles east of Monahans at about 8:00 p.m. while driving back to Midland on I-20 from Fort Stockton, where we'd cut our Christmas visit with family short in an attempt to beat the weather. We didn't quite make it.
From the moment we left Fort Stockton we were treated to a lightning show in the north...the direction we were headed. We drove in and out of a slight drizzle, and while water was running in the streets in Monahans, it was no longer raining and we began to think we'd missed the the worst of the line of thunderstorms that had apparently preceded us. We were wrong.
As we passed the turnoff to the Monahans Sandhills State Park, traffic started to slow and we could see a line of flashing tail lights stretching to the horizon. Shortly thereafter, patches of ice began to appear on the highway. The ambient temperature was still 38º so the presence of frozen water was puzzling.
The further we drove, the worse the conditions, until we were traveling at speeds of 40 mph and less. Sleet was falling steadily; the good news was that the temperatures continued to remain above freezing. Still, we saw plenty of disabled cars on the shoulder, and one pickup on its side in the median. By the time we got to Penwell, we'd seen at least a dozen emergency vehicles with flashing lights heading west toward Monahans. Something serious had apparently happened behind us (we never learned what).
By the time we got to the Caprock, the sleet had turned to rain, and traffic began to move a little better. However, occasional patches of ice kept us from becoming complacent and we kept our speed between 50 and 55 (making the 18-wheelers who continued to pass us doing 70 seem all the more insane). Then, about five miles from Midland, the rain gave way again to sleet, the hardest we've ever encountered. I began to wonder at what point sleet was more properly described as hail. The sound of the sleet hitting our truck was almost deafening.
Despite the drama, we made it home safely, and we really didn't experience any close calls...just long periods of intense nervousness. It was a relief to pull into the garage around 9:00 p.m.
A layer of ice coated everything when we awoke on Sunday morning. Almost every church in town had already canceled its services, so we prepared to spend the day indoors, as the forecast called for increasingly bad weather. Sure enough, the snow began falling at mid-morning, and continued throughout the day. We eventually accumulated between six and seven inches - not a record, but among the top ten heaviest snowfalls in Midland. It was a good day to stay inside with the gas log burning and cheesy movies on TV.
However, I couldn't resist venturing out with my camera later in the afternoon to document the rare weather phenomenon. 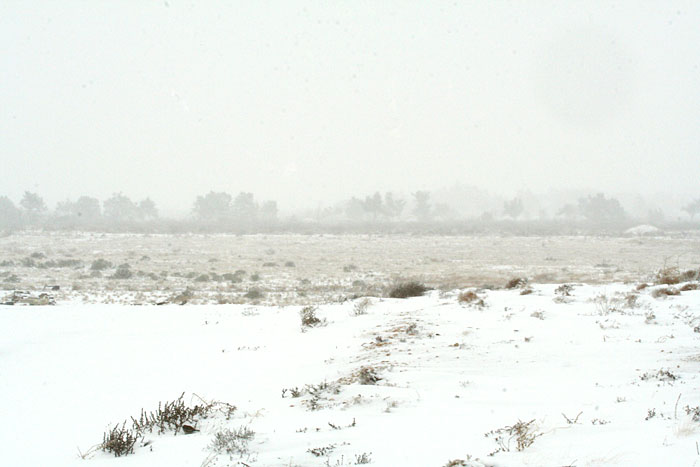 Near white out conditions - looking toward Midland Country Club 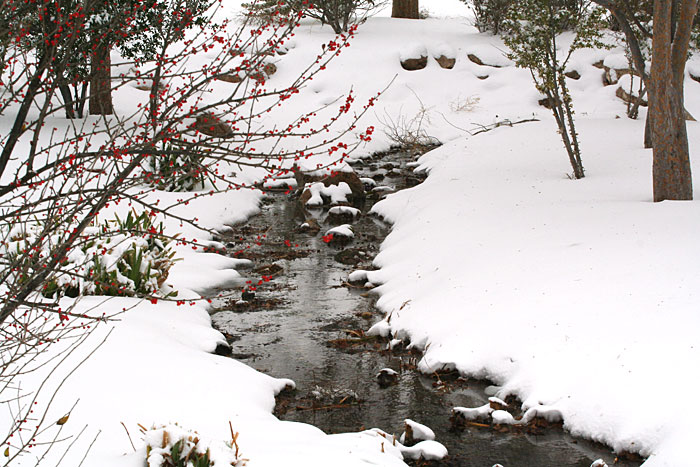 We have our own snow-fed "mountain stream." 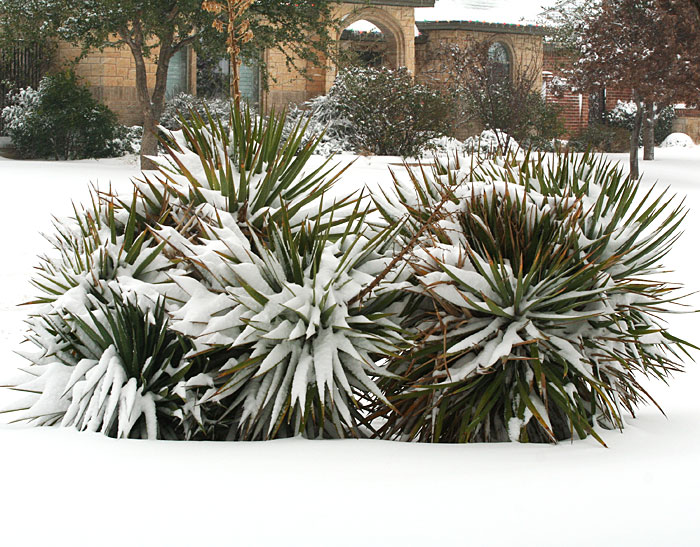 The yuccas were not amused. 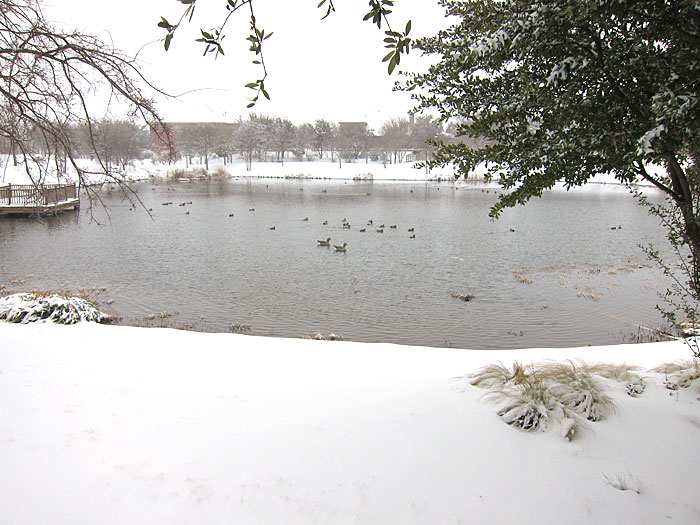 The south pond is always beautiful when surrounded by snow. 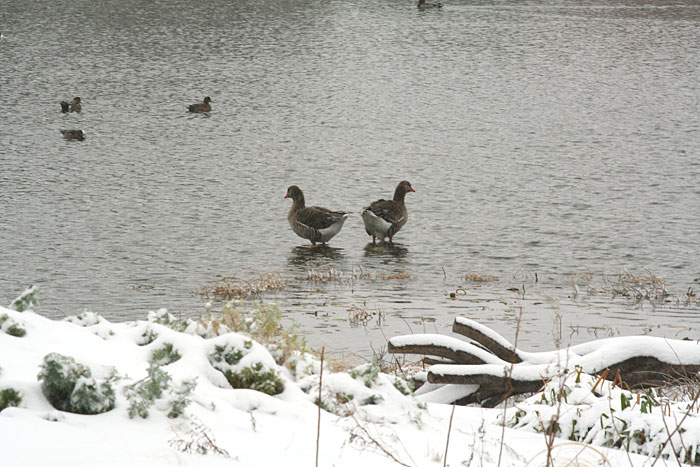 Our resident geese like to stand on their pedestals, towering over the ducks. 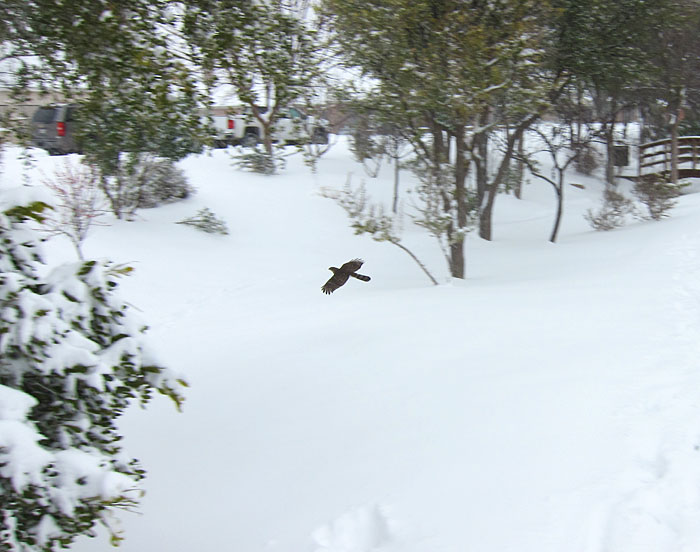 While photographing the pond, a movement caught my eye and I was amazed to find this image on my camera. 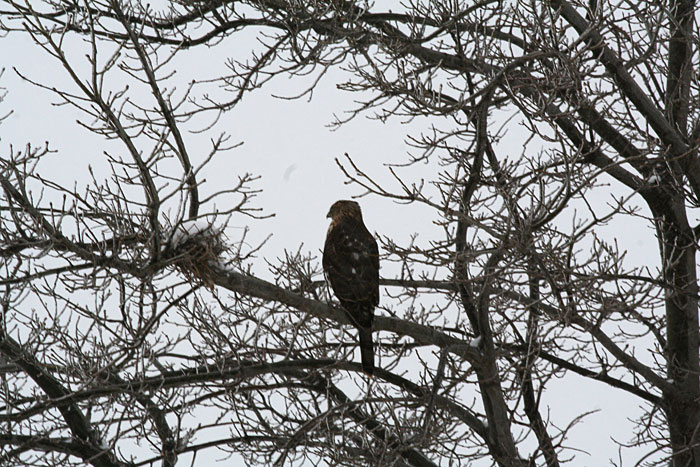 It was a red-tailed hawk, seen resting here in a tree. 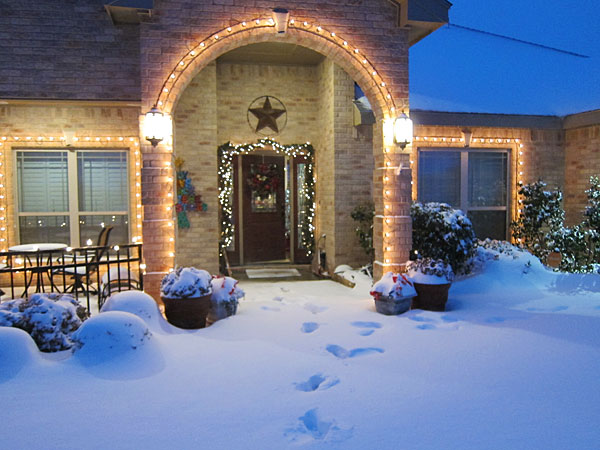 We didn't have a White Christmas, but this was the next best thing. 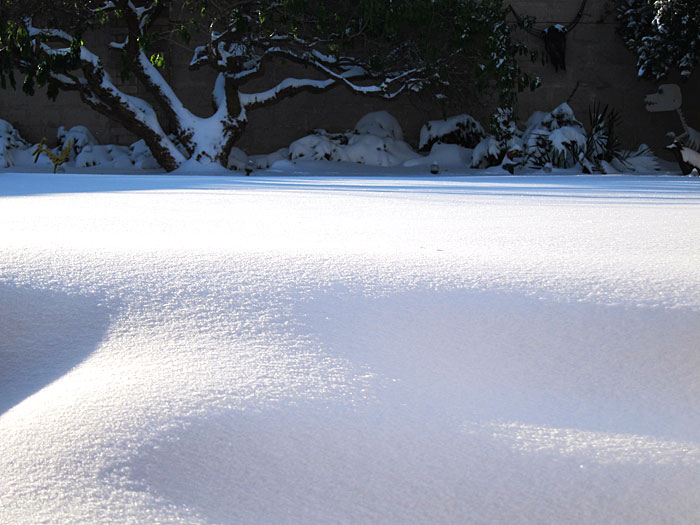 The sun came out the next morning, and the snow was beautiful. 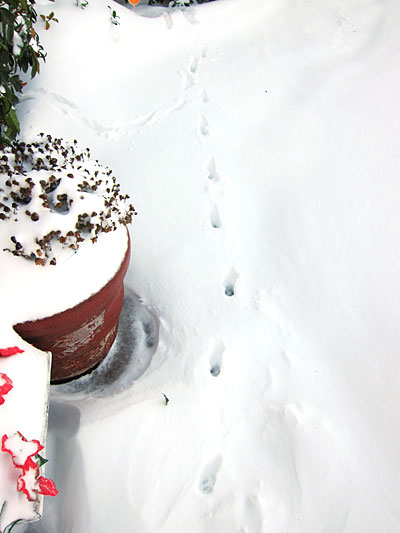 I suspect the bunnies didn't think the snow was so great.
Of course, heavy snowfall won't keep people from having fun outdoors, and this was the opportunity of a lifetime for some young kids who may have never seen this kind of weather before. I looked out the front door in time to see this heading down our street toward the end of the cul-de-sac, and grabbed my video camera for the return trip.

God With Us was the previous entry in this blog.

Ch-ch-ch-changes is the next entry in this blog.