A week ago today, Midland experienced its third heaviest daily snowfall in recorded history. Officially, we received more than seven inches of snow, making for some very pretty scenery.
I had a brainstorm while gazing out at the winter wonderland our back yard had become. Given that I'm a long-time West Texas resident and thus exceedingly wise in the way things work, I knew that the snow would disappear quickly. This would be a perfect opportunity to try my hand at creating one of those time-lapse videos that I find so intriguing.
I had tried time-lapse a couple of years ago and was fairly pleased with the results. However, that effort was very short term and wasn't exactly dramatic. This time, I would document the disappearance of the snow from our back yard, and it would be a National Geographic-worthy bit of cinematic awesomeness.
On Monday morning, I mounted the GoPro camera on a tripod and ran an extension cord from the porch outlet to provide continuous power (I had been previously thwarted in my attempt at an epic time-lapse by short battery life). Here's what the setup looked like: 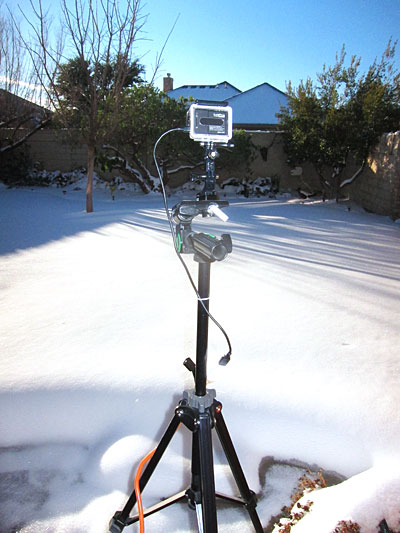 I connected my iPhone to the GoPro via the latter's built-in wifi, and set the camera to take one photo every 60 seconds. I figured it would take the rest of the day for the snow to melt, and I'd have a totally amazing sequence of photos showing the receding snow.
Boy, was I wrong.
Today - seven days later - there's still snow on the ground in the back yard. As it turned out, we continued to have sub-freezing temperatures for most of the week, along with freezing fog and even an additional light snow early on New Year's Day. The snow receded at a positively glacial pace (Ed.-I see what you did there. Stop it.) Most Midlanders I've talked to can't remember a time when a snowfall lasted this long; I certainly can't, but I've only been here three decades.
As a result, I'm now facing a somewhat daunting task of reducing about 8,000 12-megapixel photos into a time-lapse of reasonable length. I assure you that I will achieve that goal and post the results here, but to spare you short-term disappointment I've created something that I think will capture the spirit of the what I'm trying to accomplish, while leaving you hungry for more. In the following professional artist's rendering, think of the white as, you know, snow...and the black as...um...not-snow. (Warning: Tests have shown that staring at the following image too long may cause outrageous hallucinations, such as the Cowboys winning a football game, or Donald Trump's hair looking like something a sane person would wear on his head.)

Stay tuned for what I'm sure will be something unparalleled in cinematic history. Well, at least as far as my back yard is concerned.
Posted on January 3, 2016 2:10 PM

Tivo Problemo was the previous entry in this blog.

UE Boom 2 Bluetooth Speaker is the next entry in this blog.