A.J. Jacobs's first book, The Know-It-All, chronicled his quest to read the Encyclopedia Brittanica from A-to-Z. Jacobs has now extended his version of literary flagpole-sitting to the Bible in The Year of Living Biblically: One Man's Humble Quest to Follow the Bible as Literally as Possible, in which he describes his attempts to adhere to the laws and commandments - Old and New Testament - set forth in the Bible.

Jacobs is a self-described agnostic, a secular Jew who had almost no exposure to religion, Jewish or otherwise. The only Bible he had when he started was a King James Version which he had somehow acquired from an ex-girlfriend, and which he had never opened. But he was intrigued by the apparent fascination of millions (if not billions) of people through time with what was written in the Bible, and chose this method of trying it on for size, so to speak.

His efforts are, of course, a gimmick...a hook to attract attention (hence my earlier reference to flagpole sitting). He also picked a potential minefield to meander through, given the reverence many of us have for God's Word. (Can you imagine someone taking a shot at the Koran in this fashion, for the purpose of writing a humorous book about the experience?) So, you might be surprised that I recommend reading his book, especially if you are a Christian. Here's why.

In addition to being a well-written and entertaining diary of a man trying to live with one foot in the 21st century and the other in 4,000 B.C., Jacobs's observations and experiences provide much food for contemplation. Most of the following items were probably not even on the author's radar screen as he wrote his book, but that doesn't make them any less valid.

Of course, as interesting - and occasionally hilarious - as it might be to watch someone try to shoehorn ancient Jewish traditions into a modern New York City lifestyle, the ultimate question for Christian readers has to be: what about Jesus?

Jacobs lays out his quandary in clear terms: If I don't accept Christ, can I get anything out of the New Testament at all? What if I follow the oral teaching of Jesus but don't worship his as God? Or is that just a fool's errand?

In the end, Jacobs cannot - will not - acknowledge Jesus Christ as the messiah that his forefathers prophesied about, and the Christian reader will find his stance puzzling and disappointing. How can someone dive into the Bible - a book comprised of revelations inspired by God Himself with the overarching purpose of pointing mankind to the Savior - and still come away a non-believer?

Jacobs states that Ecclesiastes is his favorite book in the Bible, presumably because of its pragmatic wisdom and advice. It's ironic then that in his quest to live according to the truths of the Bible, he is unable to recognize The Truth for which the book was written. That, in the end, made his exercise the ultimate "vanity of vanities."

Anne Lamott continues to exasperate - and, occasionally, infuriate - me. Her latest book, Grace (Eventually): Thoughts on Faith, takes up where the previous one left off, and you might recall my less than warm review of that one. I had expectations of a kinder, gentler Lamott for this book, based on the pre-release publicity.

And she is. Sort of.

Lamott claims that she no longer hates George W. Bush, and she goes to great lengths to explain the depths of that hatred so we'll understand the miracle that apparently occurred when she found that she could nobly rise above such feelings. In a chapter entitled "Dandelions," she implies that she was able to release some of her hatred by allowing others to take it up:

And to be honest, it helped beyond words when Bush's approval ratings began to tank. More than anything.

Despite the assertion that such feelings no longer dominated her every waking moment, her references to the President, Dick Cheney, Karl Rove, Tom DeLay, John Ashcroft, et al are sprinkled liberally (ha!) through the book, almost as many times as she mentions Jesus. I find that a little disturbing from a Christian author writing about faith.

I started to enumerate the areas where Lamott's beliefs are diametrically opposed to mine, but that serves no useful purpose. Suffice to say that if you lean toward a view of God that emphasizes His grace and forgiveness, and minimizes His call for holiness, then you'll be at home with her theology.

I'm running out of reasons for continuing to buy her books. I can get all the left-leaning, profanity-laced tirades I want from The Daily Kos or the Huffington Post, without adding the explosiveness of shaky religious doctrine to the mix. But it would be unfair not to acknowledge that when Lamott is good, she is very good, and she continues to strike the occasional soul-chord in fundamental ways.

She's never tried to avoid or gloss over her mistakes and shortcomings, and her vulnerability is something I admire. For example...

I will never know how hard it is to be developmentally disabled, but I do know the sorrow of being ordinary, and that much of our life is spent doing the crazy mental arithmetic of how, at any given moment, we might improve, or at least disguise or present our defects and screw-ups in either more charming or more intimidating ways.

Jealousy always has been my cross, the weakness and woundedness in me that has most often caused me to feel ugly and unlovable, like the Bad Seed. ... I know that when someone gets a big slice of pie, it doesn't mean there's less for me. In fact, I know that there isn't even a pie, that there's plenty to go around, enough food and love and air.

But I don't believe it for a second.

I secretly believe there's a pie. I will go to my grave brandishing a fork.

Anne Lamott has always been a gifted writer, and one could do worse when picking an author to study for the sheer craftsmanship of the work. But with this third book in a series on faith, the anecdotes are starting to seem repetitious (and some just sort of trail off into obscurity without any apparent point). And that's a shame, because up until now, I could overlook what I believe to be skewed doctrine for the overall uplifting experience of her writing. That's no longer the case. Now that I find that last thing missing, I've no reason to anticipate her future books.

Cindy Hammond sent me the following report on how the local teams did in the recently completed "Destination Imagination" global finals (read this post for the back story):
Over 1000 teams from the US, UK, Canada, China, Finland, Turkey, Poland, Singapore, Mexico, Guatemala, etc. competed in the Destination Imagination Global Finals held on the campus of the University of Tennessee. Midland Teams fared very well this year. Our 9th graders placed 3rd out of 60 teams in the challenge "DI've Got a Secret." Their team known as "DOUGITIT" competed at the high school level against other 9-12 graders. The 5th graders, "The 6 Oddballs," placed 10th out of 80 teams in the challenge "Hit or Myth." The 5th grade team placed 2nd in their instant challenge component - which is a very difficult thing to achieve! 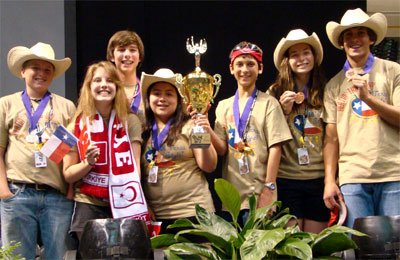 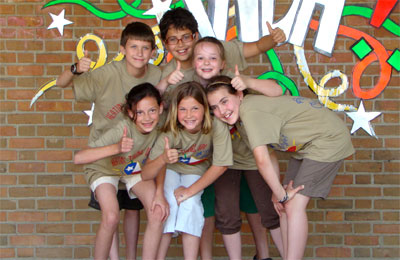 These smart, creative, and cute kids remind me a lot of myself when I was their age, except for the, um, smart, creative, and cute part. The only thing that puzzles me is why the 9th grade team chose to hold up a trophy instead of a Fire Ant Gazette coaster. Obviously, these kids still have a few lessons to learn about priorities!
For more about this program, visit the official DI website.
« May 2008 | Main Index | Archives | July 2008 »
Search the Gazette:

This page is an archive of entries from June 2008 listed from newest to oldest.