Perhaps someday I'll come up with a topic that (1) is interesting and (b) I know something about, but until that [unlikely] event occurs, here's more random goodness from the interwebz: 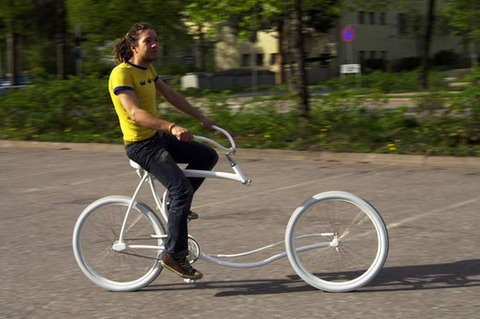 I'm pretty sure that if we were to see this bike from the other side, we could confirm that there's a steering tube that connects the handlebars to the front wheel via a series of linkages that aren't visible from this side. Our recumbent tandem uses a similar setup for steering. (We look just as weird riding it, but in a different way.) [Via Soup.io]

I've got more, but since I haven't implemented the jQuery Endless Crap™ plugin, let's just conclude it here, shall we? Have a great weekend!

*Update: I've removed the link to Soup.io because the site contains some material that's inappropriate for the informal PG rating of the Gazette. I apologize if you stumbled across some of it; the site is an aggregator, pulling content from a variety of sources, and you never know what's going to appear.

I'm way behind commenting on this but I just have to let someone know I hate people who write "Chillaxin" more. That's a word I would like to see go.

Fascinating Animation is the next entry in this blog.