That's the definition given on the Tilt-Shift Photography website. You can view tens of thousands of examples on the Flickr group dedicated to the technique. Here's my own initial attempt: 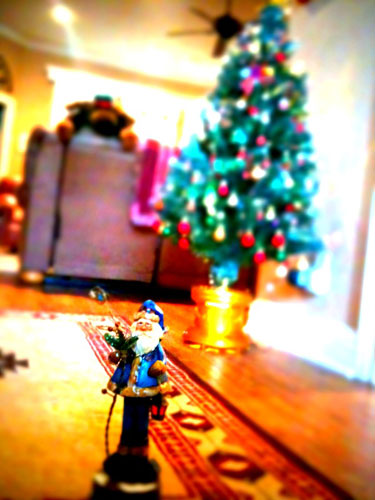 OK, so it's not such a great example, but considering that I took it with my iPhone, and touched up the original photo in about 30 seconds using TiltShift Generator for iPhone*, I think it ended up being an eye-catching image.

According to Wikipedia, tilt/shift lenses were originally developed for perspective control in architectural photography, but the results can now be roughly duplicated with software. In addition, the term "tilt shift" has been appropriated - and, perhaps, misappropriated - to apply to photos containing areas of selective focus. In this regard, the "Snow Bunny" photo I posted yesterday qualifies as tilt shift because I used Photoshop to selectively sharpen some areas of the image while blurring others (although to be fair to my camera, I only "enhanced" the natural depth of field in the original photo).

This technique won't appeal to everyone, but I like the effect of combining selective focus with oversaturated colors to give a sort of garish, retro look to otherwise mundane scenes. I want to experiment further with tilt shift; please be patient.

*Tilt-shift effects are relatively easy to achieve in Photoshop and similar desktop image editing applications, but you really need a dedicated app to replicate the technique on your iPhone.
Posted on December 5, 2009 9:14 AM

And as long as we're showcasing cute animals... was the previous entry in this blog.

Gallery Additions - Snowfall Images is the next entry in this blog.