Last Monday, February 21, we made a day trip to Fort Stockton to visit family, and were pleased to see that Comanche Springs was again flowing. This is a fairly dependable annual occurrence each winter, when the agricultural irrigation west of town ceases and the water level in the aquifer rises sufficiently for the water to exit at several surface locations in Rooney Park.

In light of an ongoing battle concerning local water rights - and specifically a proposal to pipe up to 42 million gallons per day from Fort Stockton to Midland - there's a legitimate concern about whether we'll ever again see the springs flow like this. While studies seem to indicate that the aquifer continually recharges, I doubt that it does so to an extent that will permit exit to the surface. I decided to document the output of the springs from beginning to end.

Click on each photo to view a larger version. You can also navigate through the entire suite of pictures if you wish to skip the commentary.

As I mentioned above, the springs come up in several locations around Rooney Park. These sources look like big holes in the ground containing standing water; the flow of the stream is not readily evident, and in fact the water looks like algae-laden runoff. It gets much better. 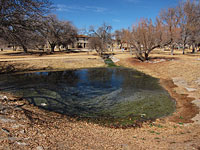 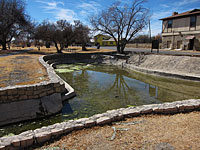 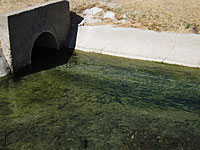 The third source (the exit from which shown at right above) is at the swimming pool and long-time visitors to the pool will remember the metal cage around it. It's been there for many decades, as evidenced by the undated photo shown below that I borrowed from a caver website. [Comanche Springs Cave is a lightly-explored but quite extensive series of caverns and tunnels that were carved out by the flow of the springs. Some theorize that the system might be as much as 100 miles in length. Exploration is made difficult by the unpredictability of the water table.] 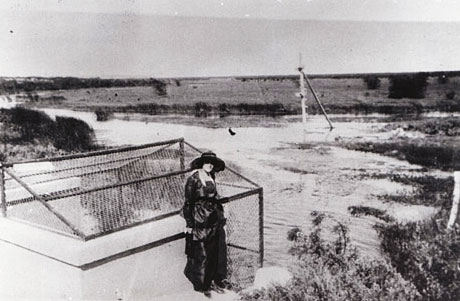 Rooney Park is bisected by a canal that runs from the southwest corner of the park past the swimming pool and exits the park at the northeast corner. Water from the springs is channeled into the canal. The photo on the left shows the beginning section, and the one on the right is exiting the park. The bridge in the background is on the Sanderson Highway (Highway 285). As you can see, the water level in the canal has risen considerably by this point. 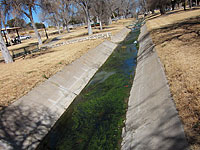 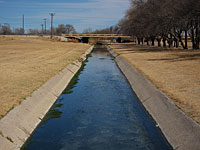 After exiting the park, the finished portion of the canal comes to an end just east of the Highway 285 bridge. 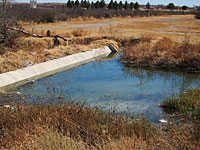 As I stood on a concrete embankment overlooking this "pond," a hawk flew out of the underbrush at the left and passed me at eye level, not fifty feet away. It happened too quickly to get a photo, but I was transfixed by the sight.

From here, the stream wanders east and north, eventually flowing under East Dickinson Blvd (aka East 9th Street, aka Business I-10). The satellite photo below clearly shows the meandering nature of the stream. It also demonstrates the life-giving effect of live water in a desert environment.

View Larger Map
Following are pictures of the stream at the East Dickinson bridge. In the middle photo, you can see that the water is a welcome attraction to overwintering waterfowl. The third shows the water flowing along the highway right-of-way just before it runs under the bridge, heading north. 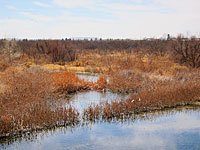 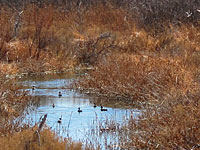 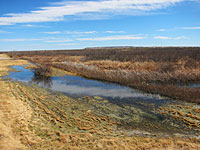 The stream continues northeast and crosses under Interstate 10, where it flows across the service road. 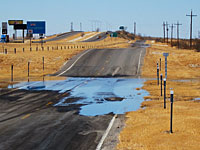 We can infer from the above photo that the flow of water is a limited seasonal event; otherwise, the city/county/state (jurisdiction isn't clear to me) would construct a bridge or tunnel to deal with the stream.

From here, the water flows into a privately-owned pasture* and empties into what I believe is a caliche pit. I'm not positive about that, but I do know that alert travelers along I-10 can catch a glimpse of what looks like a very small lake just north of the highway. Whether this is a playa lake or a pit is unknown to me; readers with knowledge about this are invited to share in the comments section. Again, though, we can turn to Google's satellite photo that seems to indicate that the end point is more of a depression than a pit. Zoom in on the map below to see what I mean. [Update: I stand corrected. That large whitish area on the satellite photo does appear to be a pit; it's dry in this version of the photo. But the stream also appears to continue north and then east (follow the green "trail," where it sort of peters out. That's what I initially looked at.]

View Larger Map
In any event, by this point the stream was flowing vigorously, and running water through a West Texas pasture is a beautiful sight. 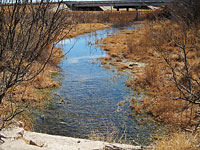 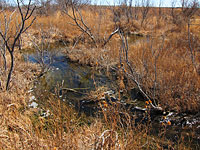 If you look closely at the third photo, you'll see where ducks took off from the water after I startled them; they're flying in the distance.

I shot the following short video with my Canon point-and-shoot to provide an idea of the strength of the stream's flow at this point.

It's been estimated that Comanche Springs once flowed at a rate of 60 million gallons per day or more. According to a 2009 report in the Fort Stockton Pioneer (link no longer available), the flow was estimated at 1.5 million gallons per day, on average, but subject to significant daily variation. That's still a pretty hefty stream in the desert. And the question of whether it's better to let this natural flow continue, benefiting "only" wildlife and pasture, or to capture it and send it to a city whose water supply is dwindling is a legitimate one. Regardless of the outcome of the debate, we should enjoy the beauty of Comanche Springs whenever the opportunity occurs.

*Full disclosure: I'm pretty sure I was trespassing in order to take the photos and videos in the pasture. Although I didn't see a "Posted" or "No Trespassing" sign, the fact that I stepped over a fence to gain access means that I went where I shouldn't have gone. If I had planned this trip, I would have contacted the landowner for permission, and I have no doubt it would have been granted. As it is, I have no excuse, other than a desire to share this special phenomenon with others. You should not follow my example.

Pi Plate is the next entry in this blog.