It's important to keep the Historical Records up to date, so here's what's happening in the front part of la hacienda:
Barn Swallows - When last we checked in on the little #@*%& fellows, their nest was almost complete. It's now finished and positioned so close to the ceiling that we can't see inside the nest, even with our tallest ladder. They think they're so smart, but they underestimate the vastness of my tool inventory, specifically the small round mirror mounted on the telescoping, articulating arm. (I knew I'd have a use for that someday, besides helping me locate stuff that I drop behind the workbench.)
So, here's what's inside the mysterious nest: 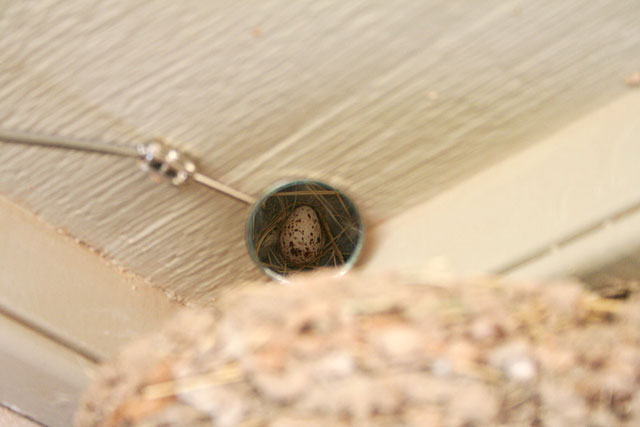 Interesting that there's only one egg in the nest. I thought they usually had a multi-egg clutches.
By the way, I hope you're impressed by the photo, as I stood near the top of a 12-foot ladder, holding the mirror in one hand and the camera in the other, while Debbie re-read my life insurance policy.
Moving on to the flora, I'm pleased to report that our pomegranate-tree-reborn-as-a-bush is growing like a weed, which it is, by definition. Anyway, we put this funky three-sided tomato cage around it to tame its wildness, and it's now 3' tall. Pretty sure it won't have any fruit this year, but we're hopeful about 2012, assuming the world doesn't end. 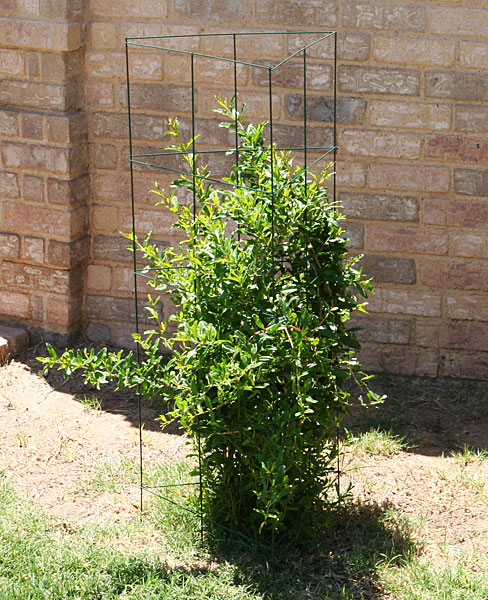 And, finally, our palm tree has fully recovered from its close encounter of the frostbite kind. It's still a bit lopsided from where Debbie had to prune the dead fronds following that bitter freeze (feels a bit weird to be writing about it, given that it's around 100° as I type this). 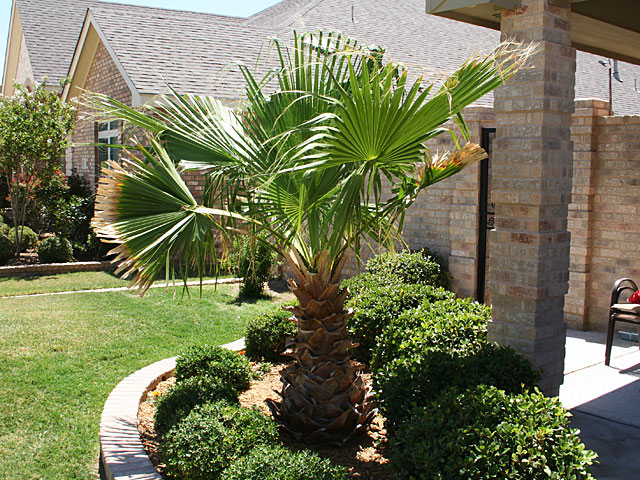 By the way, don't let the apparently green grass in our lawn fool you; it's becoming increasingly heat-stressed due to the watering restrictions. I'm not sure why it looks this good; the back lawn is more brown than green. And based on the long range weather forecast, it's going to get worse before it gets better. Pray for rain!
Posted on May 28, 2011 12:59 PM | 4 Comments

You can't fool me with all of those gadgets you retain. Your true identity is..... Eric MacGyver! ;)

Seago Palms and similar tropical vegetation all have suffered from this past winter's frosty bite. In fact the past two winters have been cold enough in East Texas to burn back the old fronds.

John, we have three varieties of palms on the grounds of Fire Ant Manse. One was killed back to ground level (but is coming up from the roots), the second was knocked back a bit, and the third wasn't really fazed. But there were a bunch of high-dollar landscapes around town, both residential and commercial, featuring tropical palms that were just decimated.

I'd be happy to send you some of our rain as we have certainly had enough. Last night, while watching the weather forecast, I actually heard the meteorologist say, "No more rain, please"! We are awaiting flooding in my neck of the woods but many northern parts of the state already have it. Anyway, I'll see what I can work out for you. :-)

We'll take any and all excess rain off your hands (and feet and face and any other places, for that matter!). Even in the desert, a half inch of rain in 8 months is just ridiculous!

Dancing With The Stars, You're Dead to Me was the previous entry in this blog.

Random Holiday Nature Scenes is the next entry in this blog.