Last night's dinner at Poehi's was quite pleasant, with the combination of a open-air bayside table (where we watched an enterprising pelican gulp down his own fresh seafood) and good food. I had a pretty straightforward fresh salmon fillet, grilled with olive oil, but the real star of the meal was my salad, of all things.

It started with a thin bed of field greens, on top of which four thick slices of beefsteak tomatoes -- the kind we can't get in Midland -- were laid out in a row. The tomatoes were topped with a combination of blue cheese sprinkles, shreds of bacon, and drizzled balsamic vinegar. That alone would have made it a good dish, but then each tomato slice was adorned with a French-fried onion ring, which elevated the dish into the realm of greatness.

Compliments to the chef for a delicious bit of simple culinary imagination!

The Art-Producing Instrument As Art

I have a fairly open mind when it comes to art, or, more specifically, what constitutes art. The human imagination is a wonderful and mysterious force, and when it's imposed on physical materials in unexpected ways, it evokes a wide range of emotions and reactions from the beholder.
Such as...what the...? 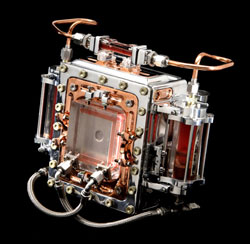 I can't recall how I ran across this website, but it belongs to a guy whose art medium is cameras. He builds functioning cameras that make a statement about issues he's passionate about. His creations are elaborate, and incorporate both inorganic and organic materials, juxtaposed in ways to shock and/or amaze.
For example, the camera at right incorporates an actual sample of blood from an HIV+ patient. The blood becomes a #25 red filter, and the photos it produces are eerie, to say the least. Other cameras incorporate insects, "sea creatures," human skulls, and assorted "found" parts. The craftsmanship that goes into each camera is as sophisticated as the imagination that conceived it.
As I mentioned, these are all functioning cameras. If you visit the site, be sure to check out the sample photos taken with each model, as they constitute a different kind of artwork.
Be the 1st to Comment

Another 15 seconds of "fame"

Remember this post? No? Can't say that I blame you; it dealt with some pretty obscure subject matter. 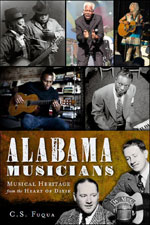 Well, unless you're a musician and music historian who's writing a scholarly book about the musicians of Alabama including Gene Sullivan and who had almost despaired of finding a photograph of Mr. Sullivan...until he stumbled across this here blog-like thing. And if you do happen to be Mr. C.S. Fuqua, you might just want to include the scanned photograph from the Gazette in Alabama Musicians: Musical Heritage from the Heart of Dixie, which is scheduled for publication this week and will be available from Amazon.com, Barnes & Noble, and the publisher's website.
Mr. Fuqua was kind enough to notify me today via email of the book's impending publication, and to send along a PDF of the book cover and the section of the book about Gene Sullivan. I particularly liked the accompanying image. 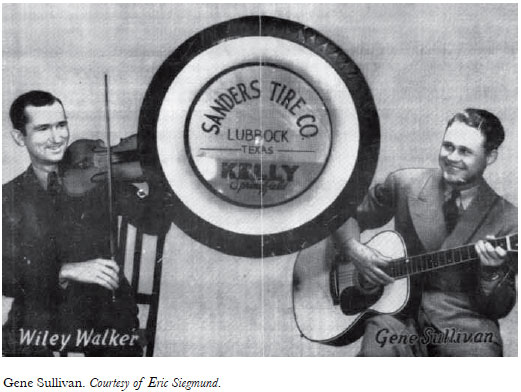 It looks like an interesting book. I'm going to order two copies. One for me to read, and one for my mom, because she'd never forgive me if I didn't.
Also, it's just another reason why I keep blogging (however sporadically)...you never know when even an obscure post will touch a nerve or fill a need for someone else.
Be the 1st to Comment

Ditch or Pipeline? Neither is likely to help our water situation.

As parts of the country endure flooding while other regions continue to suffer from a history-making drought and water shortage, it's logical to wonder why we can't figure out a way to move some of that water from one area to the other. Associated Press Science writer  Seth Borenstein writes that the idea is simply not feasible, either economically or politically. The article is a good high-level survey of some of the arguments against this redistribution scheme, but it's a bit short on specifics. 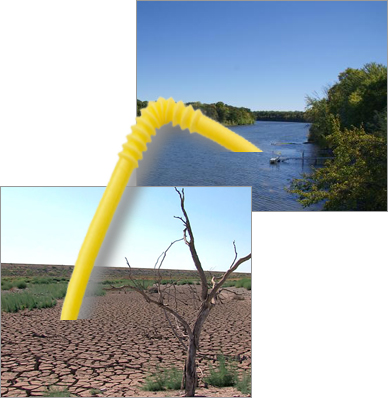 The politics and legal issues of the situation are possibly insurmountable, but the cost of building infrastructure that could transport enough water to make a difference is just mind-boggling.

I've not seen a cost estimate for a massive water transport project, but with a little back-of-the-envelope calculating, it's possible to create an order-of-magnitude guess by using another massive and well-known project as a comparison: The Trans-Alaska Pipeline (TAPS), completed in 1977 to move crude oil from the North Slope of Alaska to Port Valdez in south Alaska.

TAPS consists of a 48" pipeline stretching for 800 miles. It cost about $8 billion in 1977 dollars, and has a capacity of around 2, 000,000 barrels per day (equivalent to 84 million gallons per day). The crude oil that the pipeline transports weighs about 7.4 pounds per gallon.

Using these facts and some additional assumptions, we can paint a very primitive picture of what it would entail to build a similar pipeline to transport water.  Let's assume that we want to grab water from the mighty Mississippi River and move it to Lake O.H. Ivie in west central Texas, a major source of water for Midland. We'll use Vicksburg, Mississippi as the assumed origin of the pipeline, since it's roughly at the same latitude as the end point.

It's about 600 miles from Vicksburg to the lake. All things being equal, the cost of the pipeline would be $22.5 billion, based on the inflation-adjusted cost of TAPS ($30 billion for 800 miles). You could rightly argue that the rough Alaskan terrain inflated the TAPS cost considerably; drastic elevation changes required expensive pump stations, and other factors such as weather, water crossings, environmental safeguards, etc. drove up the cost.

However, the TAPS project had one huge advantage that our MS-to-TX project wouldn't have: less than 10% of the land crossed by the pipeline was privately owned; the rest is state- or federal-government owned. While I have no doubt some rather intense negotiations went on to get easements across those lands, it must have been a cakewalk compared to getting easements from potentially hundreds or thousands of landowners between Texas and Mississippi.

There are a couple of additional considerations to complicate things. Water is heavier than crude oil (at least the crude produced from the North Slope of Alaska). Pumps have to be bigger to move the increased weight. (Also, scientists created a substance that was mixed in with the oil to make it slide more easily through the pipeline ­- known in the trade as "slickum" - that reduced the required pumping capacity, but I'm pretty sure you wouldn't want it mixed in with your drinking water.)

So, if a pipeline doesn't provide the necessary capacity, what about digging a big ditch? Canal systems have been used for centuries to distribute water.  I have no idea what it might cost to dig a canal from Mississippi to Texas, but the logistical issues are probably many times more complicated (it's comparatively easy to run a pipeline under an interstate, for example). Then there's the issue of elevation change. Vicksburg is essentially at sea level; O.H. Ivie is about 1,500' higher. With few exceptions, water runs downhill, and you have to convince it to do otherwise. I'm sure there are some engineers in the audience who can compute the horsepower needed for pumps that will move a few hundred million gallons of water per day uphill. I can't, but I'm guessing it's a bunch (sorry to have to use such technical terminology).

Having said all of this, I suspect that if we were starting with a blank slate today, we'd conclude that our current interstate highway system could not be built, due to imposing economic and political roadblocks (pun intended). A national water distribution system is achievable, but I doubt we have the national resolve to make it happen.

Some of you Midlanders (and former Midlanders) might be interested in the following view of the construction going on at First Baptist Church. 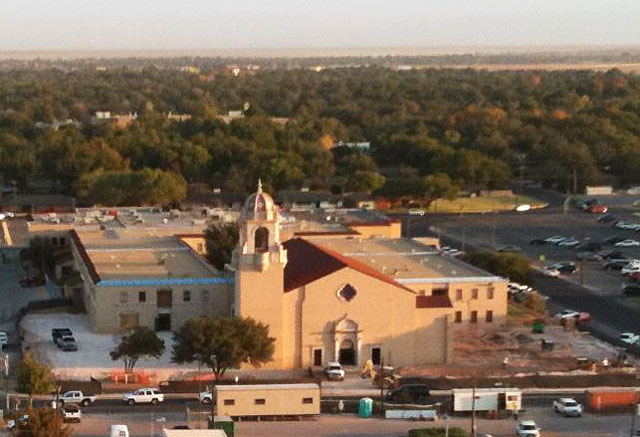 The new welcome center will go in where the truck is parked on the left side of the photo; the new chapel is on the opposite side of the property. They've been working on this for more than a month; I expected to see more progress than this, but I guess there's a lot of preparatory work involved.
This picture was taken from the top of another prominent building in Midland that's under construction: the new patient tower at Midland Memorial Hospital.
1 Comment 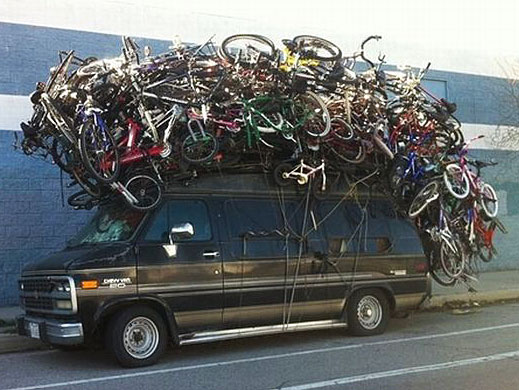 Photographer unknown
I'm just not sure I can afford the bungee cords.
Be the 1st to Comment

Desalination a solution for our water woes? Uh, not so fast...

As we creep inexorably toward the one-year mark without meaningful rainfall (how mind-boggling is that, anyway?), ideas that were once bandied about in sci-fi mode now start to take on some semblance of credibility. Like, for example, the idea that we have plenty of water available to Texas, it's just a bit on the salty side. So, let's build some big honkin' desalination plants like Saudi Arabia has and we can solve a bunch of our water shortage issues.
Unfortunately, the reality is depressingly ironic. As this Reuters article points out, the Saudis are starting to worry more about peak water than peak oil, and the cost of desalination is starting to make a significant dent in their oil-derived riches.
It's an understatement to say that the Saudis are ginning out a lot of desalinated water. The quoted figure of 3.36 million cubic meters per day equates to almost 900 million gallons per day, enough to supply the equivalent of five cities the size of Midland with their entire water usage. The problem is the expense of producing that water. Using today's currency exchange rate, it's costing almost $2.4 million per day to make the water, and that doesn't include the cost of transporting it.
Of course, the Saudis are hit with a "double dip," as they're using oil and gas to produce the water that they would otherwise have been selling to us. The article estimates that about half the cost of desalination is energy-related.
Desalination is still something that needs to be considered as a way of mitigating the effects of our extreme drought, but it's not only a long-term solution, but also an expensive one. On the other hand, all the cheap alternatives are gone.
3 Comments

Reflections on Two Weeks of Employment...

So, a little more than two weeks ago I left the ranks of the self-unemployed freelancers and rejoined the corporate rat race (or drone drama; take your pick), and I'm gradually beginning to feel like I didn't make The Worst Decision Evah.
Yeah, it's been a fairly painful transition, but it wasn't unexpected. And every passing day takes me a little further away from the easy living/low paying work-from-home routine. I realize that the pain springs primarily from the comparison of what came before, and as those memories fade, so too will the discomfort.
I'm not comfortable writing about many specifics regarding my job or my employer, which puts quite a crimp in my blogging aspirations, but it is what it is. But here are a few random observations about my new life:
Of course, the upside to all of this comes every other Friday. A steady paycheck is the best way I know to calm the raging seas of Second Thoughts. Oh, and let's not forget the brilliant concept of Paid Vacation, something I haven't experienced this century. Yeah, life is good...and gets better all the time!
« August 2011 | Main Index | Archives | October 2011 »
Search the Gazette:

This page is an archive of entries from September 2011 listed from newest to oldest.

August 2011 is the previous archive.