It's been a while since I inflicted a Random Thursday post on you. Sorry; the vacation is over. 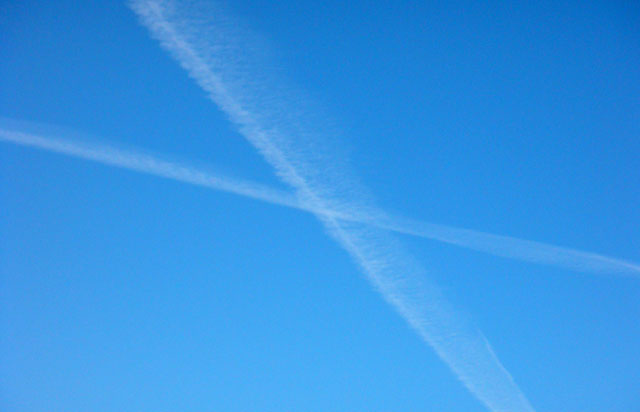 Speaking of iPads... I don't recall seeing you mention the More/Real stylus cap after you got it. Do you like/use it? I was disappointed in it as it seems to have too much drag to draw freely. I'm still looking (although not very conscientiously) for a good stylus for the iPad.

Les, I'm glad you mentioned that...I've been meaning to write about it and just haven't gotten around to it. I agree with you; I'm disappointed in it. I thought it would be more responsive. Even using it for "tap-typing" is sub-optimal. Perhaps my expectations are too high. I doubt that I'll use it very much.

Weird: I just picked up today's mail and there's a new "firm tip" in an envelope from Lehman. Not weird: I can't find my stylus.

Really? Mine came with a second, firm replacement tip. Doesn't seem to make a huge difference, tho.

If you're really interested in the jet trails, here's a short article:

I finally found my stylus... This new tip I got from Lehman is different than the two types he sent with the original stylus. It's very slick and has a matte look that reminds me a little of teflon. Where the original tips looked and felt like rubber - and had the drag you'd expect of rubber, the new tip really glides across the screen. It's a big improvement but drawing/writing on the iPad is still not comfortable for me.

Eric, thanks for the link. I figured it was something like that. I suppose there are a lot of military jets flying around that we never notice until the conditions are right for lingering contrails.

Les, that's interesting. I wonder if all the backers will eventually get one of those tips. I'd at least like to try it out, although I'm not sure I'll ever use a stylus like I thought I would.

I got a plain bluetooth keyboard for the iPad and I can't decide if it's better than one that is "attached" to the pad via the case, like you have. Oh yes, I so need to get another gadget :)

Patti, here's my take. The Apple Bluetooth keyboard is much superior to the Zagg from a typist's perspective. I'd hate to try to write a novel (or even a short story) with the latter; it's just too small for my hands. But for convenience, the Zagg is just hard to beat. If you want to do a little work or play at a coffee shop or bookstore, it's my first choice.

That said, the Zagg also has some dedicated keys just for the iPad that enhances its usefulness.

Mocking Bird was the previous entry in this blog.

Hydraulic Fracturing Chemical Disclosure: Too much information? is the next entry in this blog.