In an unprecedented and probably unrepeatable display of common sense, I decided to no longer venture onto the roof to hang Christmas lights. I'm going to use a pogo stick.
OK, just kidding. About the pogo stick, not the roof climbing. I feel confident that I could continue to walk around on the roof, untethered, leaning over the eaves to insert those little plastic tabs under the shingles, but why tempt fate? The roof line isn't getting any flatter, nor the ground below any softer. But we still need Christmas lights - we've always had Christmas lights - so I took a different approach this year.
Instead of painstakingly hanging several hundred lights along the eaves, one at a time, I elected to mount them around our windows and brick arches.
Painstakingly.
One at a time.
Using a hot glue gun.
Several hundred.
So, instead of killing myself, I just killed time. Seems like a reasonable trade-off, doesn't it?Actually, I think they turned out pretty well...appropriately festive without being too gaudy.

Incidentally, while the camera in the iPhone 4s isn't a terrific low-light instrument, it still yields a passably pleasing image, and the new Panorama mode is the bees knees.
We also found a sparkly fake Christmas tree in Fort Stockton, reminiscent of those tinsel trees that were so popular back in the swinging Sixties. This one works for us because it's, well, flat. 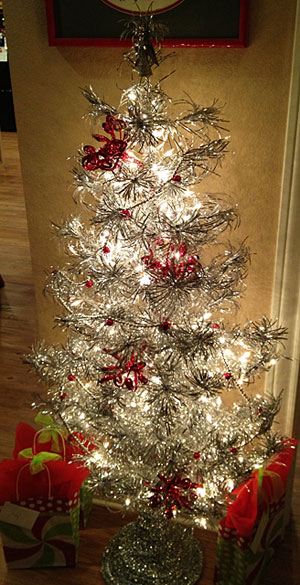 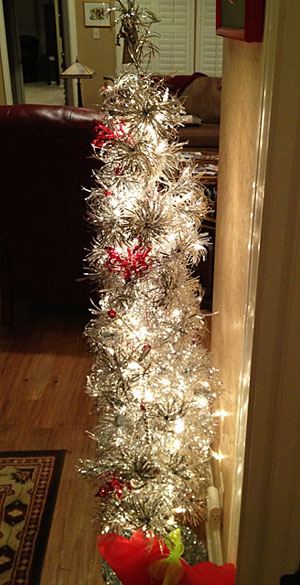 We don't have a lot of free floor space that's appropriate for an old-fashioned, conventional, fuddy-duddy round tree, so this one works well, especially when viewed from the right perspective. Kudos to Debbie for adding the lights and the odd decorations that look like crimson squid (which, I'm sure, is a traditional addition to a nativity scene in some culture, somewhere).
My only regret is that we left the plush toy that sings Grandma Got Run Over By A Reindeer in Fort Stockton.
Posted on November 25, 2012 7:51 PM | No Comments

Dad: A Major Award was the previous entry in this blog.

Ask and Ye Shall Receiver, or Not is the next entry in this blog.