I'm a sucker for sculptures constructed from found objects. Are they art? I'll leave that debate to those who know what they're talking about, but I find such pieces to be a pleasant addition to my environment, and that's all I demand from my art. I also like the idea of making something whimsical for no practical purpose whatsoever (forgive the redundancy, and try not to apply that test to the Gazette).
Anyway, when we discovered the Artisans at Rocky Hill Gallery in Fredericksburg, Texas, a week or so ago, I felt like a crackhead who'd just won a free house in East L.A. (no offense to East L.Aliens, or to crackheads, for that matter). The gallery is chock-full of cool stuff (a technical art term) and if we ever figure out how to make "spending our way into prosperity" into a workable financial strategy, I know just where to start.
I thought I showed remarkable restraint when we walked out of the joint with only one piece...but what a piece it is: 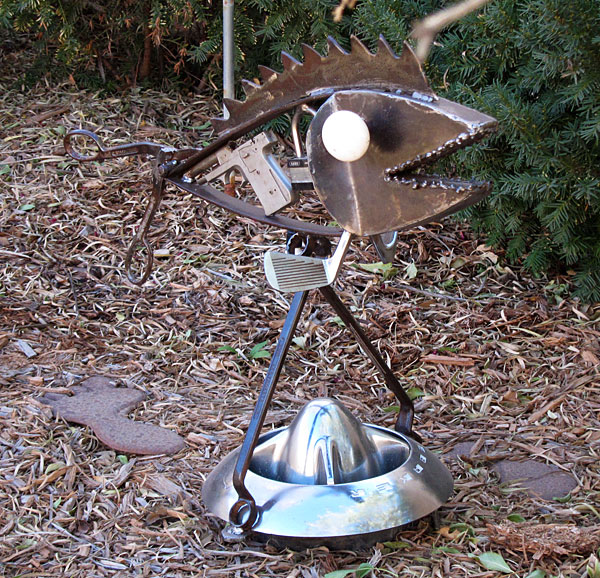 This construction is entitled "1949 Studebaker Nose Cone Fish." The name is interesting not simply because the base of the sculpture is the nosepiece from a Studebaker, but also because all the photos and text I've found indicate that this particular style didn't appear until 1950. So, either time travel was involved in its creation, or we should chalk the title up to artistic license. Personally, I like the former theory, but I'm not entirely objective.
As you can probably discern from the photo, the fish has golf club heads for fins, a pair of tin snips for a tail, and old ceramic door knobs for eyes. The dorsal fin appears to be a section from a big honkin' saw blade. Two boxend wrenches serve as the "legs." And nestled in the belly of the fish is a padlock and a handgun. [Insert hipsterish Noah joke here.]
The artist is a man named Terry Jones, and he calls the east Texas town of Jewett his home. Many of his sculptures incorporate [non-functioning] firearms. Jones works with several law enforcement agencies to "decommission" guns that have been seized in raids, and in return for this service, he's allowed to use them in his creations. 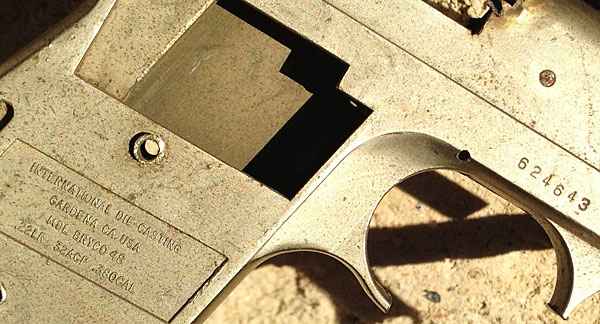 I did a little gumshoe work and discovered that the handgun in this piece is the chassis of a Bryco 48 .380 semi-auto, a cheap (in every sense of the word) "Saturday Night Special" with a rep for finding its way into all sorts of nefarious endeavors. It's not surprising that it ended up in one of these sculptures. And if you were the former owner of Bryco 48 #624643, well, shame on you.
The fish is one of Jones's more playful works; some are simply stunning in their intricacy and flowing design. If you happen to find yourself in Fredericksburg - or in another of the galleries that carry his work - be sure to take a look. You also might find yourself enhancing your yard art* collection.
*Uh, let's let this be our little secret, m'kay? I'm not sure that Mr. Jones intended for this particular piece to be planted under a Mexican Elder tree in West Texas.
Posted on December 22, 2012 7:15 AM | No Comments

New Dance Studio Coming to Midland was the previous entry in this blog.

Behold our newborn King! is the next entry in this blog.