My Spiritual Gift is Contortion

We met as a congregation in our fourth location in the past 18 months, as we continue to deal with the inconveniences of a major remodeling/expansion program, complicated by a fire in end of the church not being worked on.
Today, we assembled in the auditorium of Midland Lee High School, a location where we expect to be every Sunday until construction is completed on the main campus in March. It's a pretty comfortable setting, and with a capacity of about 1,600 (including the balcony), it should accommodate our normal crowd. And the fact that its primary color scheme is maroon and white is an added plus for some of us (and one that God obviously approves of).
Here's a photo of the stage and part of the floor, taken before the services from the camera stand where I set up shop this morning. 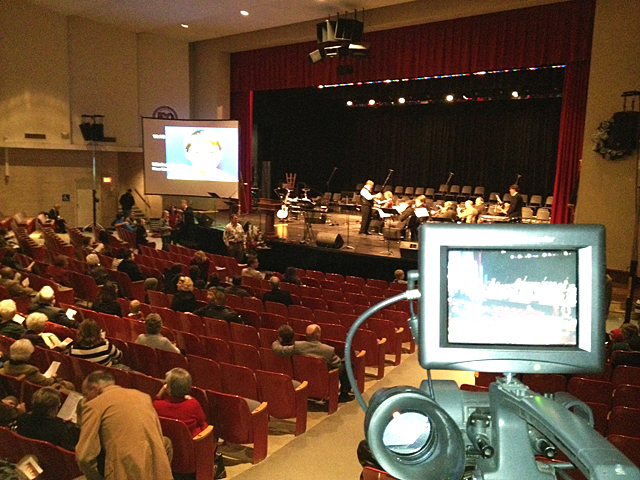 It's not without its inconveniences, however, especially from the media crew's perspective. While one of those challenges isn't a shaky camera stand, there are other issues. Take a look at this picture: 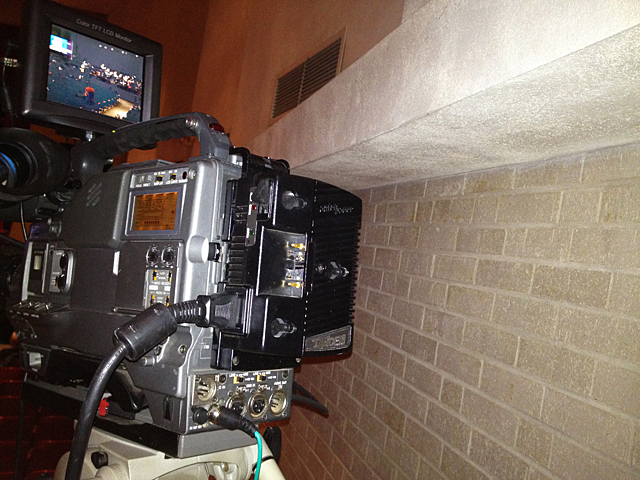 See that "decorative" concrete shelf that runs the length of the auditorium wall, and how it appears to be right on top of the camera? Well, that's not all due to the perspective of the photo...that shelf is indeed almost on top of the camera. I spent almost the entire service with one shoulder touching the brick wall, with my head tilted slightly to the left as the right side of my noggin was up against the concrete.
Fortunately, while we're taping the services, we're not broadcasting them, so the general TV-viewing public will never experience the less-than-stellar camera/lighting/audio work that comes with the territory where everything must be assembled the night before, and then broken down and moved after the service, only to be repeated the next Sunday.
I'm confident the major bugs will be worked out, but it may be an interesting three months. And, of course, if hash tags had any relevance on the Gazette, the appropriate one for this post would be #1stworldproblems. Wish they were all that easy to cope with.
The real blessing is that our congregation continues to attract new members, regardless of where we're meeting. That might be a lesson worth dwelling on.
Posted on January 6, 2013 2:10 PM | No Comments

Elizabeth Cooks...musically speaking, that is was the previous entry in this blog.

Reason #437 why I'm not in public relations is the next entry in this blog.