At the time of this writing, if you type "Betsy" into the Google search bar, "Betsy Andreu" comes up as the second suggested phrase, behind only Betsey Johnson, which makes no 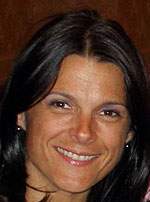 sense at all because the two names are spelled differently, and I would expect that Big Brother would be well aware that I couldn't care less about some ditzy fashion designer.
Anyway, if the name Betsy Andreu doesn't ring a bell, don't feel badly; that probably means that you don't follow Lance Armstrong on Twitter. She's the wife of professional cyclist and former Armstrong teammate Frankie Andreu, and she's the Cycling Spouse From Hell. At least, that's how Armstrong characterized her for years.
See, Betsy was the one person who early on went public with her educated opinion that Lance was doping. She paid a heavy price in the court of public opinion for her steadfast pronouncements that Armstrong was a manipulative, lying SOB. You know that song phrase, "you don't tug on Superman's cape"? Betsy not only pulled on it, she hitched it to a monster truck and tried to drag it around a rodeo arena. For her efforts, she was painted by the Armstrong cartel as deranged and psychotic, and a gullible press and fandom bought the story. And her husband's cycling career was derailed; Superman can kick butt when he wishes.
Well, guess who's vindicated...somewhat. Betsy's not completely satisfied with Armstrong's admissions of guilt - she thinks they don't go far enough - but surely she feels that the years of being viewed as the equivalent of the crazy shopping cart lady who talks to lamp posts has a somewhat happy ending.
Or, maybe not. Read this interview with her on the Sports Illustrated website and decide for yourself.
Maybe she isn't satisfied with the admissions; I can't say as I blame her. But she told the truth when it wasn't popular (or believable) and that seems to be a rare thing nowadays.
Posted on January 18, 2013 4:45 PM | No Comments

Two Things: Lance / Missy was the previous entry in this blog.

Life Hacks (or, Solutions to First World Problems) is the next entry in this blog.