We've got a lot of ground to cover today, kiddies, so try to keep up.

What the internet needs is way more anonymity...said no one, ever. OK, that's not entirely true, as the creators of Spraffl obviously feel that personalization in social media is overrated, and have created an iPhone app (Android coming soon) that will allow the posting of anonymous observations anywhere, anytime, and about any subject. Think of it as the ultimate playground for trolls.
Or maybe not. Even the Spraffl guys are apparently a little gunshy about all this freedom, and have built in a process whereby the community can get you kicked off the service for posting stuff that offends or just annoys someone else. Yeah, what could possibly go wrong with that?
So, when I first heard about Spraff, I'm like, well, what's the point...who wants to get involved with something like that? Turns out that I sort of do. I downloaded the app as an experiment and - whaddayaknow? - it's a little addictive (albeit more than a little weird). Here's my first Spraff (side note: is there an unwritten rule that social media posts must have silly names?): 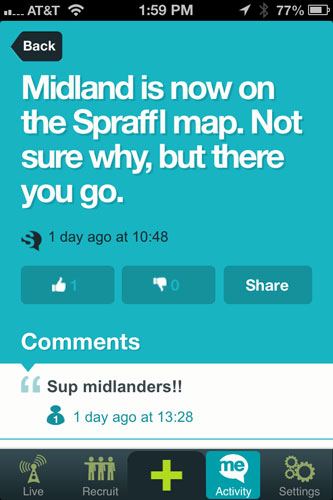 Because Spraffl shows a map of the locations of all spraffs, I could tell that my post was the first one in Midland (albeit not the first one in West Texas; there's apparently at least one spraffer in Lamesa, of all places). I could also ascertain that it was one of the first ten in the entire state of Texas, so I've go that going for me...you know, in case the service ever gains Twitter-like stature.
But, you see the problem with being an early adopter, don't you? I just blew my anonymity, or at least my assumption of invisibility, because now any posting from Midland will be attributed to me, at least until some critical mass of users is reached. The app attaches a location to each post, so your anonymity doesn't extend to geography unless you disable Location Services, which in turns cripples the app.
So, what's my prediction for the success of Spraffl? I give it about a 1% chance of success, as it seems designed to fill a hole that few fear falling into. But don't tell anyone I said that; I value my anonymity.
I posted the following photo on Facebook but have been asked to blog it as well. We've had several sightings of foxes in our neighborhood recently, and last week our next door neighbor glanced out her window and saw this little guy napping in the back yard. She said there was a second one who may have either been a lookout or responsible for finding dinner, because he didn't hang around much. 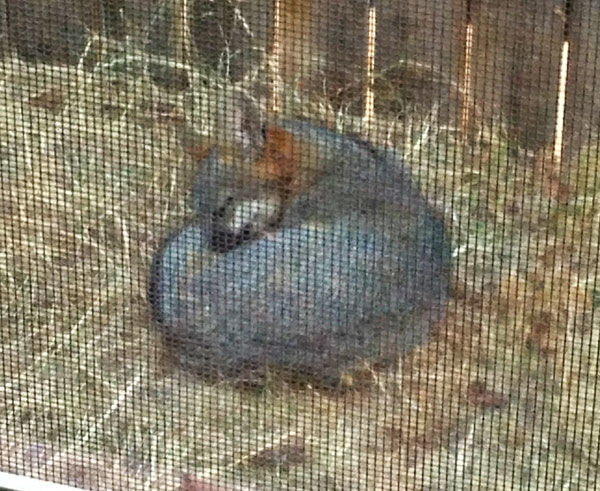 Foxes have always been a fixture around Midland, and not just on the outskirts of town, where we live. Some people fear them, but they don't pose any danger, other than minor rabies outbreaks, and those are no worse than your run-of-the-mill zombie attacks. We do have friends who claim that foxes were responsible for the hollowed out shells where their back yard turtles once lived, so there is that.
During the winter months (both of them), we move some of our more delicate plants into the garage for safekeeping. Each year, our garage gets a bit more crowded, and this winter's addition is the Mexican Lime Tree that normally resides on our back porch. I worried a little how it might react to the relative darkness and much cooler weather, even though it was protected from freezing. Well, my worries were apparently groundless: 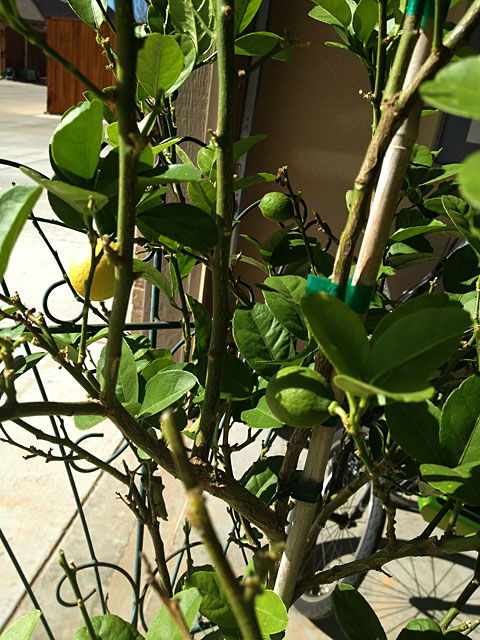 Can you spot the two limes in the middle? They weren't there when we moved the tree into the garage. (Ignore what looks like a lemon; that's what happens when you let your lime linger too long and fail to harvest it.) If you give the tree a weekly drink and roll it into the sunshine every now and then, it's perfectly content to be a garage-dweller.
I got into a spring cleaning mode last weekend and tidied up the attic and one of our closets. I made some tough decision about getting rid of some old friends, and this was simultaneously one of the easiest and toughest. 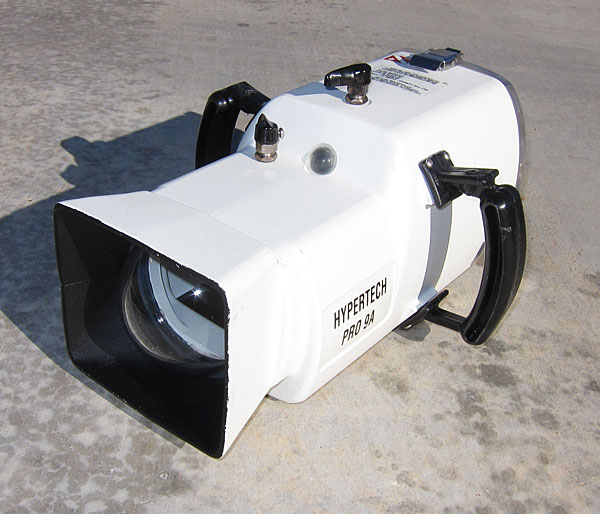 This is an underwater housing for a video camera. I purchased it in 1990 or thereabouts for a cool $1,000, back when we were doing a fair amount of scuba diving. It was a 19-pound one trick pony...the only camera it fit was Sony's CCD-V9 8-mm video camera (which was a real workhorse of a camera, but laughably huge and low-quality compared to today's units). It was a chore to lug around, especially through third world airports, and the controls were temperamental. I never really knew whether I'd managed to turn the camera on or not before getting back to the surface, and the battery life was such that you didn't dare turn it on before getting geared up and in the water.
Anyway, our video camera is long gone (I can't even recall what happened to it), and Sony stopped supporting the 8-mm tape format years ago. I racked my brain trying to think of some way to repurpose the housing; I even experimented with taping my iPhone just inside the lens, figuring that was a possible hipsterish steampunkish approach that might just be crazy enough to work. I'll try to post something separately about that experiment; the short story is that it didn't. I finally reached the sad conclusion that technology had rendered this apparatus obsolete, and into the dumpster it went. (If you have a brilliant idea on what I should have done with it instead, please keep it to yourself. Thanks.)
A Houston-based architectural designer (don't ask me how that's different than a plain old architect) has put her creative touches on an old adobe dance hall in Marfa, Texas, and turned it into an unusual home. If you know anything at all about Marfa, you'll know that "unusual" isn't that unusual, but this raises the bar for out-of-the-ordinariness, from a housing perspective.
The interior design is ultra-stark and ultra-hip (pardon the redundancy). While I wouldn't want it as a primary residence, it does scratch a creative urge in a pleasing manner. It has lots of open space - well, there are actually NO interior walls, just movable partitions to create an illusion of privacy - and some pretty funky accessories. But this scene from the "bedroom" really caught my eye. 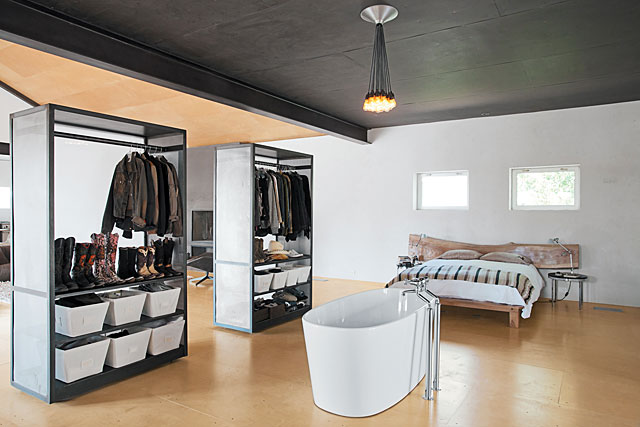 Yes, the bathtub just sits in the middle of the room (I didn't see a photo showing the location of the toilet; I assume we're not talking outhouse here), and those closets act as the rolling partitions I mentioned above. This house is obviously designed for someone who lives alone, or for a childless couple, or for anyone who grew up in a commune in the 60s.
Take a look at this slideshow for additional photos of this rather fascinating design.
Posted on January 26, 2013 1:29 PM | No Comments

Macro Mania is the next entry in this blog.