Dang, it's been awhile, hasn't it? You were probably thinking, "well, we'll probably see turtles fly before there's anything new on the Gazette." And you were right.

Thanks to Shana M for the tip; photo " borrowed" from Head Like an Orange
By the way, those little guys will keep coming over the edge until you make them stop, which can only be done by reading ahead until you scroll them off the screen. I know, I know; Nature can be a cruel mistress.
Speaking of nature, I got to visit the neighbors' fox earlier in the week. He was napping in their back yard, and was annoyed when we came outside to get a closer look. But he was also as curious about us as we were about him. Can you spot him in the following photo? 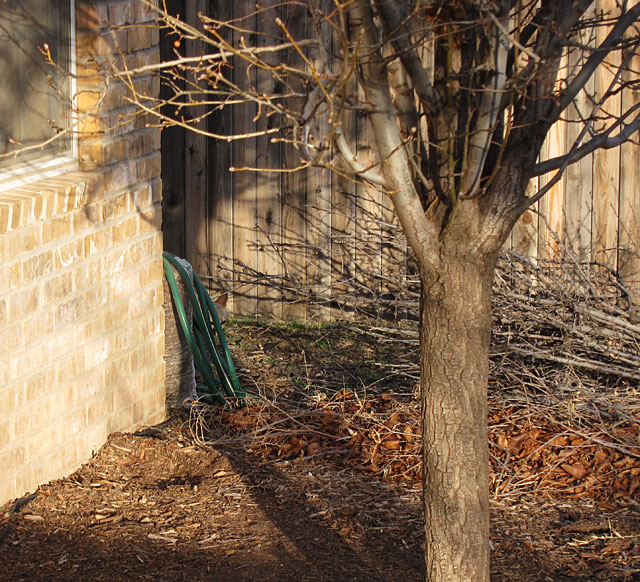 He's just a tiny thing, hardly bigger than a house cat.Our neighbors are content to let him hang around if he wants. [This is the sort of story that often ends, "...he seemed like such a quiet guy..."] But the problem is that the city's Animal Control, if summoned to address the situation, will just trap and kill him, and I understand their policy, given that foxes can carry rabies. In the meantime, he's a living nature lesson for the family (and for me, as well).
Speaking of lessons, what kind of study would be required to become a hairstyle archaeologist? I certainly don't have a clue, but Janet Stephens, a stylist in Baltimore, can answer that, because she's apparently become the world's leading authority on the hairdos of the ancient Romans and Greeks.
This is a great story on a number of levels. First, it challenges what I suspect are commonly-held stereotypes (sure, hairstylists should know about hair, but how many of them learn to read Latin in order to do so?).
Second, it's a classic example of following one's dream. Stephens embarked on her profession at the age of five (she's now fifty-something), and says in the article that "Whatever you're most passionate about when you're five is what you should do for the rest of your life." Of course, when I was five, I was mostly just eating paste in kindergarten, and while there's nothing wrong with that, I have yet to figure out how to turn it into a vocation.
Speaking of vocations, we're getting wonderfully close to the time when we can send our robot double to the office to handle all those pesky interpersonal interactions while our meaty selves are safely enrobed in our jammies, wielding a bowl of cereal and a TV remote. Cue the Double, which is actually just a Segue for your iPad.
It's a simple concept: mount a tablet on a pair of wheels that can be remotely controlled via another iPad (or iPhone or iPod touch) and WiFi or a cellular data plan, and use the iDevices' built-in cameras and microphones to show your mug on the remote screen and simulate actual conversation.
There are some intriguing applications, including using them for self-guided museum and gallery tours, but we're all secretly thinking the same thing: Mech-Warfare, albeit a very leisurely version, and without any weapons. OK, it would really be just like driving around an HEB parking lot, running into things in slow motion. Still, for $2,000 (plus the price of some iThings), you could probably watch as someone ran away with your investment.
Speaking of science fiction, here's an article about "science fiction investing," which - based on the results - is apparently what I've been doing for years, sans the science part. A big part of science fiction is scaring the living daylights out of you about what's just around the corner. Google's Project Glass fills that role perfectly; if you think you're connected today with your cell phone and computer, just wait until your eyelids will cue continuous interaction with everything Google thinks you need to know.
And speaking of things you need to know, you need to understand just how good a guitarist Brad Paisley is...good enough to hold his own with the legendary Joe Walsh. I recommend Paisley's 2012 book, Diary of a Player: How my musical heroes made a guitar man out of me for some insight as to what following your dreams entail (see also: hairdressers and Roman literature).

Note: This is a later version of the duet, as the original was in Flash format, and the Gazette
is a strict Flash-free zone. Sorry, but rules are rules.
Posted on February 8, 2013 10:46 PM | No Comments

Macro Mania was the previous entry in this blog.

Praising Parrot is the next entry in this blog.