I observed a couple of instances of unusual behavior on the part of some young animals this week, and they made me wonder about whether such behavior was learned or instinctive.
My drive to work each day takes me for a mile down a street called Mockingbird, the length of which on one side is mostly undeveloped pasture that belongs to Midland Country Club. A lot of wildlife comes out of that pasture and crosses the road, for reasons that perhaps only a chicken might be privy to.
On Wednesday, I observed a couple of young cottontail rabbits foraging side-by-side in the grass next to the curb on the side of the street across from the pasture. As I came upon them, they froze for an instant, then immediately bolted...in opposite directions, both away and toward me [despite what this biologist states with such British authority]. One had the poor judgment to bolt right in front of my truck (he fortunately managed to avoid getting squished); the other ran perpendicular to my line of travel, but away from me.
I can't recall seeing two rabbits bolt in that fashion before, but it made me wonder if the tactic of moving in opposite directions was an instinctual reaction designed to ensure that at worst only one of the pair would succumb to an attack by a predator. It seems highly unlikely that a single predator could bring down both bunnies even if they ran in the same direction, but it still raised the question of whether the maneuver was learned, instinctual, or just a random occurrence.
[It could be that rabbits are more noble than people, because everyone knows that the first rule of hiking in bear country is to make sure you can run faster than your partner.]
The second scenario played out on our front porch yesterday evening. We have a new brood of barn swallow hatchlings in the nest above the porch, and I was being my usual nosy, annoying self by standing and watching the little guys, who were just old enough to poke their beaks over the edge of the nest in anticipation that someone would drop something delicious into them. 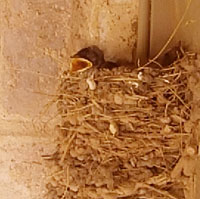 They took absolutely no note of my presence...unlike the parents. They returned from what I presume was a foraging expedition and took immediate umbrage at my presence, buzzing me like tiny fighter jets [I never have a badminton racket when I need one]. But here's the interesting thing: just before they began their strafing runs, they let out with loud chirps that sounded to my un-barn-swallow-like ears just like all the calls they make. But as I kept my eyes on the babies in the nest, at the first sound of the chirp, all the young ones ducked back into the nest and did not reappear, even though under normal circumstances the appearance of one of the parents would bring them up for feeding.
I have to think that chirp was simultaneously a warning to me, but also an alarm to the hatchlings. Again, I wondered whether they were hatched with the instinctive recognition of such warnings, or if there was some kind of learning curve involved.
I doubt that anyone has a definitive answer to these questions, although I did find this page with some insights about (and recordings of) the barn swallow calls and songs. If the website is to be believed, male barn swallows give out fake alarm calls if their mate seems to be getting frisky with another male (although in this case I'm pretty sure there's nothing fake about it), raising more questions about instinct vs. learned behavior.
I don't want to read too much into a couple of isolated incidents - we could just be dealing with aberrant, deviant, and/or typical youthfully rebellious behavior. But these questions add to the fun of observing the natural world around us.
Posted on August 9, 2013 11:06 PM | No Comments

Cruising the Interwebz was the previous entry in this blog.

Little Porch of Horrors is the next entry in this blog.