We had three pieces of "artwork" framed recently. You'll see why I've qualified the subject matter in just a minute.
Two of the pieces had been laying around the house for a couple of years, awaiting the time we worked an infinitely-expanding to-do list down to where they resided. They are both legitimate artwork, paintings by an internationally known painter and author named Charles Sovek. Charles was one of my earliest website clients, and he graciously presented me with a few of his paintings over the years. He died in 2007 but I've continued to work with his widow on a gratis basis as she handles the artwork now belonging to his estate.
The first piece is a small still life painting - I think it's an acrylic, and I know it's a bell pepper - which became measurably more impressive once it was framed. The photo below doesn't really do it justice. 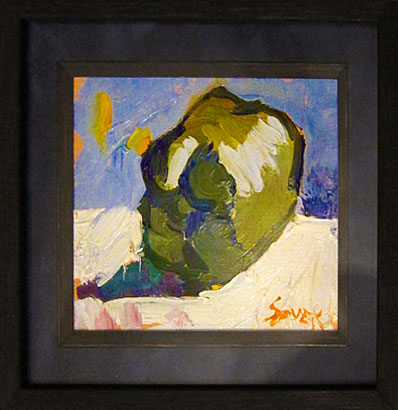 The second painting is an oil entitled Eagles Nest, Zion, from Sovek's Red Rock Country collection. This photo is another example of just how difficult it is for an amateur like me to photograph a beautifully-framed painting. 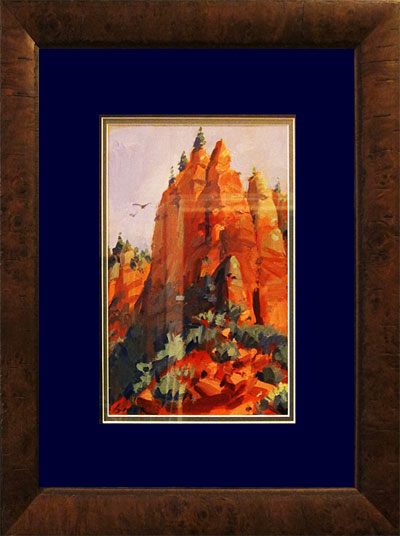 The third piece is my sentimental favorite, capturing a concept that I'd been kicking around in my mind for more than a year. Take a look at it, and then I'll give you the back story. 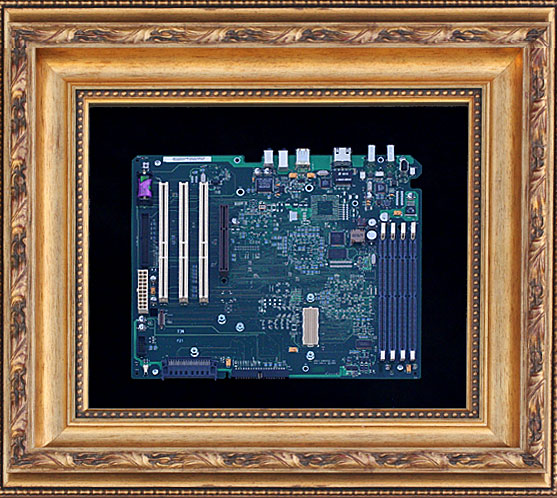 This is the motherboard from the Apple Power Mac G4 that I bought in 2001 and used daily for almost ten years. The circuit board truly is an industrial work of art (and even has the little battery - the pinkish blob in the upper left corner - that kept the clock going while the computer was powered off). I was enamored with the idea of showcasing a piece of high-tech equipment, where function trumps style in every aspect, in an ornate pseudo-baroque setting.
I love the way it turned out, and the framers apparently were thrilled with the challenge of bringing the concept to reality. One was a computer geek who once built computers; he said he debated about whether to leave the locking pins on the RAM slots open or closed (he settled on "closed"). He insisted on taking photos before letting me take the piece home.
Debbie has picked out spots for the paintings. The oil painting is hanging in our entry; the still life is going to Horseshoe Bay. But I haven't yet decided where to display the motherboard. I suppose our home office is the logical location, but I already have a cool watercolor map of the Caribbean hanging there. Hard decisions like this are what's known as "first world problems."
Posted on February 14, 2014 5:05 PM | No Comments

A [non-traditional] ballroom dance playlist was the previous entry in this blog.

Political endorsements by newspapers do serve a purpose is the next entry in this blog.