We recently returned from a vacation stay at Coronado, California (with an extended stopover at Las Vegas, but that's another story for another time). This was our fourth visit to Coronado, and we seem to be getting better with practice.
We stayed at the 1906 Lodge, a 17-room bed-and-breakfast named not for its address (which is actually 1060) but for the date of construction. It's a delightful place, within walking distance of just about everything on the island/peninsula/city (there's some confusion about how, exactly, we should refer to Coronado), yet far enough away from the main drag (Orange Avenue) that traffic noise is non-existent. 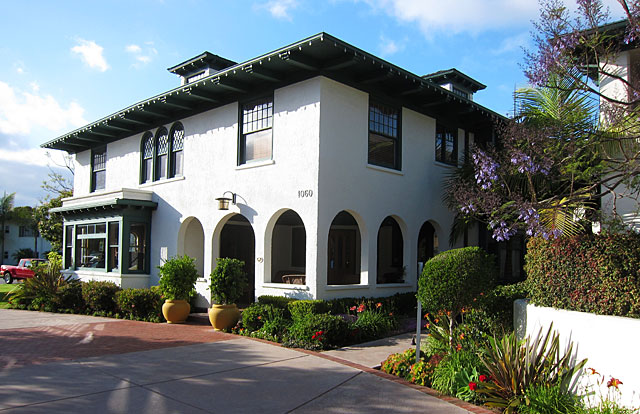 1906 Lodge
I'm planning on posting a more in-depth report of our stay (which I know you're dying to see, absent any accounts of oral surgeries done without anesthesia) but I wanted to start off with a video. On our last full day in/on Coronado, Debbie and I rented a tandem bicycle and toured the peninsula/city/island/whatever, and I recorded some of the afternoon on a GoPro camera attached to the handlebar. If you've never been to Coronado, you may not have a clear mental image of the beauty of the surroundings, and while the video doesn't necessarily do it justice, perhaps you'll get a feel of what we enjoyed every day of our stay. If nothing else, the Copland soundtrack might entertain and relax you. 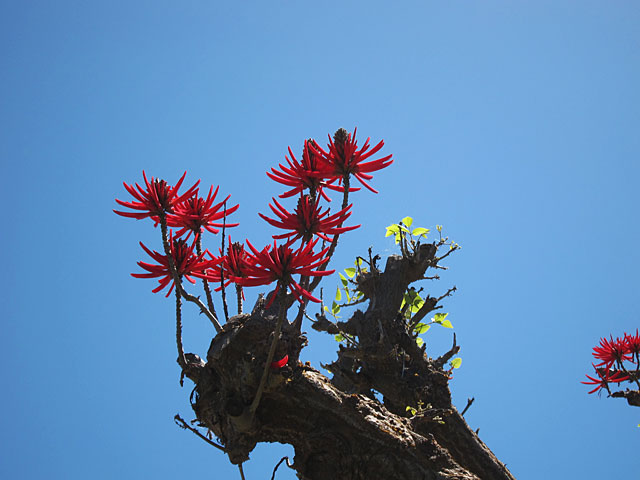 We have no idea what kind of tree this is.
Be the 1st to Comment

Preaching to the birds

Everyone who hears these words of Mine and does not act on them, will be like a foolish man who built his house on the sand. The rain fell, and the floods came, and the winds blew and slammed against that house; and it fell--and great was its fall.
Matthew 7:26-27 (NASB) 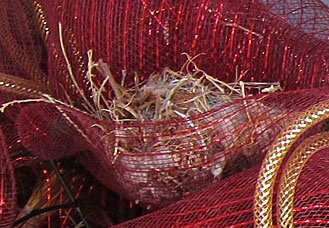 I suspect that most people who visit this blog are familiar with the preceding Bible verses, and their context, where Jesus warns against putting one's trust into things without a firm foundation. He was, of course, not giving a lecture in architecture or civil engineering, and His intent was to address spiritual issues more than the mundane, practical things of life. But...that's not to say that there are no practical implications to this parable.
It's also quite possible to apply this principle to non-human undertakings, and if you substitute "bird" for "man," and "front door wreath" for "sand," and "West Texas winds" for - well, the parable does hit that one on the head - the logical conclusion might be this sad scene, which greeted us this afternoon after work. 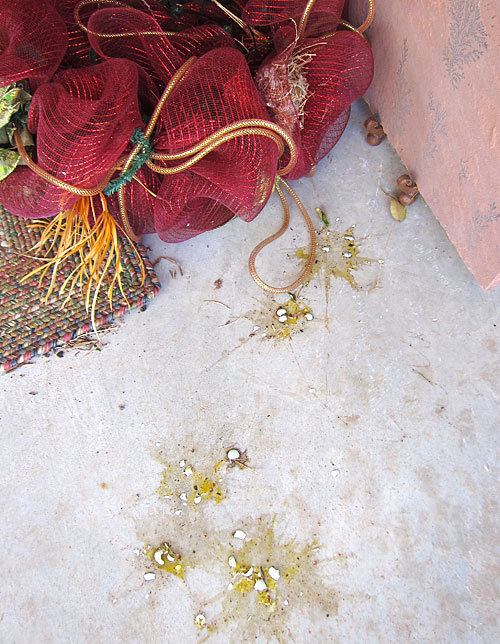 We had not even noticed the nest in the wreath until a couple of days ago, and I hadn't had a chance to see if there were eggs in yet (although I told Debbie that surely the birds hadn't yet laid any). But, judging by the carnage on the concrete, there were at least five, and possibly six eggs of unknown avian origin. Very sad, but...really birds? What were you thinking?
The nest is intact, and the wreath has been re-hung (and more securely), so we'll see if the parents were sufficiently traumatized that they'll give up on this location. But perhaps they'll try again. After all...Matthew 6:25-27.
Be the 1st to Comment

Rites (and blights) of spring

Spring has sprung (despite the temps in the 30s yesterday morning), as evidenced by the return of hummingbirds and barn swallows. The latter will apparently try to take up residence in the same nest they built on our front porch last year, provided they can run off the wren squatters - which, up until the swallows showed up, had no interest whatsoever in said nest, proving that birds are people, too.
The advent of spring, along with our best guess as to when the last freeze has occurred, also precipitates the annual ritual of the Torturing of The Sheltered Potted Plants. This takes place every year (hence the "annual," in case you were distracted by baby squirrels), and involves trundling out of the garage and onto the driveway the bougainvillea and other semi-tropical plants that we've nurtured through the winter. They somehow sense the change in season and begin to put on lush, pale green foliage even in the relatively dim light of the garage.
This, of course, is a display of bad judgment on their part, because they seem to forget what it's like to be thrust back into the brutal West Texas outdoor climate. And so we repeat the sad spectacle that's shown below. I'll let you try to guess which is the "before" and which is...well, you know. 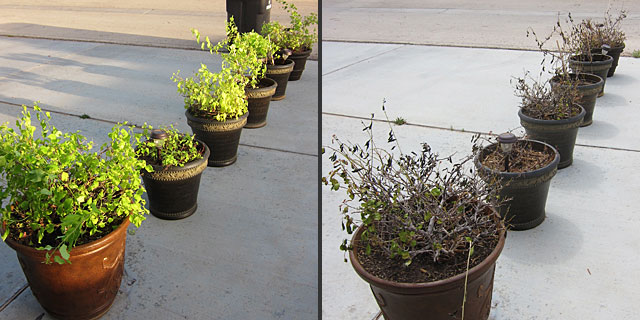 Incidentally, these photos were taken six days apart, but it took only about a day of 85º weather to turn the plants on the left into what you see on the right.
Fortunately for all involved, bougainvillea are pretty hardy and within a couple of weeks will be back in summer shape, until the cycle begins again next November.
Be the 1st to Comment

Ode to a Bulb

I subscribe to a small number of retail email lists that notify me of "special deals" on items that are of general interest to me...primarily electronics and some sporting goods. I rarely end up ordering anything via those e-flyers, but the one exception is Best Buy's "Deal of the Day" email. I've gotten some really good savings on things like memory cards and flash drives; these items pop up on the email frequently. And now I have another product that I'll be watching for: light bulbs.
The primary lighting source in our home is 65-watt equivalent indoor flood lamps in recessed ceiling fixtures (aka canned lights). I've never counted them but I'm guessing we have about thirty, and that adds up to a pretty significant investment in light bulbs. Our current bulb of choice is that evil incandescent model that haunts Al Gore's nightmares.
I've never been enamored with CFL bulbs. I gave the swirlies a whirl in our previous house and didn't see any greater life in those bulbs as compared to incandescents, and found the non-instant-on feature quite annoying. I'm all in favor of saving energy, but just can't see the devil in incandescent bulbs that everyone claims is lurking there.
I would, however, be quite open to trying an LED bulb, even though the strings of LED Christmas lights we used in the past were ridiculously wimpy. So, when Best Buy advertised these LED indoor floods for half price, I was intrigued. I put an order in for three of them, and have been using a couple in our home office for about a week. I'm very happy with the result. 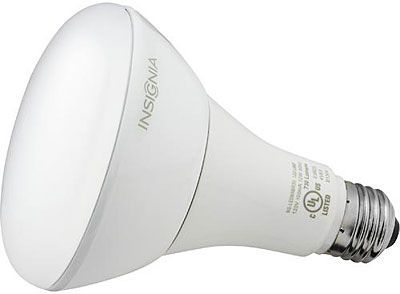 Even though the bulbs are slightly smaller than the ones they replaced, they're actually brighter, and they put out almost no heat, which will be a blessing when (if?) we get into serious summer. I have no idea if their lifespan will come close to the ridiculous-sounding claim on the box, but even if it's only half as good, it will still be better than the incandescents.
At a couple of sawbucks per bulb, I'm not anxious to undertake a wide scale replacement of all our bulbs, but at half that price, it begins to make more sense. So, I'm going to keep an eye out for future deals in the daily email, and see if the bulbs will actually make a noticeable dent in our electric bills.
1 Comment

We interrupt this hiatus for some important scavenger footage

I noticed this evening that someone had added my Twitter account to a group called "Bloggers in TX." That poor misguided soul had apparently not noticed the infrequency with which actual blogging-like activity occurs around here, but now I feel obligated to live up to his expectations. So, here're some buzzards.

Capistrano has its swallows; Fort Stockton has its avian garbage disposals.
Be the 1st to Comment
« March 2014 | Main Index | Archives | May 2014 »
Search the Gazette:

This page is an archive of entries from April 2014 listed from newest to oldest.

March 2014 is the previous archive.