Snooping on the birds and the bees

The barn swallow nest on our front porch that provided some video footage last summer is once again occupied. However, I haven't noticed the presence of baby birds, and my curiosity got the better of me this afternoon. I mounted my GoPro on an extendable monopod, connected it via wifi to my iPad so I could monitor the footage, and did some detective work. Here's what I found:
I've never seen this before. Is it unusual for baby birds to share a nest with unhatched - but viable - eggs? I hate to be pessimistic, but I'm afraid two two eggs are not going to hatch...seems like they should have by now. I'll let you know if and when anything changes.
While I was out, I noticed an interesting insect crawling on the lone black-eyed susan bloom, so I swapped the GoPro for my macro-lensed DSLR. 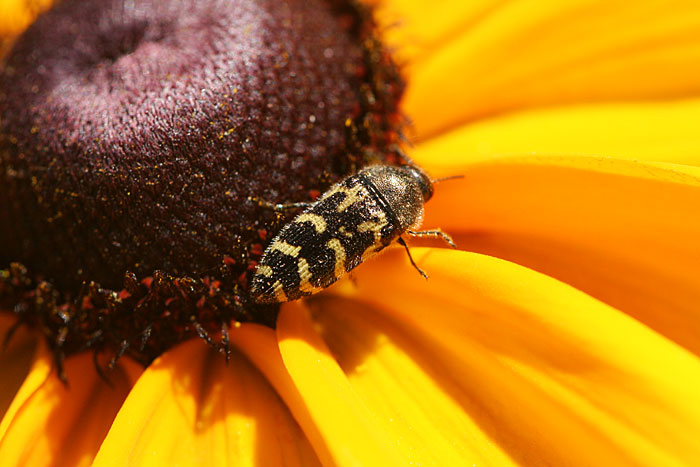 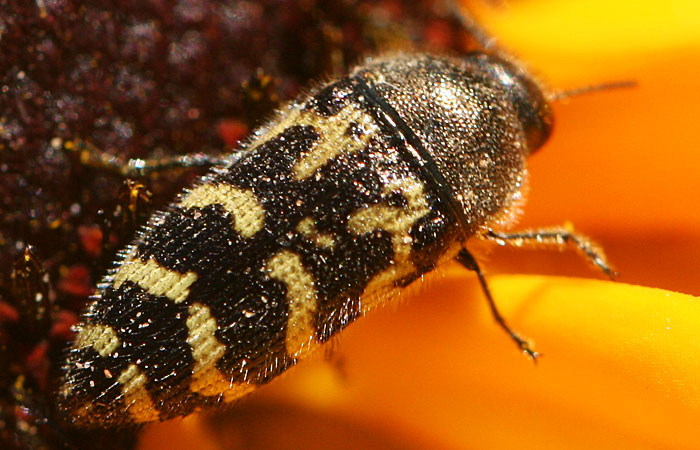 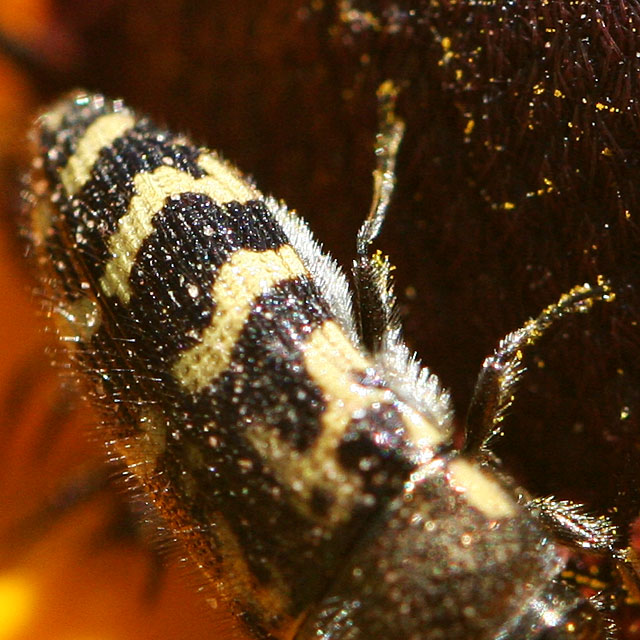 I couldn't i.d. the insect. It flew away, and the presence of wings under the carapace seems to indicate that it's a beetle of some kind (we've touched on the bug-vs-beetle distinction in these pages), but I couldn't find anything close to a matching photo despite extensive research (which, for me, means 3 1/2 minutes looking at Googled images). If you have an idea, feel free to share it. Anyway, from a distance it wasn't too impressive, but up close, the sparkling carapace and delicate hairs glistening in the sunlight were a revelation.
4 Comments

First trail run of the season...or "Death in the Desert"

Most of Texas was blessed last week with some of the best rainfall we've had in months, and lake levels across the state reflected the results of that bounteous precipitation. However, one lake that didn't get much benefit was Lake Travis, outside of Austin, as you can tell in the photo below. 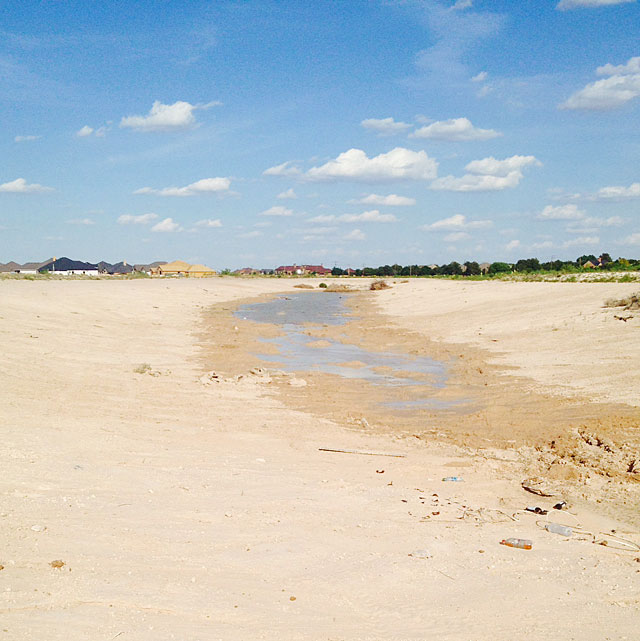 Sad, isn't it? OK, just kidding*.That's actually what's left of the standing water in a ditch (of unknown origin and purpose) just south of our neighborhood. On those rare occasions when we get enough rain, this ditch becomes a magnet for pickup trucks driven by teenagers (or full grown men who wish they were teenagers) to go mudding.
I took the photo this afternoon during a run through the pastures surrounding our neighborhood. We normally have a dance class on Thursday nights, but our teacher canceled on us - I think she can take only so much of our ineptitude - and so I had an unexpected opportunity for a workout. It was the first time I'd been out on the trails, and I figured I should give it a try before it got too hot (today's temps were in the upper 80s).
Running on trails is more entertaining than running in the street. I have to focus more on the terrain and foot placement (as well as being attuned to the possibility of rattlesnakes), and thus I don't dwell quite as much on how miserably out of running shape I am. It did occur to me, however, that trail running is sort of like riding a conventional road bike in that you spend most of your time staring at what's immediately in front of you instead of taking in all the surrounding scenery (as we can do on our recumbent bike).
Anyway, I also think that running on dirt is easier on my aging (aged?) legs and feet, and navigating the varying terrain is also good for my balance. All of these benefits are somewhat offset by the continuous feeling that I'm going to keel over and die at any moment due to the effects of unfamiliar exertion, but, hey...life is a risk, right?
Seriously, no matter how many cycling miles you get, no matter how many hours you spend on the elliptical, no matter how much iron you pump...the only way you get into running shape is to either go back in time forty years, or, you know, run. The former approach is desirable but unfortunately just out of reach, and the latter takes time and energy.
Nevertheless, it was a good run, if depressingly slow. But I'm at the point where it really doesn't bother me to record 9:30 miles, especially if I can rationalize them by pointing out that trail running is inherently slower than street running. Plus, as I said before, this was like a free workout so it's all good. Now, we'll see if I'm singing that tune in the morning when I fall out of bed.
I didn't spot a lot of wildlife - a few Texas spotted whiptails, a couple of cottontails and one jackrabbit, several pairs of quail, and zero rattlers. Barn swallows were swooping over the ditch water shown above, and I heard a few mockingbirds making fun of my running style. I also thought I caught a whiff of skunk at one point, but it was later in the run so it was probably just me.
By the way, for the benefit of any local runners who might come across this, here's a map of the route around Woodland Park; it's a little less than four miles.

Those zig-zags are simply mileage extenders...some dirt roads going in and out of the undeveloped part of the neighborhood.
If you think you'd like to try off-road running, I recommend getting some use-specific shoes. I really like my New Balance 910s - dumb name but great shoe. They're stable, work well with my orthotics, and I never have to worry about trapping gravel in the treads that could scratch our hardwood floor. They look like a kid threw up eight flavors of cotton candy on them, but I can live with that.
*Well, actually, that photo isn't all that far from reality for Lake Travis.
Be the 1st to Comment

Most people I know don't understand how Twitter works or see its value, but I find it to be the most interesting and useful of all the social media choices, at least in terms of finding bloggable gems. The secret is to follow the right people: interesting, intelligent folks with specific expertise in subjects that interest you. Once you find those people, they'll can surprise and delight you with ideas and links you probably wouldn't have discovered on your own. Here are a handful of examples I've collected recently.

Julie is a writer and blogger and has a love/hate relationship with social media. When she links to a writing site, it's worth checking out. So, I dropped in and was motivated to submit an entry. I'm pretty sure that by sharing it here, I'm disqualifying it from being published over there, but the chances of the latter are slim-to-none, so here's what I sent:
The software keyboard was awkward at best; Siri was useless. When, he wondered, would someone finally make a decent input device for a dog?
Update: Just for the record, Nanoism does send rejection letters. *sniff*

Rebecca Onion is a blogger in the Slate Empire, specifically at the Slate Vault, a sub-pub that focuses on history. She writes some epic stuff. But not everything on Twitter has to be epic.

How much did Photigy do to that amazing iPhone vs Hasselblad photo in post?: http://t.co/mtSq2b7tZt

Even if you don't follow them on Twitter, the folks at PetaPixel provide some of the widest-ranging and interesting photography-related resources on the web. This tweet links to video and text explaining how a professional used an iPhone and Photoshop to replicate the results of a multi-thousand-dollar camera.

More from Rebecca Onion, this time a link to a new, improved axe, an invention the world has long cried out for. Some tweets are, indeed, epic.

We don't always eat carryout pizza, but when we do, we order it online from Domino's. In this tweet from TechCrunch, an aggregator of all things, well, techie, we learn about a potentially life-changing new app from the pizza dudes. Never again should you dismiss Twitter as being trivial.

A wetsuit design that stops sharks from eating swimmers (why it works is fascinating): http://t.co/JsJyfjicG6 pic.twitter.com/IUuCBdbMtZ

TED, for those who have been living under a rock without wifi, produces videos of short talks on a wide variety of subjects (the organization's name reflects its original focus on technology, education, and design), like the one above in which we find that sharks won't eat you if you look like a zebra. Or something. Please feel free to test this theory and let us know how it works for you. Anyone?

Under LED lights, your clothes can't get "whiter-than-white" http://t.co/QyZLgTCR2l

Now, this is fascinating. Alert Gazette readers may recall this recent post about LED lighting for the home. As it turns out, it's not all sweetness and light (*ahem*) for LED switchers, because your tidy-whities might not be, after all. But at least you'll have a scientific explanation.

What is that rainy day smell? ▸ pic.twitter.com/tm1cCd6nxA

And speaking of scientific explanations, who hasn't reveled in and then wondered about the source of that amazing scent that comes after a downpour? (Other than those of us in drought-stricken Texas who have never experienced that mythical phenomenon known as "rain.") As it turns out, it's just bacteria poop, along with some other stuff. Way to ruin the romance, Jeff. (He's a science fiction writer, and a pretty funny guy.)
Be the 1st to Comment
« April 2014 | Main Index | Archives | June 2014 »
Search the Gazette:

This page is an archive of entries from May 2014 listed from newest to oldest.

April 2014 is the previous archive.