I recently took possession of a 1960s-vintage 12 gauge single-shot shotgun, formerly owned by my father-in-law, who says the gun was shot only a few times. This was partly because the unchoked barrel made the gun pretty uncomfortable to shoot, but he also wasn't a hunter. So, the gun has been rusting away in a closet for decades. 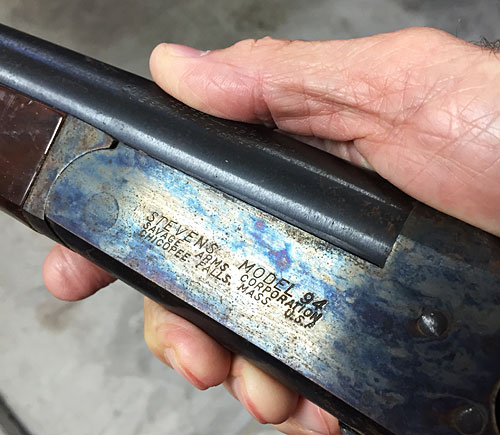 It's a Stevens Model 94 manufactured by the Savage Arms Corporation. According to this article, Savage turned out more than a million of these shotguns, starting in the 19th century, in a variety of gauges. They were inexpensive, and by the time this particular model came into being, "inexpensive" was an acceptable synonym for "cheap." What looks like a nice walnut stock is actually grade-A genuine plastic. These shotguns generally sell for around $100-$150 dollars in the aftermarket. 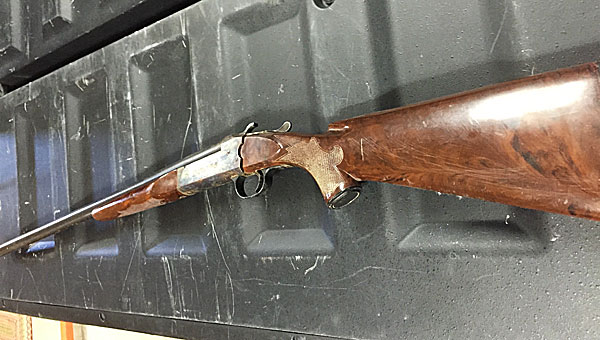 I've cleaned the gun a bit, although as you can tell by the first photo, it's still rusty. Somewhere along the line the bolt that tightens the stock loosened, and I can't tighten it so there's a wiggly gap (that's a highly technical gunsmithing term, I'm sure). In short, this shotgun is no longer destined for shooting. So, I've removed the firing pin, and I want to "repurpose" the gun.
Here's where you come in, oh gentle and creative Gazetteer. I need your ideas for turning this gun into yard art, either as a standalone piece or something that will hang on a brick wall. I could always just mount it as is and stick a flower in the muzzle, but that's awfully cliched (although perhaps age-appropriate for a hippies-vintage gun) and I'm sure you guys can come up with something better. The only caveat is that it has to be something that I can actually do...so try to think like a third-grader.
And, seeing as how today marks the 12th anniversary of the Fire Ant Gazette, I figured we should make this a little more special than usual, so if you have the "winning" idea, I'll immortalize you on these pages as a character in a short story. (Eventually.)
So, if you can think of some creative uses for a shotgun that has a little sentimental value, but none otherwise, please share them via email or on the Facebook post that links to this page. Thanks in advance, and may the blast be with you.
Posted on November 8, 2014 10:42 AM

"Dread Champion" was the previous entry in this blog.

Winter is Coming is the next entry in this blog.