My latest DIY project was pretty simple but still intimidating as it involved drilling holes in our custom built-in cabinetry. As my pal Gene and I discussed over breakfast this morning, you can't uncut lumber or undrill holes (well, I can't), so measuring twice was just a starting point for me.
Here's one of the unsullied drawers into which I wanted to install a keyed lock: 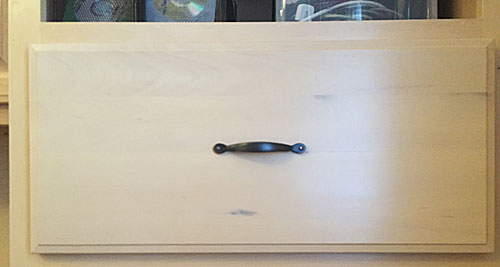 And here are the components of the "simple" cylinder lock, which is a 1 3/4" lock in Antique Brass finish to match the drawer pulls: 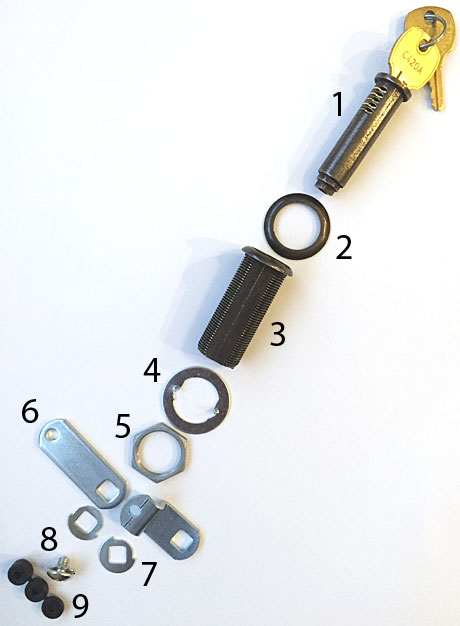 Thirteen pieces to deal with, and no instructions came with the locks. However, the website for the seller, Rockler, did provide a link to a PDF entitled "Technical Data" which did give some crucial measurements for placement of the hole and some subtle suggestions for installation. In addition, the plastic bag in which the lock was shipped had another link to the manufacturer's instructions, although they also were sadly lacking in detailed explanations of how all the parts should be assembled. But, between the two documents and my own keen intellect, I was confident that I could figure it out, and if I couldn't, I'd just superglue the lock plate over the hole I drilled and no one would be the wiser.
After measuring about a half dozen times, I marked the center point of the hole with a punch and began drilling a 3/4" hole. I used a Porter Cable Forstner bit, partly because it drills a really clean hole, but mainly because it's expensive and I rarely get to use it.
I also discovered that alder wood is very slow drilling. The experts say it's one of the softest hardwoods, but if that's the case, I hate to drilling many holes in the hardest variety. In any event, the hole was drilled: 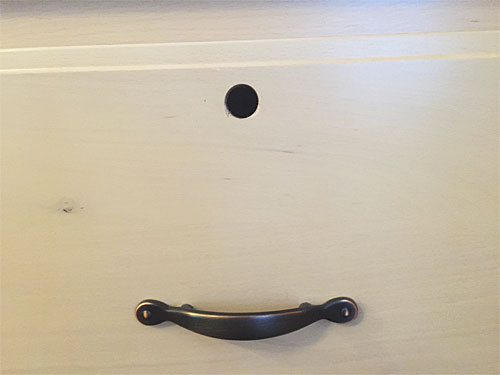 The first installation step was to slip the trim washer (#2 in the first photo above) over the cylinder tube (#3) and insert the tube into the hole, like so: 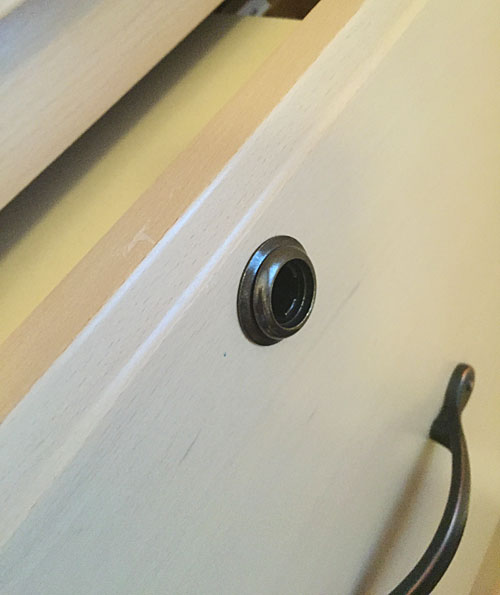 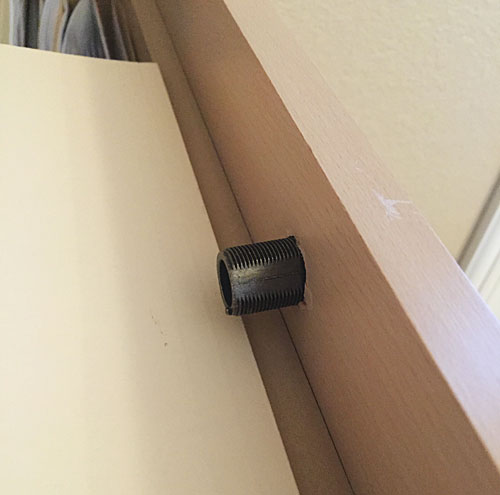 The next step was to insert the lock cylinder (#1) into the tube (leaving the key in it to stabilize it), and then slide the spur washer (#4) over the cylinder tube and tighten it firmly against the back of the drawer with the hex lock nut (#5). Use the key to hold the cylinder in place while you tighten the lock nut. The teeth of the spur washer bite into the wood and ensure a tight, unmoving fit. 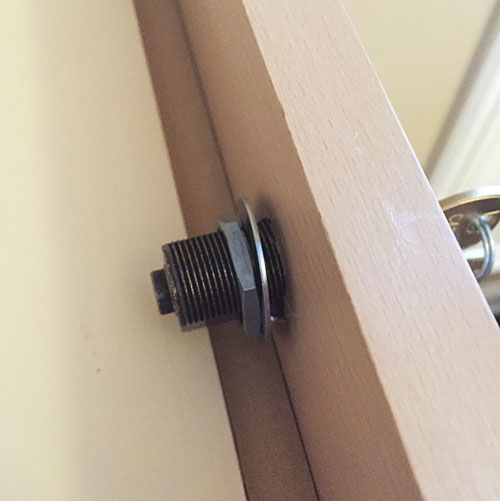 This is where is got a bit tricky, as ideally you'd have three hands to accomplish the next steps. I was lacking both a hand and any logical concept of what I was doing.
Part #7 are two types of stop washers, one of which allows the locking mechanism to turn 90º and the other allows it to turn 180º. Frankly, I couldn't figure out an application for the latter, but I'm sure there's a reason it's included. I chose the 90º version, which is the one on the right in the photo of the components. It slides over the end of the cylinder and must be positioned just so in order to allow the cam (#6) to rotate to the proper position (locked vs. unlocked).
You'll note that there are also two choices of cam, one for cabinets or drawers that overlap, and the other for those that close flush. Our drawers overlap, so I used the longer, flat cam.
Once the stop washer and cam are in place, they are secured with the machine screw (#8). Again, it's important to use the key in the cylinder to hold things in the right position, but that means it's also very easy for the cam and/or stop washer to slide out of place while attempting to tighten the machine screw. I gave my mental vocabulary a workout while getting this done. But here's the final result; the top photo is the unlocked position and the locked position is in the next photo. 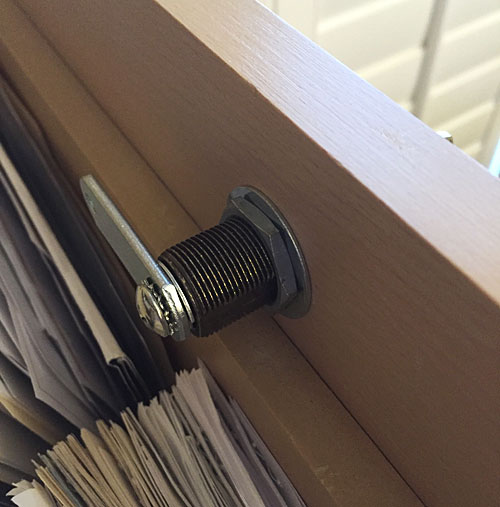 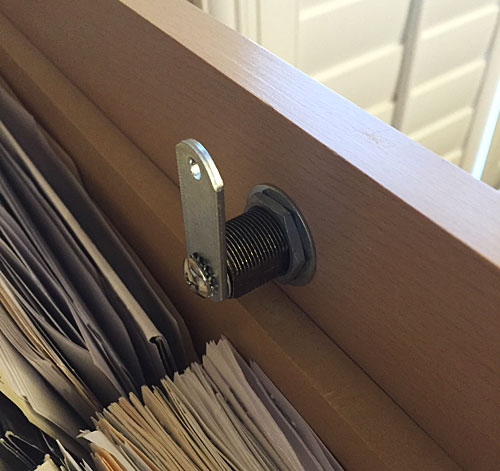 As you can tell, I didn't bother emptying the drawer before I installed the lock. I did put masking tape over the back of where the hole was drilled to minimize splintering, and inserted a manila folder over the files to catch any sawdust, but it turned out to be a pretty clean process...on that side, anyway. Forstner bits generate a lot of sawdust, though.
MLB and I were quite happy with the final installation. The lock mechanism was a perfect fit (but there are some spacers [#9] that can be inserted in the hole in the cam to ensure a tight fit if the thickness of the drawer or cabinet is slightly less), and the lock feels very secure. I definitely recommend this application for everything from childproofing to securing personal documents and/or office equipment from "thefts of convenience" (obviously, they won't stop a determined burglar). In addition, you can get the locks keyed either individually or alike, depending on the level of convenience you want. 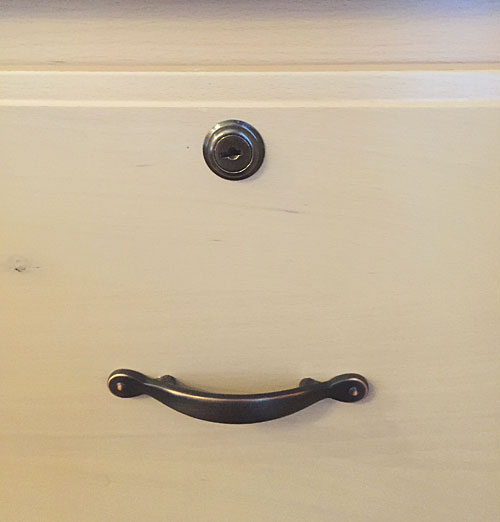 Footnote: Lest I ruin my well-deserved reputation as a DIY Disaster, I did end up with an uh-oh in the final installation. But I'm not going to tell you about it or even show it, because some things are better left as mysteries.
Be the 1st to Comment

I spent a couple of hours last weekend removing a dead palm tree from our front yard. Well, I should qualify that: I achieved partial removal, but I still consider that a victory.
When we landscaped our new house eight years ago, we asked the contractor to plant a specific type of palm. In his great arrogance wisdom, he planted a different species (the identity of which we can't remember) without telling us. We actually had no complaint for six years, as the tree seemed to flourish. 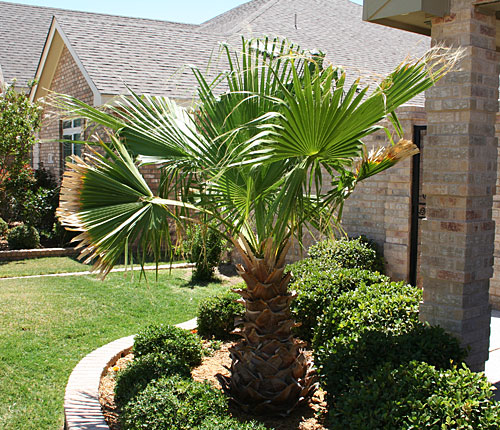 Our tree in a happier time
But the overly harsh winter two years ago was its undoing. We had hope, without any accompanying optimism, that it would somehow recover, but we finally accepted the reality that not only was it no longer alive, it had no zombie prospects. 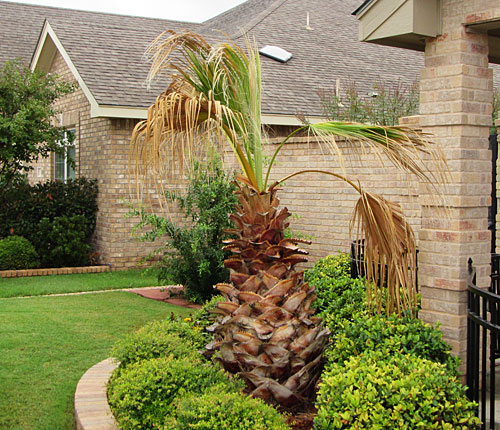 Can't quite put my finger on it, but something seems amiss
The remaining tree trunk wasn't massive, but it also wasn't something I could make short work of with a sharpshooter shovel and a chainsaw. Have you ever tried to disassemble a palm tree? It consists of a seemingly infinite number of layers, each of which is progressively weirder in composition. The outer layer (of this species) consists of the "bark" which is basically bullet-proof and lined with hooked teeth that are the envy of Great White sharks. Beneath this bark are thin layers of fibrous material so dense and tear-resistant that early Polynesian cultures used them to fashion unassailable chastity belts for their virgin daughters. OK, I made that up, except for the unassailable part. There's no way a saw can effectively cut through those fiber layers without becoming a tangled mess.
Given these anatomical challenges, I devised a cautious plan that I hoped would allow me to deconstruct the tree bit by bit. I first cut the roots using the aforementioned sharpshooter. I had no idea how deep the root system extended (I still don't, but we'll get to that later), but a key part of my plan was the ability to tip the trunk onto the ground and work on it there.
This step proved to be easier than expected. After digging around the base of the tree, cutting through the less-than-extensive lateral roots, I wanted to push or pull the trunk over. I thought about wrapping a chain around it and using the truck to tip it, but after a few tentative shoves by hand, the trunk actually snapped off at ground level, having apparently rotted over the past two years of dormancy (aka, death). 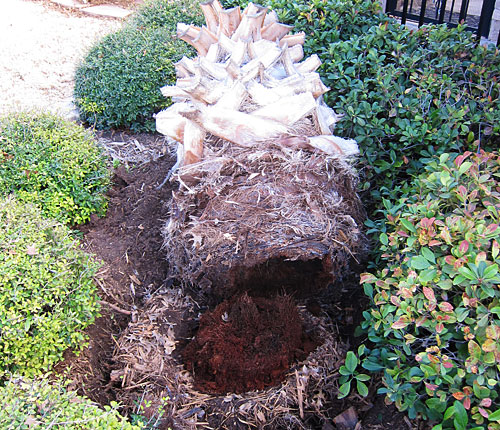 Oh, snap!
With the trunk lying prone, I proceeded with my Plan of Dismantlement. Pro tip: It's much easier to take a palm apart from the base up, rather than from the top down. As long as I respected the natural order of the layers - and wore thick leather gloves - I was able to easily strip off the deadly "bark" (I'm sporting just a single Band-Aid as evidence of the wisdom of my approach). 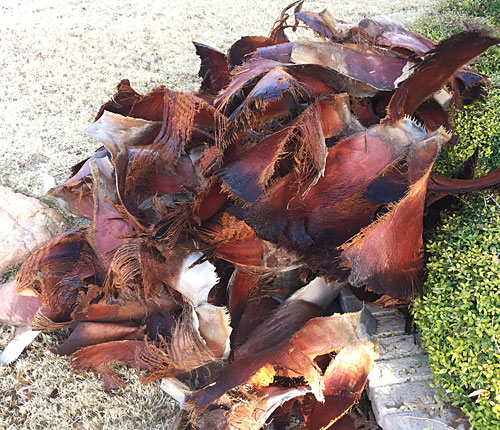 The term "fronds" is much too...sissified...for these vicious objects
I was then left with a bare trunk to dispose of, one that I estimate weighed 150 pounds or so...more than I could gracefully load into a wheelbarrow or truck bed. So, how to break it into manageable pieces, given its resistance to sawing? I could envision only one solution, and it involved brute force. 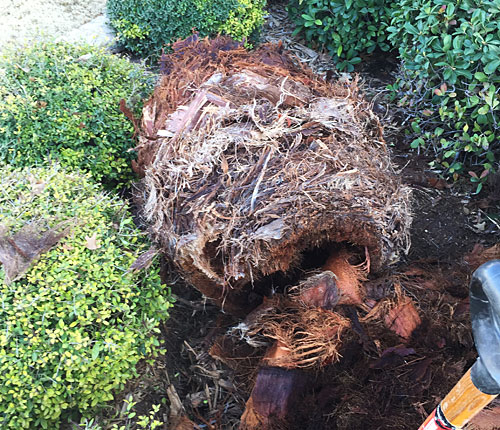 Bare naked palm
I dug a pickaxe out of the tool chest and set about channeling my inner John Henry. Yeah, I know; he swung a sledgehammer, but work with me here.
I didn't know what to expect, and the first swing of the pick wasn't very satisfying as the tool just sunk into the trunk without causing any discernible useful destruction. But after a few more powerful (in my mind, anyway) swings, I sensed some progress. Then, just like that, the trunk began to disintegrate into twenty pound chunks. Again, I suspect that was due to the rot that had set in. It took little time and effort to break the remaining trunk into those manageable pieces.
All I'm left with now is the root ball, still securely sunk in the dirt. I plan to use a shovel to cut under it, but that work is somewhat complicated by not knowing exactly where the sprinkler lines run. The last thing I want to do is cut a pipe. Well, the absolute last thing I want to do is cut my toes off, but I'm pretty sure I can avoid that. I also fear that the muddy root ball may weigh as much or more than the trunk itself, so getting it out of the hole and fragmented for disposal will be another challenge. I suspect there's more pick swinging in my future. 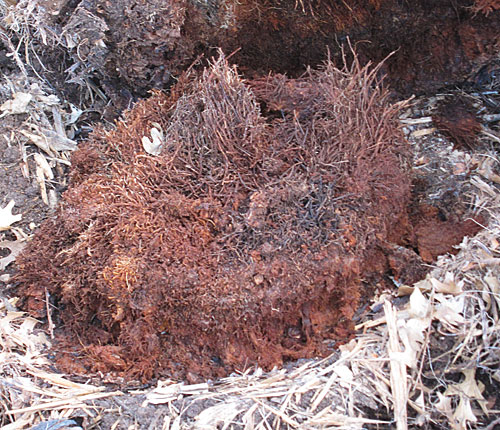 The final challenge
Stay tuned for the next exciting bevy of botanical bashing!
Be the 1st to Comment
« January 2016 | Main Index | Archives | March 2016 »
Search the Gazette:

This page is an archive of entries from February 2016 listed from newest to oldest.

January 2016 is the previous archive.