Ten Cover Songs Worth Checking Out

One measure of the success of a song is the number of cover versions it spawns. A great example is the multi-Grammy-winning Uptown Funk. I didn't bother getting an exact count, but the iTunes Store shows page after page of remakes (including inexplicable ukulele and violin renditions, and multiple acapella arrangements by college groups) of the song that's only about eighteen months old.
In every instance, the covers of Uptown Funk are inferior (in my opinion) to the original, but that's not always true. Although purists might rightfully disagree, I find that remakes of older pop and rock songs are often better than the originals, or at least successful in reinvigorating tunes that have grown tiresome through repetition. In some cases, it's because of superior talent by the new artist; in others, modern production techniques (or changing tastes) give the cover an edge.
Here's a list of ten very recognizable songs that I think have benefitted by new treatment. Not every one is necessarily an improvement, but they all breathe new life into the original.
(Note: I was almost through with this post before I discovered the amazing SecondHandSongs website, which is to cover songs what IMDB is to movies. I could have saved a lot of time had I known about it sooner.)
Eleanor Rigby by Joshua Bell & Frankie Moreno (original - The Beatles): Joshua Bell is likely a familiar name, but Frankie Moreno (not to be confused with Frank Marino, a female impersonator) is probably less so. Moreno was the house act at the Stratosphere Hotel in Las Vegas for a few years; he's now a touring musician and a staple in venues around Vegas and is one of the most dynamic performers working today. He and Bell team up to enhance the already classical vibes (the original arrangement takes its cue from Vivaldi) of one of the Beatles' most well-known ballads.
Bonus! The Sound of Silence by Disturbed (original - Simon & Garfunkle): I'm late to the party on this one, as I just discovered this version. Sure, it was recorded last year, but the video below has more than 20 million views, so unless some of you are serious Disturbed fans, a lot of folks know about this version. Whether they recognize that the song title isn't exactly the same as the 1964 original is probably another question, albeit completely irrelevant.

Anyway, this choice deserves a bit more explanation, because it has a really interesting back story. Disturbed is a metal band - not usually my musical cup of tea - and the lead singer, David Draiman, looks and sounds the part, because stereotypes. What I did not know is that he's Jewish and was for a time in training as a hazan or cantor (a director of liturgical prayer, chants, and songs in a synagogue). In a musical genre that often attracts neo-Nazi skinheads, he's aggressively pro-Israel and won't back down when confronted with anti-Semitism.
Draiman's raw, bordering-on-imperfect voice brings a growling, angst-filled vibe to S&G's classic that is frankly mesmerizing.
Be the 1st to Comment

My brilliant, funny (and much younger) cousin Wendy does a weekly Facebook post in which she reviews a song - usually after having a glass of wine - that's meaningful to her in some way at that specific moment. I'd point you to the posts but they're only for her friends and she doesn't know you that well. (I have threatened to repost her articles on these pages, since she refuses to blog them, due to some excuse having to do with raising three young sons or some such nonsense.) Anyway, I'm inspired by her to start doing some more music blogging, and I'm starting south of the border.
I've always had a fondness for Latin-flavored music, but it's been intensified over the past decade during which MLB and I started dancing. The Latin dances - primarily cha cha and rumba, but also samba and salsa (although we're not very good at them) are our favorite ballroom steps, and so we have a corresponding attraction to the music.
So, the following are the ten songs I'd take with me to a desert island with a dance floor located off the coast of Mexico (or somewhere in the Caribbean; my net casts pretty wide), in no particular order.
Be the 1st to Comment

I hate to alarm you, but we have a packaging crisis in the United States. As in...too much of it. This became obvious yesterday upon the arrival of two items we had ordered.
Exhibit A is a dress that MLB purchased from the website of a well-known clothier. Here's the box in which it was shipped (I included her to give you a sense of scale): 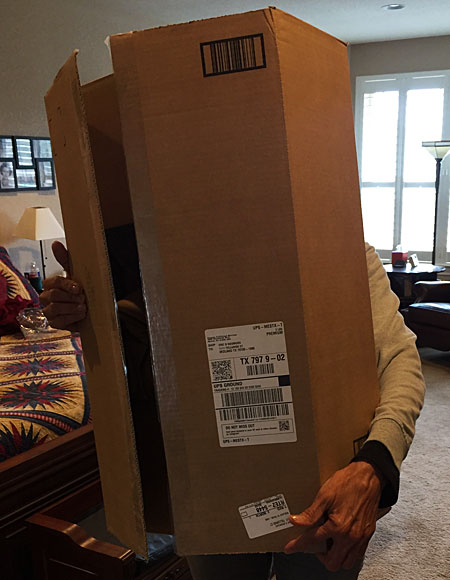 Now, I could understand this kind of packaging if she had ordered, say, a suit of medieval armor, or if she starred in a reality show on Spike TV entitled Gargantuan and Sexy, but in truth it was a little filmy dance dress, and she qualifies for only part of that imaginary TV series. Anyway, I have no idea what the shipper was thinking. Perhaps they had run short of dress-sized boxes. Perhaps they were simply responding to a perceived "bigger = more valuable" philosophy that accompanies our tendency to super-size our consumption. Or, more likely, the guy in the shipping department just grabbed the closest box.
Exhibit B came in the form of a Nutribullet (I know; that's a topic for another discussion) that we ordered from Wal-Mart. Here's how the less-than-two-feet-tall device was packaged: 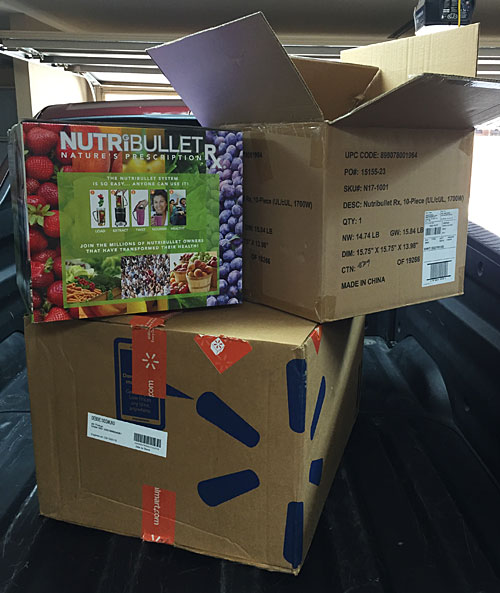 In this case, the shipping department employee was either a big fan of matryoshka dolls, or really into recursion. Or, we should not completely discount that he was influenced by a recent meal of turducken. Anyway, while Nutribullet is obviously proud of its product (as evidenced by what they charge for it), packaging it more securely than a shipment of weapons-grade plutonium seems a bit excessive.
And speaking of excessive, after she unpacked the boxes, MLB spoke of the largest box being "filled with intestines." I was simultaneously intrigued and repulsed, but here's what she was referring to: 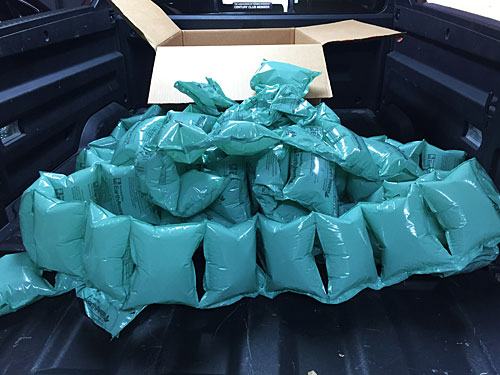 I admit to being impressed that someone was actually able to get anything else into the Master Box™ along with that air-filled serpent. I was less impressed with the effort it took to deflate each one of those little pillows so I could get them into a trash can. It was much less satisfying than bubble wrap.
Boxing Day is a big deal in Canada; perhaps the US needs to start observing an Unboxing Day.
Note: I put this post into the "Design" category, because packaging engineering is a real thing. Anyone who's ever struggled to open a box of cereal knows that the right design makes a big difference.
Be the 1st to Comment
« February 2016 | Main Index | Archives | April 2016 »
Search the Gazette:

This page is an archive of entries from March 2016 listed from newest to oldest.

February 2016 is the previous archive.