Running Down the Rabbit Hole

Wait. Is it really "down the rabbit hole," or is it "down the rabbit trail"? Or is it "bunny trail"? Hold that thought; it might become relevant later on.
I went for a run on Wednesday after work, the first one this year (in Midland). It was...well...you know how sometimes you get into a workout and it starts out hard and you're feeling miserable but at some point you settle into a groove and it becomes almost effortless and you think you could just do it forever? This was nothing like that. It started out bad and basically stayed that way, until the point where it got worse. Which was almost immediately. 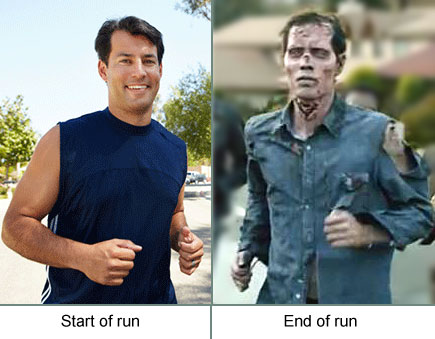 In all honesty, I didn't look this good at either the beginning or end.
In 45 minutes of running primarily on the trails around the neighborhood, I managed only a painful 4.3 miles, and I was dead tired when I got home. The next day, my legs — and my quadriceps in particular — were incredibly sore. I couldn't help wondering why running outside was so different than running on a treadmill, and why my frequent workout on an elliptical trainer didn't better prepare me for that run. Naturally, I turned to Mr. Google for answers, and he helpfully provided some potentially useful links.
The first one was a general discussion of the pros and cons of running on a treadmill, and the key takeaway is that there's really no difference other than the presence of wind resistance and the possibility of terrain changes when running outside. The article then offered this simple tip, via reference to a scientific study: set your treadmill on a 1% incline and it will provide exactly the same workout as running outside. Genius! Why didn't I think of that?
But I wasn't content to leave it there, so I followed some other links, including one on the respected Runner's World website. That article muddied the waters considerably, stating that the 1% guideline was "mostly urban myth." It in turn linked to this blog post by Dr. Casey Kerrigan. Kerrigan seems to be a fairly credible source, given her background as a distance runner, Harvard-educated physician, and noted researcher specializing in running biomechanics.
With support from the National Institute of Health, she has done extensive studies on treadmill running. One of those studies demonstrated that there is absolutely no significant biomechanical differences in treadmill workouts done at slight inclines, declines, or when level. Her article also cited the results of this study concluding that treadmill workouts are more efficient than any other type of indoor exercise equipment (sorry, elliptical/stairmaster/rowing machine/exercise bike owners).
Winding my way down this rabbit hole (see what I did there?) made me feel better about running on a treadmill, but it did nothing to explain why that outdoor run was so challenging. So I have to offer my own theory. Neither the treadmill nor the elliptical can duplicate the challenges of running along a rutted trail where footing is often sketchy and the surface varies from sand to hard-packed caliche to loose rocks (and while it's a bit too early for this to be a big concern, later on I would be additionally distracted by the possibility of rattlesnakes in the road). I realized during the run that I was lifting my feet higher on the trail to navigate around and over the dips, ruts, and rocks, and I think this put a lot more stress on my legs than running indoors or on pavement.
In the end, it boils down to a simple rule - specificity of training. You can get aerobically fit by cycling...but cycling alone will not ensure that you can run a marathon. (The reverse is also true; running will not get you into cycling condition; your legs and lungs might be up to the task, but cycling stresses other parts of your body and you'll realize that after about 30 minutes on that narrow saddle). So, if I want to get more comfortable with trail running, I simply have to do more trail running.
Posted on March 10, 2017 3:14 PM | No Comments

PSA: Ballroom Music for DJs is the next entry in this blog.