The Greatest Generation: A POW's Story

As they marched us back from the river, one soldier was carrying an American flag. That flag was a beautiful sight. I wish that flag could have the same meaning to everyone in this country now.
-- Loy Dean Lawler
Dr. Loy Dean Lawler was an optometrist who practiced for many years in Mount Pleasant, Texas. He was my wife's uncle (well, the relationship is a bit more complicated than that, but it will suffice). Loy Dean passed away in 2010 at age 86, a well-respected and devout gentleman.
He was also an Army veteran who was awarded two Purple Hearts and the Bronze Star. He endured four months as a prisoner of war, captured by the Germans along with thousands of his fellow American soldiers following the Battle of the Bulge.
In 1995, after returning from a reunion of the 106th Infantry Division (the first and only such reunion he could bring himself to attend), Dr. Lawler wrote his memoir of that ordeal. What follows is sometimes hard to read, but perhaps even harder for those of us raised in security and freedom to relate to. It's a stark reminder of the sacrifices that those who came before made so that we can enjoy that security and freedom. It's difficult to know exactly how to express gratitude for these sacrifices, but the least we can do is...never forget.

POW Experience
Dr. Loy Dean Lawler, Mount Pleasant, Texas
I was captured near Schoenberg close to the German border about 4:00 P.M. on December 19, 1944. I was with the 106th Infantry Division, 423rd Infantry Regiment, 2nd Battalion, Company E, 1st Platoon. Captain Maxey Crews was our company commander. We had 4 or 5 left out of our platoon. The rest were killed, wounded, or simply missing. We had not had food or been warm or dry since the morning of December 16th. 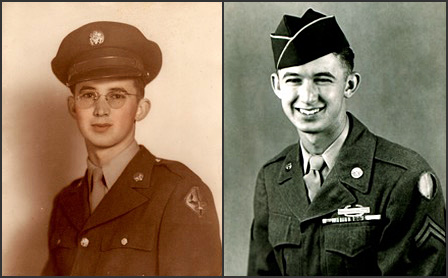 Loy Dean Lawler as a new recruit in the Army Specialized Training Program (left),
and as a corporal after his return. He quipped that "any POW who survived
got an immediate promotion - some way to get a promotion, huh?"
I don't remember where (maybe Trebsen, Germany), but the 69th Division took us to some barracks where we were billeted for a few days. During the first night with this I&R platoon, 273rd Infantry, 69th Division, we broke into the mess hall and stole most of their food. We returned most of it later when we found out we couldn't eat as much as we thought we could.
We were next sent to Camp Lucky Strike in France. After about two weeks and what I then thought was good food, we were put on a Liberty ship on our way back to Newport News, Virginia. A friend of mine, B. J. Carmichael, and I stayed on deck all the time. We never saw our assigned bunks.
This coincidence is worth mentioning. B. J. Carmichael, from Dallas, Texas, and I took our basic training in Camp Wheeler, Georgia. From there we were sent to the University of Alabama under the ASTP. We were still put in the same unit. We were then sent to Camp Atterbury, Indiana, still together. We went overseas to England and France, still together. During the Battle of the Bulge, around St. Vith, we were separated. After we were captured, we were together again. When were put in the boxcars on the way to Stalag IVB, we were together. Out of the thousands at IVB, we were in the same barracks and we both were picked for a group of 100 Americans to go to work in a Russian work camp with 400 Russians. A day or two after I went to this German hospital, here came Carmichael.
We were together until liberated and sent to Camp Lucky Strike. Out of the thousands there, we were still on the same Liberty Ship back to the States. Finally, he was discharged from Ft. Ord, California, and I from Ft. Hood, Texas, but not before we spent a recuperation leave together in Hot Springs, Arkansas.
We haven't seen much of each other since. It is a shame we haven't, but I think both of us didn't care to dwell on the past all that much. He will always be special to me. While the bullets were flying around, I can still hear him hollering for me to "get down."
To regress a bit, back to the work camp, I twice was put on a detail of about 6 guys to clean out the furnaces at the factory (or plant) where we worked. The ovens looked like pictures I later saw of these ovens where bodies were cremated. This was on a Sunday, supposedly our only day off. The oven doors were just big enough to crawl in, one man to a furnace. While scraping the wall down good, we stood on some grates above a bed of coals that were still hot. We couldn't stay in the ovens very long at a time. There was enough room for us to fall through the grates, but this was one time everyone was real careful. The only air we got was from the open oven door.
I say all of the above to say this. This wasn't any worse than having to stand out in the cold snow and ice at the brickette factory 12 hours a day with just a pair of G.I. boots on your feet. G.I. boots are not warm and they are not waterproof. There ought to be a special place in hell for the person who sold the Army those boots. My feet are still cold.
I know I have rambled around a bit and hit a few highlights. After almost 50 years there is no way I can remember everything. To those of you who were there, you can understand.

If you're interested in learning more about the details of the battle leading up to the capture of American soldiers following the Battle of the Bulge, feel free to check out the following accounts:

Many thanks to Loy Dean's daughter Mercy and his niece Becky for providing access to this story and photos. This has been posted with Mercy's permission.
I've posted this for two reasons. First, it's a way for me to honor a man with whom I was acquainted for decades, but only recently came to know this chapter of his story. Like so many of his generation, he rarely spoke of his wartime experiences.
Which brings me to the second reason: these veterans are leaving us at an alarming and increasing rate, and with them go the stories that illuminate their lives and educate their descendants. Those stories need to be preserved, and this is one way to do that. I did that in 2011 for my dad, and it's an honor to do that in 2017 for Loy Dean Lawler.
You may not have a similar outlet for preserving the stories of those veterans closest to you; regardless, try to take some time to interview them and capture some of their experiences and memories.
Be the 1st to Comment
« May 2017 | Main Index | Archives | August 2017 »
Search the Gazette:

This page is an archive of entries from June 2017 listed from newest to oldest.