One of my goals in retirement is to spend more time with my camera, doing some creative things with it and Photoshop. I've managed to check off a few projects on a rather lengthy list, so yesterday I grabbed my macro lens and ring flash and went hunting. Here are some of the subjects that caught my eye.
There's a particularly gnarled oak tree in the lot adjacent to ours. I see the face of an owl. What do you see? 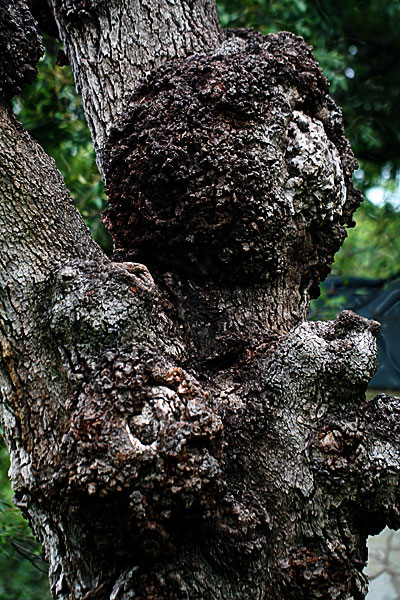 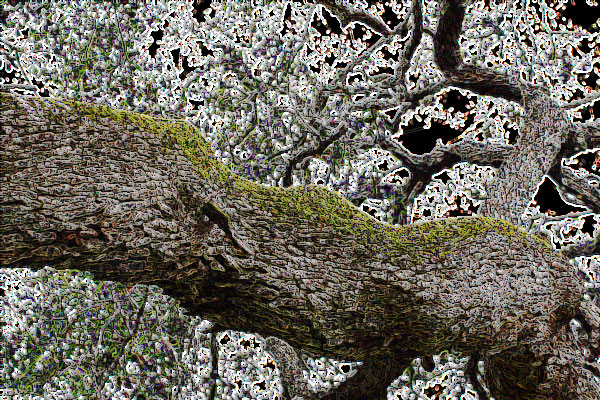 I don't know what species of grass this is, but the seedheads are unique. 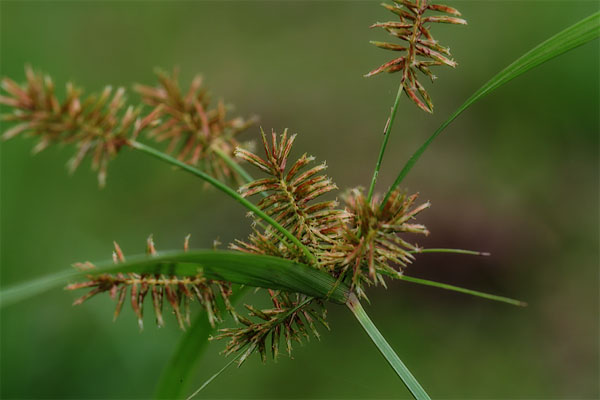 I was so focused on the wasp that I never noticed the mayfly (that's what I'm calling it in the absence of any actual knowledge) until I placed the image here. 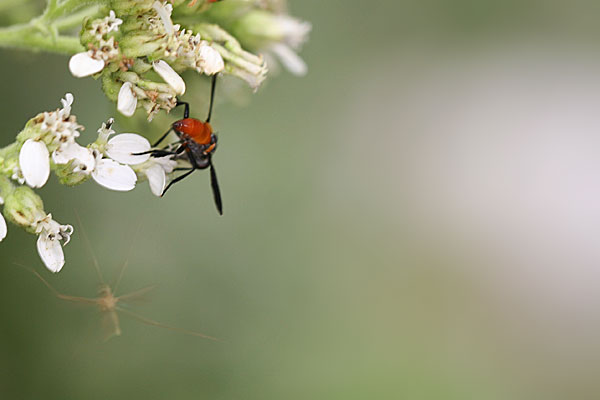 The turtle is the anchor for this photo, but there's lots more going on if you look closely enough. 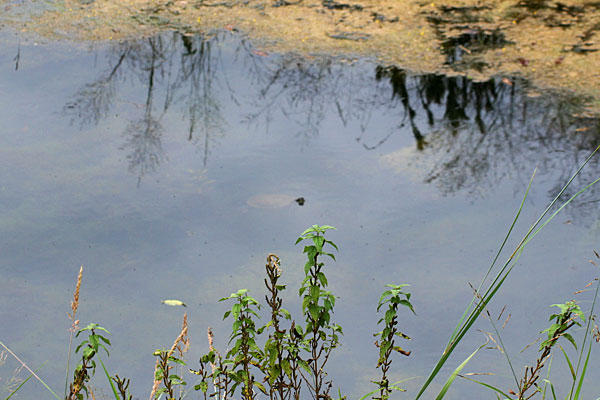 Toadstools and mushrooms are abundant lately. 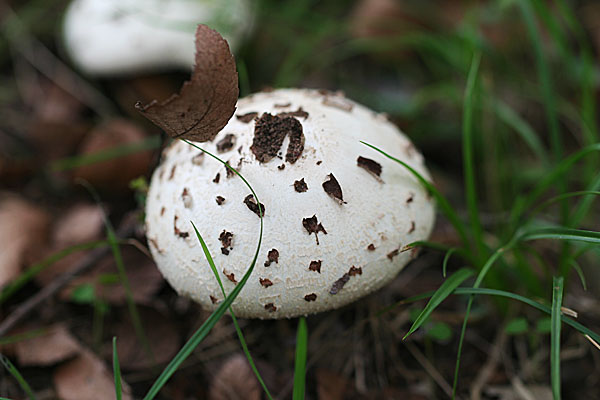 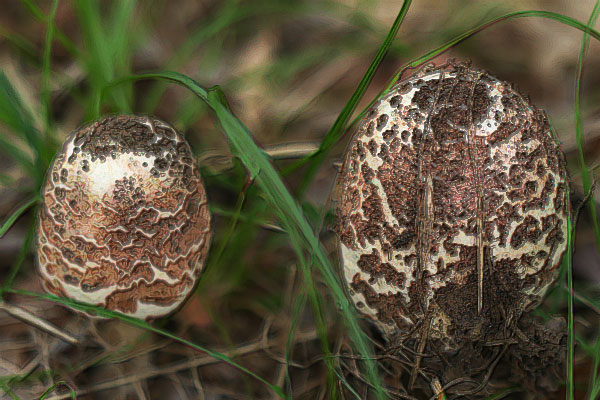 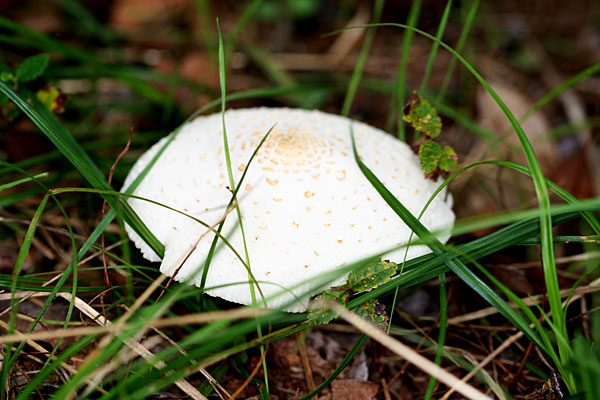 This grasshopper appears to be praying over its dinner salad. 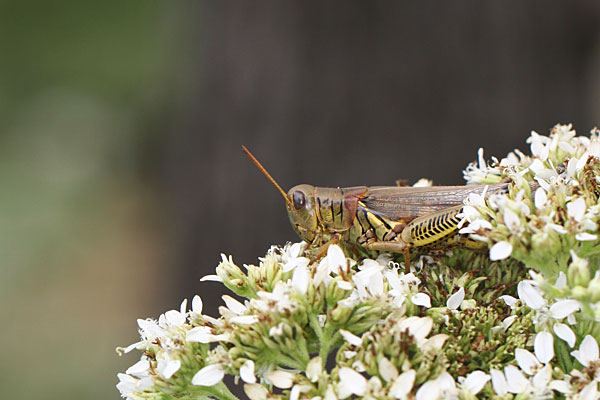 Granite boulders of all sizes litter the banks of Pecan Creek. 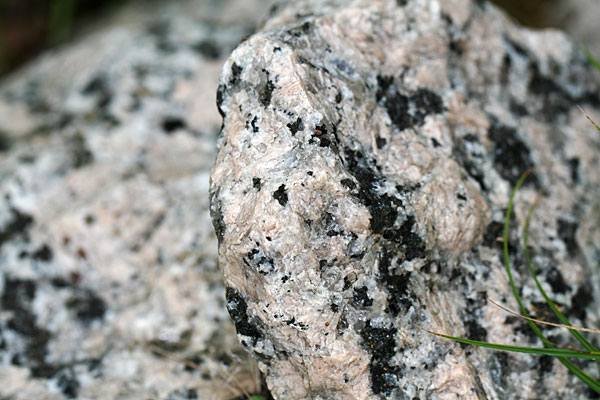 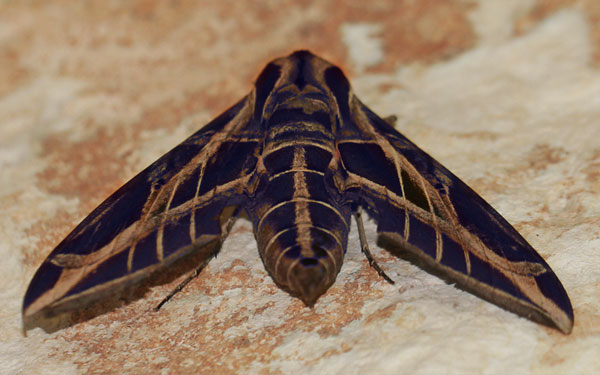 Someone has requested photos of deer. I aim to please. 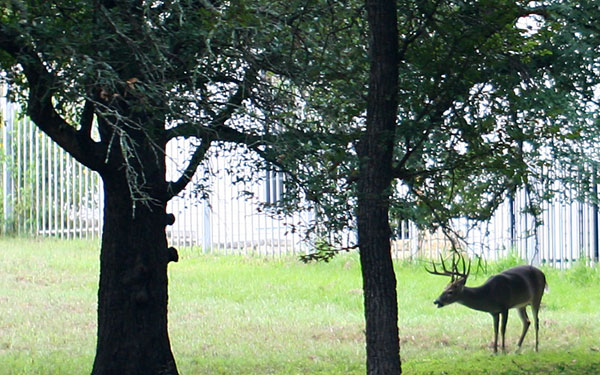 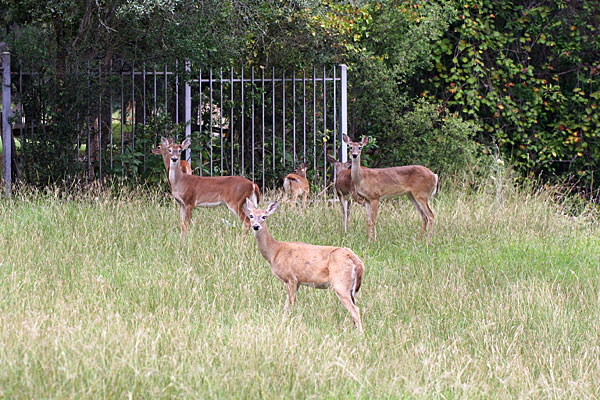 Here are some logs for your viewing pleasure. 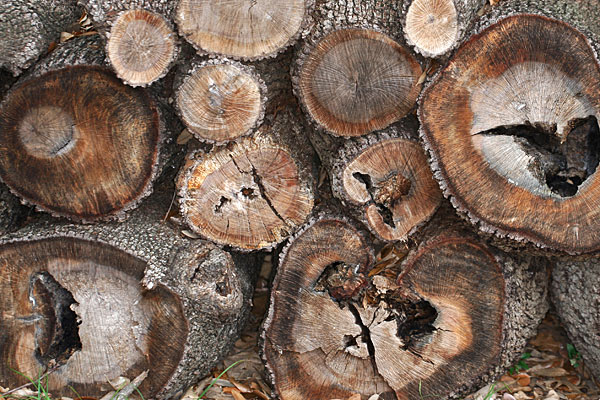 I'm sure you noticed that a few of the preceding photos showed a bit of Photoshop manipulation. I sometimes do that in an attempt to bring a different perspective to a familiar scene or subject; mostly it's simply to enhance the image (I have some really good lenses, but a really mediocre camera).
But sometimes, it's just for fun.

By day and from a distance, it's a rather unassuming live oak trunk... 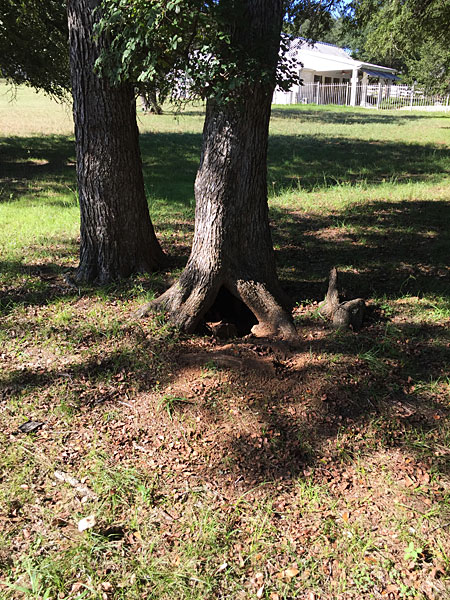 But when the sun goes down, it's a whole other story... 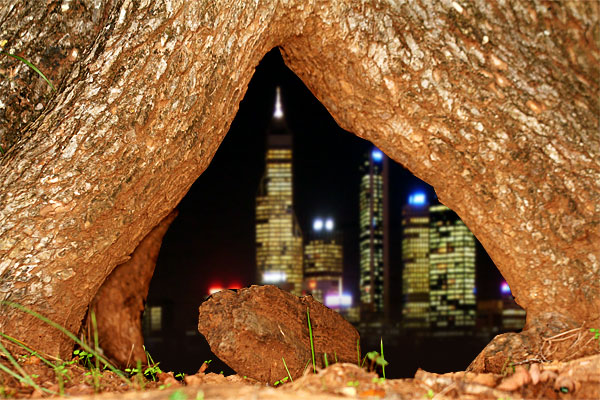 I love the look of these tree fungi. This one is growing horizontally almost six inches on the trunk of a live oak next to our house. The color gradiation is simply amazing (and, no, that's NOT Photoshop at work). 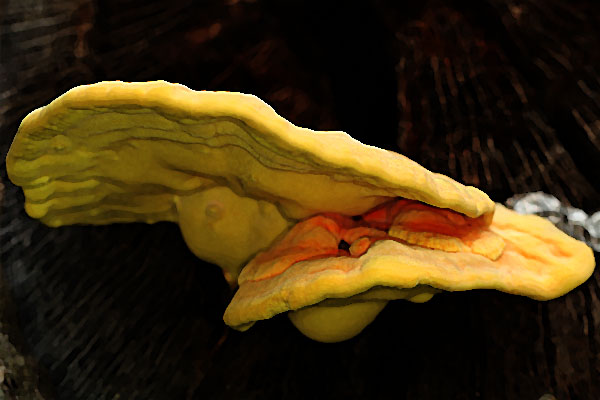 But as I contemplate this photo, it reminds me of something else... 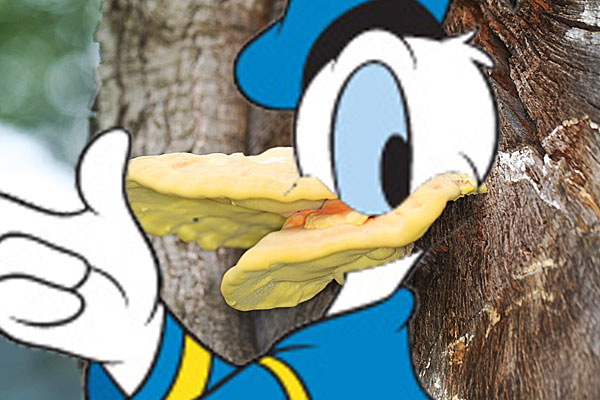 I started to boast that from now to eternity, whenever someone googles "Donald Duck fungus," this is the only page they'll get. But when I decided to double-check my boast, I found that I'm not even the first to use the term, much less the only one. Sheesh.

Paging Dr. Dolittle (or "Is someone building an ark?")

I'm not a parent so I can only guess at the accuracy of what I'm about to say. I suspect that at some point in every child's life, they realize that most of those dire parental threats ("If you don't behave, Santa isn't coming." "Your face is going to freeze like that!") are idle, and not only are they no longer intimidated, they will downright flaunt the prohibited behavior, daring retribution.
I bring this up only because the animals in our neighborhood have this attitude toward my serious prohibition against wreaking havoc in our yard. Exhibit A for the prosecution:

This is a compilation of scenes from my game camera taken over the course of a single night (Sunday night/Monday morning). How many species can you identify?
I'll break it down for you:
To compound the insults, you might notice that two of the inorganic, inanimate objects in this little farce are traps intended to imprison at least two of these critters. Neither accomplished its purpose.
IN FACT...
Check this out. 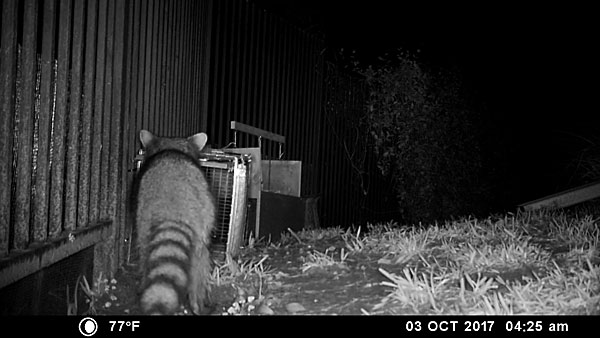 A half hour prior to the raccoon's appearance documented above, it (or someone impersonating it) decided to take a closer look at the trap I had baited in anticipation of just such an inquiry. We already know the outcome, don't we? What we don't yet know is just how impudent and contumelious this creature's behavior will be. 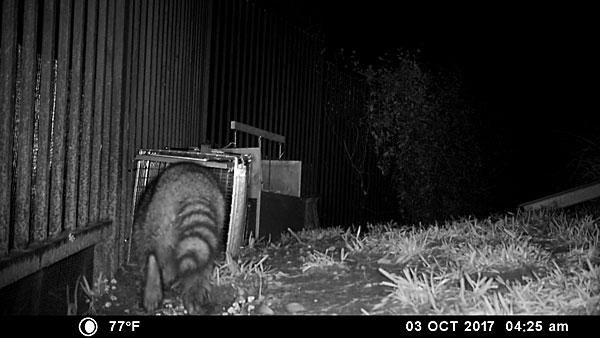 Do you see that? DO YOU SEE THAT? It's IN THE TRAP, dining on sardines, and mooning my game camera. *Rodney Dangerfield voice* I tell you, I get no respect.
Update: Just when I thought things couldn't get any weirder...this happened this morning.

The buzzard knew something smelled deliciously dead (five-day-old-sardines remnants), but darned if he could figure out how to get to it.
Be the 1st to Comment

Well, I may not be able to outsmart a raccoon, but that doesn't mean I'm a total trapping failure.
Last Saturday I awoke to find that the door on the trap was closed, but through the bathroom window I couldn't identify the occupant. I got dressed and walked through the back yard and around the corner with my phone's video recorder going. Here's what I found:
Later, I reviewed the photos from my game camera, which I had focused on the trap, and was able to recreate the timeline of the capture. 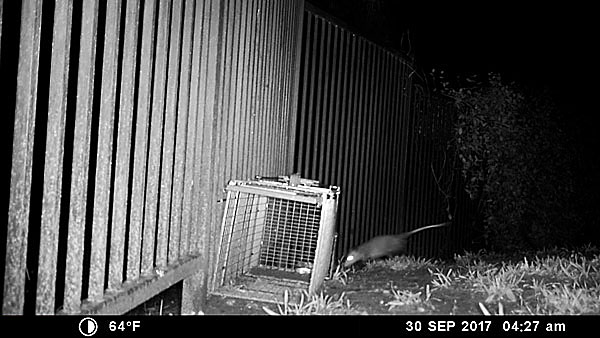 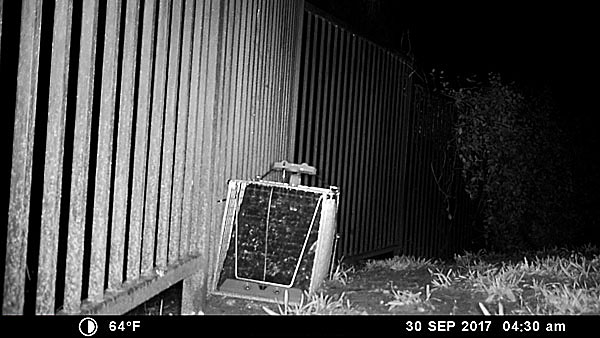 The trap door closes sometime between 4:27 & 4:30, presumably to the possum's chagrin. 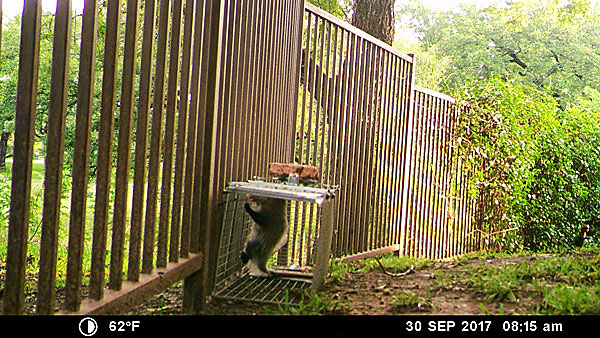 Daylight arrives, but the possum doesn't depart, despite the open door.
The rock on top of the cage is to keep the trap from closing again, when/if
the prisoner decides to accept the terms of his parole.
Alert Gazette readers will recall that this was not my first possum encounter. I much prefer the live ones to those of the deceased persuasion. They're actually a fascinating species, being almost totally resistant to the venom of rattlesnakes and water mocassins (which ruled out one of my cause-of-death theories espoused in the preceding link), and quite resistant to rabies.
Also, that "playing possum" deal is a real thing, but it appears to be an involuntary, uncontrollable act, much like Trump's tweets. The catatonic state can last up to several hours. This behavior is not present in babies, nor well-developed in juveniles, which might explain why this young one merely clung to the side of the cage when approached.
I'm fairly confident that possums aren't culprits in the systematic destruction of our yard and flower beds, so I had no qualms about releasing this one back into the neighborhood.
Be the 1st to Comment
« September 2017 | Main Index | Archives | November 2017 »
Search the Gazette:

This page is an archive of entries from October 2017 listed from newest to oldest.

September 2017 is the previous archive.

November 2017 is the next archive.