It's been a while since I posted a time lapse bike ride video. I realize most of you have little interest in these short movies, unless you like to ride vicariously through some [mostly] pretty scenery. But some of you may live in Horseshoe Bay and for you I issue the challenge of identifying the route we take on this particular ride.
As hints I will say that the ride begins and ends in Pecan Creek, and winds through HSB proper. Other than that, you're on your own to figure out where we go.

If you're a cyclist, you might have noticed -- perhaps with a bit of envy -- how few vehicles we encountered during this 18 mile jaunt through a town in the middle of the afternoon. Granted, most of the route was on residential streets (about 3 miles was on a ranch-to-market road that is pretty heavily traveled, but it has a very wide shoulder and a 45-mph speed limit) and the one-photo-per-30-seconds video capture may not always accurately represent overall reality, but this dearth of traffic is actually the standard scenario. It does make for pleasant cycling experiences.
If the one-second-per-scene video didn't provide enough context to map out our route, here's the Relive video provided by MLB showing an aerial view of the course.

Note that we refer to this particular route as our flat ride. We have another one that winds through Horseshoe Bay West, and if you've ever been in that area, you'll know why it's our "hilly ride."
Be the 1st to Comment

Last weekend, we discovered we were hosting unanticipated visitors in the form of a herd of juvenile rock squirrels. At one point, I counted six (6!) of them cavorting on and around our back yard deck. When they detected our presence, they would quickly dive under the deck, but just as quickly reappear.
We had seen adult rock squirrels living among the rocks (duh) lining the bank of the creek, but never considered that they might move from that environment to our back yard. I didn't particularly relish the thought of having a dray (look it up) living under the deck -- and I have no idea what the resident possum family thought about the new neighbors -- but grudgingly admitted that the young ones were fun to watch.
I put a GoPro camera on a stake and captured some of the following photos of the children at play. Other photos were taken from inside the house using a zoom lens. Click on each small photo to see a larger version. 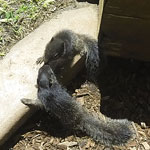 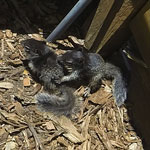 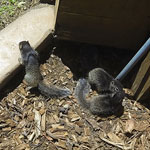 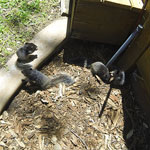 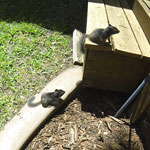 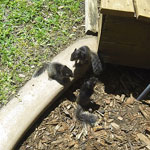 We watched them on and off through the weekend. An adult squirrel -- presumably either the mother or father -- would occasionally venture into the yard, but oddly enough it would generally retreat over the retaining wall to the creek bank rather than joining the kits under the deck.
But that changed on Sunday afternoon. With friends visiting, we were watching the squirrels go about their now-familiar busyness when we saw the adult (let's call it the mother) run across the lawn with something...furry...in her mouth. She was too fast to get a good look, but there seemed to be fewer kits playing than before. After we watched a repeat of that behavior, it was obvious that she was grabbing the youngsters one-by-one and taking them back to the creek bank. I grabbed my camera, as one does. I wasn't able to get any really clear photos, but I think you can discern the process of evacuating the pups.

I'm sure there's a logical explanation for temporary appearance and subsequent relocation to the more usual habitat, but here's my theory. I think this was the rock squirrel equivalent of a spring break trip for the kids to Disneyworld. All good things must come to an end, though, and the parents had to get back to work on Monday, so home they went. I'll be happy to entertain a better explanation.
In any event, the youngsters had no trouble readjusting to their creekside home. At almost any point during the day, we can peer over the fence and watch them busily engaged in their squirrely activities.

Hate to end on a down note, but I suspect the snakes that live in and along the creek may be pretty happy about the return of this family, as well. But, so far, all six of the young ones are still up and around.
1 Comment

It's probably common knowledge that beavers slap the water with their tails as a warning about - or an attempt to startle - potential predators. They also tend to swim with their heads slightly above water but with their bodies slightly submerged.
So, you may be ask, why are you - a native Texan living in the heart of a beaver-impoverished state - giving this random lecture about the creature's behavior? Simply this: I watched a beaver swim in the creek behind our house last night. I have never heard of a beaver sighting in this area, much less seen one myself, and I'm still trying to wrap my head around the fact that they are indeed living in our neighborhood.
We came home around dusk after eating out with friends, and there were some significant thunderheads building up in the north, so I walking into the back yard to observe them. Our weather was calm and there was still enough light to see the creek, so I stood at the back fence and looked down at the water, about twenty feet away.
I saw a shape moving in the water and my first thought was "that's the biggest catfish I've ever seen in the creek!" My second thought was, "wait...what? We don't have catfish in the creek." The shape appeared to be 2-3' long, trailing something wide. I mentally cycled through some possibilities, trying to place it in a logical context. I knew there were nutria around the lake, but those are basically big rats with long skinny tails, and that didn't fit the profile of what I was watching.
The shape continued to swim slowly down the middle of the stream, and I figured I should attempt to get a photo or video to prove my sanity, even though the fading light made it doubtful that my aging phone's camera would capture anything recognizable. And fail it did, although perhaps not entirely of its own fault. What I managed to record was approximately five seconds of the ground.* 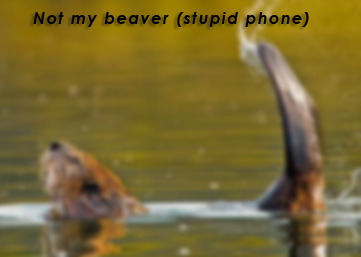 My view of the animal was blocked by a tree on the creek bank, but I expected it to come into sight in a clearing a few feet down the stream. It didn't, so I decided it had doubled back. I moved back down the fence line and sure enough, it was swimming the other direction. But my movement apparently caught its attention and its reaction confirmed that what I was watching was indeed a beaver. With a loud slap of the water's surface with its tail, it disappeared and I did not spot it again.
I described the encounter to MLB and she was initially skeptical, but after an extended conversation with Mr. Google, she confirmed that beavers are present pretty much throughout Texas, with the exception of the western part of the state. We also learned that they prefer still water, but Pecan Creek is very slow-moving with limpid pools forming at various bends, so it would not necessarily be a beaver-unfriendly environment. And, finally, they are most active right around dusk and dawn.
I realize that some of you live in areas where beavers are plentiful, but for me, this was akin to spotting a cheetah in our back yard. The variety of local wildlife continues to be a constant source of amazement and pleasure.
Have you ever encountered unexpected wildlife in your neighborhood? Tell us about it in the comments!
*Some of the fotografic failure was the fone's fault. You may have heard about the battery-related slowdowns in old iPhone models, and my 6s is dealing with that now. The camera is so slow to respond that when I tapped the record button and nothing happened, I hit it again. That resulted in my turning off the video instead of turning it on. Rinse and repeat, and the result is intriguing moving images of...dirt.
Be the 1st to Comment
« March 2018 | Main Index | Archives | May 2018 »
Search the Gazette:

This page is an archive of entries from April 2018 listed from newest to oldest.

March 2018 is the previous archive.