The Mystery of the Murdered Fawn

It's been an interesting week or so here at Casa de Fire Ant, thanks to the endless parade of wildlife traipsing past our abode, occasionally stopping to destroy our lawn on their way to whatever other endeavors attract them.
Last week, we went out of town for a couple of days but I left my game camera activated to see what went on in our absence. That turned out to be a wise decision, from this amateur naturalist's perspective. I've stitched together something like a "best of" compilation from the several hundred photos and short videos recorded by the camera.
While the buzzards provided a bit of comic relief, the obvious star of the show is the bobcat that appears around the one minute mark of the video. We had recently heard reports of a bobcat in the neighborhood but this was the first time since we moved here two years ago that I've actually captured an image of one. Here are another couple of looks at the big cat: 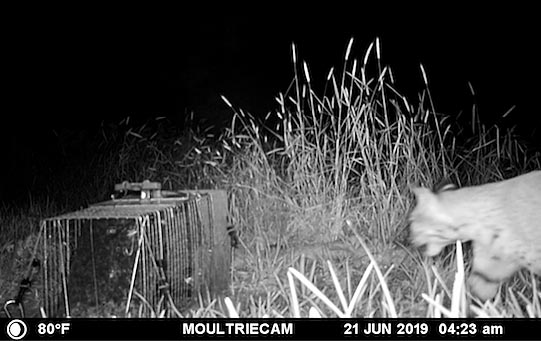 Note the distinctive black bands on the front legs, a distinguishing mark of the species. 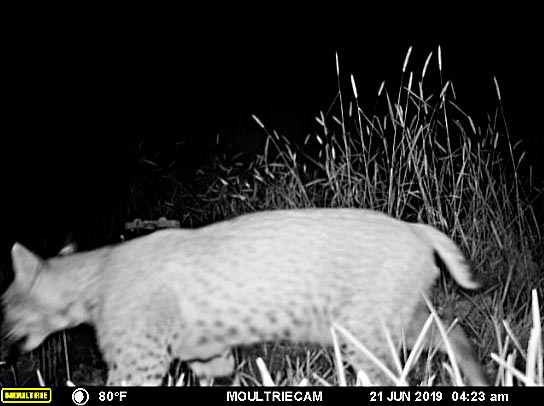 The bobcat's name derives from its stubby tail; the spots on the fur are another distinction.
The bobcat appeared on camera again, a couple of nights later, at almost the same early morning time. It walked so close to the camera that this is the only image that was captured. 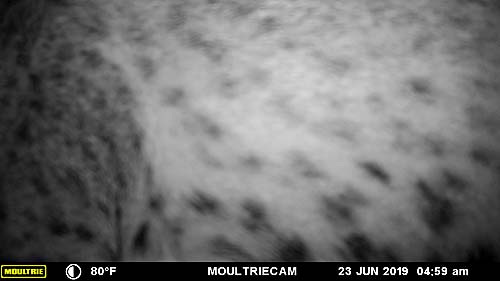 A day or so later, I noticed a flurry of activity on the ground in the vacant lot on the west side of our house. It was a gathering of buzzards, and even from a distance I could see that they were intent on devouring something. 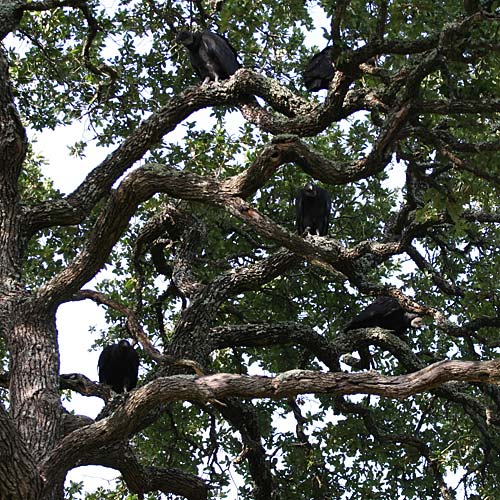 Four buzzards in a live oak tree
I walked over and the scavengers flew into nearby trees, unwilling to completely abandon their meal, which, to my dismay, was a whitetail fawn. The carcass was significantly damaged, but I couldn't discern whether that was due to the work of the buzzards or evidence of the fatal attack by...something.
Of course, my immediate thought was that the bobcat was responsible; its repeated appearance in conjunction with the dead fawn seemed like more than coincidence. Bobcats are known to take young deer, even though the latter are often larger than the cat.
However, the more I learned about both the bobcat and the other predators that prey on fawns, the less sure I became about the identity of the perpetrator. It seems that bobcats don't usually leave their prey after a kill. It's also entirely possible that a raptor such as a hawk or an eagle could kill a very young fawn, and there are red-shouldered hawks nesting in the trees (see photos below) near where I found the carcass. (I was also told that caracaras have been known to prey upon fawns -- yeah, I had to look them up, too. I've never seen one but that doesn't mean they're not around. The Audubon link shows that they're "uncommon" in this part of Texas; their common Texas habitat is in the far southern part of the state.) 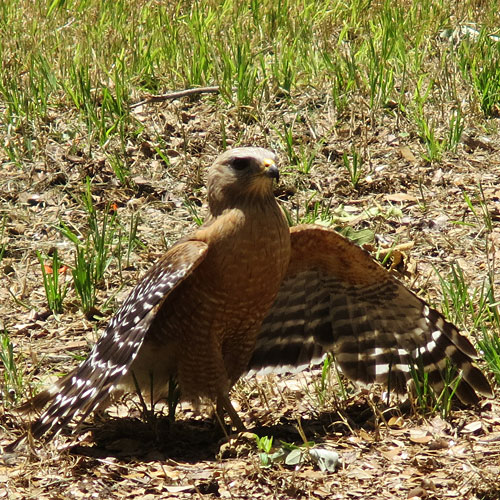 Red-shouldered hawk sunning itself next to our driveway 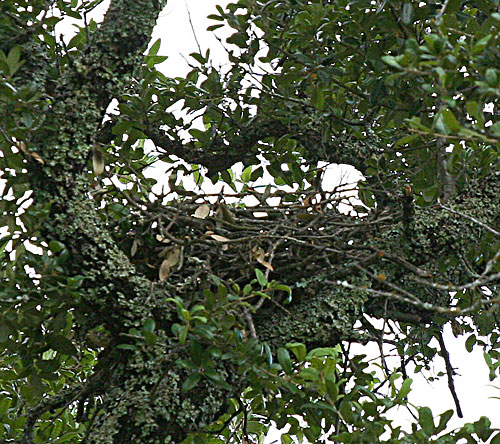 This hawk nest is about fifty feet above the ground, in a tree in the same vacant lot where the fawn carcass was found.
At the end of the day, the mystery of the deceased fawn is still just that: a mystery. I still lean toward the bobcat as the prime suspect, but we haven't even considered that a copperhead or rattlesnake dispatched the little guy. It's a tough world out there, sometimes, and the story doesn't always have a happy ending.
2 Comments

News You Can Use To Snooze

[Ed. note -- This is actually a Random Thursday (Monday edition) post, but the author has overridden staff protests in order to use, in his words, "an ever-so-cute" headline.]
First, please feel free to ignore my editor's snarky comment, which stems from an obvious case of envy. Those who can't write, edit.

Alert Gazette readers will recall a couple of previous posts -- here and here -- about Atlantic Richfield's Corporate artwork collection and my minor role in helping to dispose of it following BP's devouring acquisition of ARCO. Even though it all took place more than a decade ago, I still get occasional inquiries about it from various "stakeholders" who have apparently exhausted all legitimate and credible sources of information. A lot of these inquiries originate in California, where ARCO was headquartered, and I'm able to answer almost none of their questions since I only dealt with the artwork in the Midland (Texas) office.
But I received an email last week from someone in Midland asking about a specific piece that they had acquired. They had the artist's last name and an ARCO-assigned serial number and asked if I had any additional information about the piece. I pulled up the old inventory and, sure enough, found the artwork in question (an intaglio print from 1972). The person expressed excitement over the new info, but then asked if I had any information regarding the value of the print.
I did have an appraisal spreadsheet provided by the Corporate department, but when I opened it, there was no value assigned to the piece in question. A review of the spreadsheet showed that only artwork appraised at more than $150 was assigned a value (there were pieces valued at up to $35,000 in our office, by the way), and thus if a piece had no appraisal, it was deemed to be of little value. I conveyed this information to the owner, expecting a response of disappointment.
Instead, I received this in reply:
Thanks Eric for all of your help! I don't feel as nervous to give it to my grandson for his college dorm room now and he loves it!
I'm now excessively proud of the work I'm doing to decorate dorm rooms. I think I'll add this skill to my LinkedIn profile.

Alert Gazette readers will...ah, never mind. I've beat that one senseless. Anyway, despite having trapped four armadillos in the last week (I'm up to 29 in total), they continue to wreak havoc on our newly sodded front lawn. Lest you accuse me of exaggeration (which, admittedly, is almost always a sure bet), here's some photographic proof of the typical damage we find each morning. 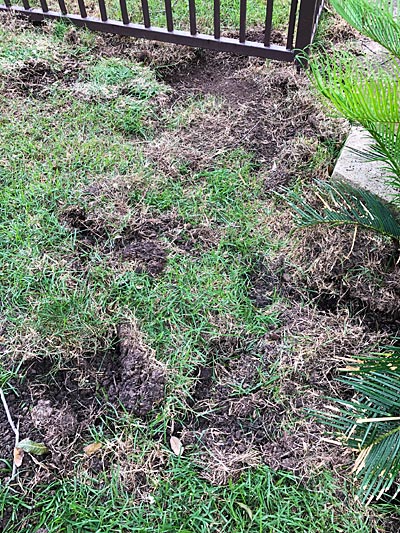 I don't have a "before" photo for comparison, as I never anticipated needing one, but I assure you that this area was nothing but smooth green turf, pre-armadillo. I confess to a complete loss of patience, and if I didn't think the neighbors would complain, there would be no future live catch-and-release in effect, if you know what I mean and I think you do. 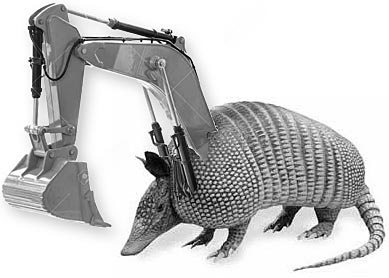 The Fourth of July Decorating Commences

The city of Horseshoe Bay has an Independence Day parade* every year and it's open to anyone with a vehicle capable of going a couple of miles down city streets. So, last year MLB and I decorated our tandem recumbent bicycle and pedaled along the route, sandwiched between a Seventies-era Mustang convertible and a 1953 Mercury convertible. We hung a few flags from the bike, put some red, white and blue glittery wreaths on the rear rack and wrapped the frame with decorative ribbon, and we felt pretty festive.
We're planning to do it again this year, but obviously need to step it up a bit, so we hit the Michael's in Bee Cave and came away with more ribbon, plus the stuff pictured below. I'm especially excited about the double pinwheel, which I plan on mounting on the front of the bike. My only fear is that I'll be hypnotized by the spinning colors and we'll fall off in front of the throngs lining the street. Wouldn't be the first time, but that's another story for another time. Or never. 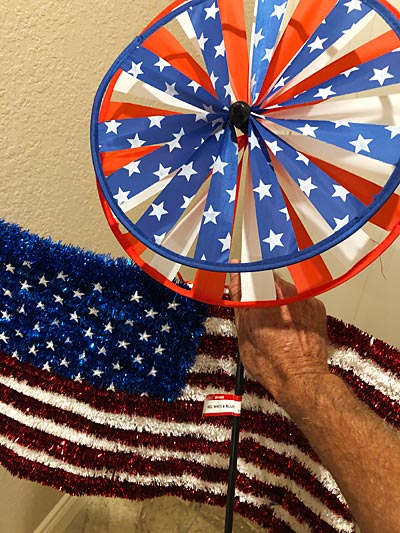 *They actually have three parades. One takes place on the lake and is for boats (duh), and another is a short jaunt for kids on bikes and trikes. Pretty sure we don't qualify for either of these.
Be the 1st to Comment

Note: The following contains critical armadillo trapping advice. Ignore it at your own peril. You've been warned. There's also a walking stick gif.
Alert Gazette readers will recall the account of my armadillo trapping woes, wherein the creatures were zooming in and out of the malfunctioning trap as if it were a port-a-potty next to a Tijuana taco stand*.
This situation quickly escalated from a frustrating inconvenience into a costly debacle as the armadillo(s) began to cause significant damage to the several thousand dollars worth of new zoysia sod installed in our yard. I'm not talking about a few holes here and there. The animals were actually burrowing under entire sections of sod and rolling them up like rugs. I was desperate for a solution.
I went so far as to use a Dremel tool to smooth any rough edges on the trap doors and the side channel guides to reduce the possibility of binding when they dropped down. I tested the trap and it seemed to work perfectly, but the next morning (and the morning after that), I found one door dropped and the other one halfway down and in a bind, indicating (or so I thought) another in-and-out armadillo escape. And our lawn continued to look like a used-up minefield. I finally gave up and ordered a new trap. 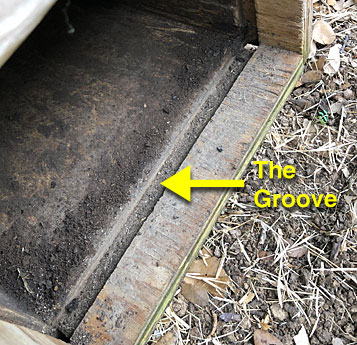 The new trap arrived yesterday and as I unpacked and assembled it, I took the unprecedented step of reading the instructions and tips that came with it. This caught my eye: Armadillos are messy. When they are caught, they will cause dirt to fill the bottom door grooves. Clean them from time to time, or the doors will not close properly.
"Whoa!" I thought, "what if the problem is not that the doors aren't falling shut, but that they're being forced open again by a trapped armadillo?" I had never considered this possibility, but when I inspected the trap I found that the bottom door grooves were indeed packed with dirt so that the doors dropped down level with the floor...and the armadillos were able to either nose one of them up, or reach under with a claw. The purpose of that groove was obviously to prevent the animal from lifting up the door from the bottom. And what I assumed was a trap door that stuck on the way down was actually one that had been put in a bind when it was lifted by the escaping animal.
It was a simple matter to test this theory. I cleaned out the grooves and placed the trap along the path where they normally ambled before diving into our lawn (they are definitely creatures of habit). And this morning when I looked outside, both doors were down and there was a snoozing-and-securely-trapped armadillo inside.
The irony is that while my enlightenment came as a result of reading the material that accompanied the new trap, the new trap trapped nothing last night, while the old trap did the work. Anyway, I'm not naive enough to think there's only one armadillo in our neck of the neighborhood, and now I've got both sides of the yard armed and ready for additional action.
Oh, and here's the updated headcount, in case you're wondering:

And here's a walking stick gif, because not everything is about mammals:

*I have no idea what this means, but I'm told it's always a good idea to add a simile or metaphor or something to otherwise boring narrative.
1 Comment
« May 2019 | Main Index | Archives | July 2019 »
Search the Gazette:

This page is an archive of entries from June 2019 listed from newest to oldest.