A couple of weeks ago I spotted something in the adjacent vacant lot that looked out of place. It was a turtle -- a Texas river cooter (Pseudemys texana) to be precise -- in the process of creating a "nest" in which to deposit eggs. Being the insensitive-and-nosy jerk I am, I immediately set up a couple of cameras on tripods to record the process. (Alert Gazette readers will recall that this isn't my first turtle-egg-laying rodeo.)
While I didn't catch the mother-to-be at the very beginning of her quest, she was early in the process and I was able to video and photograph it through the very end, and it took a couple of hours (and a few swap-outs to recharge batteries).
The nest building process is fascinating to me. The turtle had picked out a seemingly random location about a seventy-five yards from the creek where she resided. Using only her back legs, she dug a hole at least nine inches deep. The soil was completely dry when she started, but somehow during the process she emitted enough water to create a muddy environment before laying the eggs. When the laying process started, after each egg was deposited, she pushed it down into the hole with a hind leg. That action seemed to be rude and rough, but the leathery shells weren't damaged, nor were their contents (I assume).
I didn't hang around to observe the entire two hours, but I did check back in time to watch the actual egg-laying, and I counted at least eleven eggs. 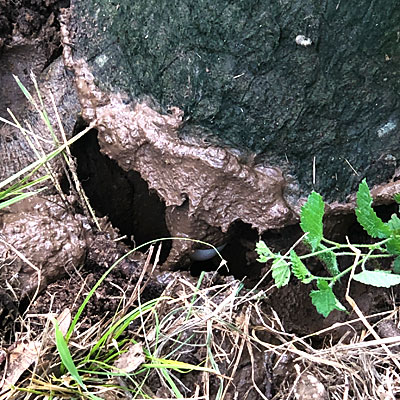 Turtle egg being deposited in new nest
Once all eggs were deposited, she reversed the initial process. Again, using only her hind legs, the turtle pulled dirt and plant material back over the nest, and arranged it so that it was completely unobtrusive, even to a close visual inspection.
By the way, turtles get no respect when it comes to baby animal names. "Hatchling" is about as generic as it gets. I think they deserve better, so I propose something like "turtleini." Or "turtle tot." Or "turtlette." 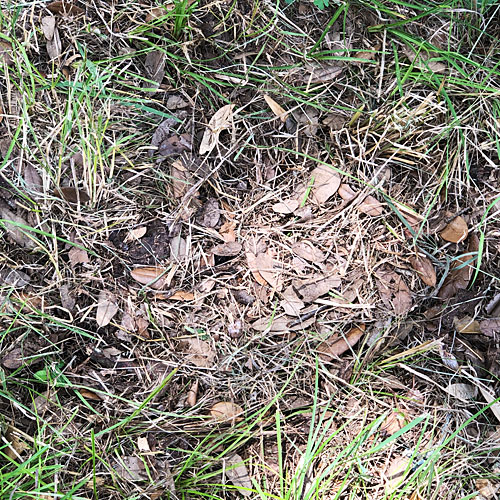 Would you have known there were a dozen turtle eggs hidden beneath this patch of ground?
It was gratifying to think that we might be able to observe the hatchlings in three-to-four months.
Or not.
As it turns out, Mother Nature is often cruel and capricious. A mere day later, I walked past the nest and it resembled a miniature bomb crater. What was indiscernible to the human eye was apparently easily discovered by one of the several species of predators that live around the creek. I counted at least eight eggs in various states of consumption (and one still whole but obviously damaged). The only remaining question was: which varmint was to blame? 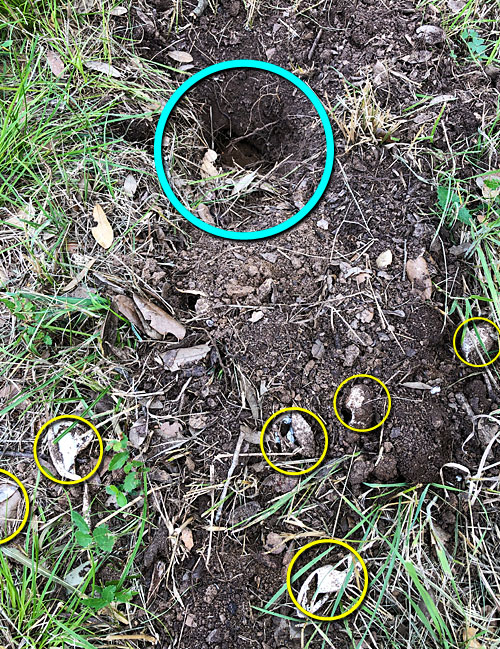 The ravaged nest, circled in blue; egg remains are circled in yellow
I theorized that whatever had attacked the nest was likely to return at least one more time, so I pointed my game camera toward that general vicinity. Sure enough, the answer appeared when I downloaded the contents of the SD card onto my computer the next morning...and that answer was a bit shocking to me. Here's a screen capture from the short video captured by the camera: 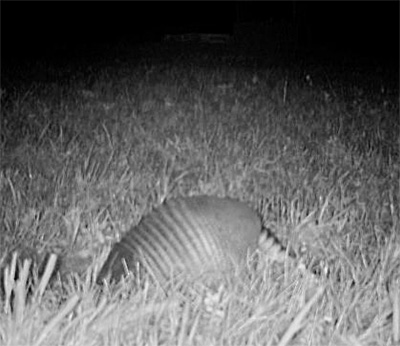 Yes, it's an armadillo, digging back into the remains of the nest.
If an armadillo would have been at the bottom of your list of potential turtle egg eaters, join the club. But, according to the Internet Center for Wildlife Damage Management (a website for which the armadillo should be the centerfold, IMHO), the species is omnivorous to an extent I never considered. I'll save you a click and give you this excerpt from the ICWDM website:

(Parenthetically, [Ed. -- This is redundant since it's already enclosed by parentheses.] this behavior received additional confirmation a few days ago when I found an armadillo in a raccoon trap baited with cat food.)
So, in the end, the river cooter's diligent efforts will likely come to naught, although it may be possible that a couple of the first eggs were deep enough to escape the marauding mammal. Such is life in the wild kingdom we call our neighborhood.
The following video is a condensed compilation of the footage I gathered over the duration of the events described above. If you have 8 1/2 minutes to burn and find moving pictures more interesting than my rambling text, feel free to check it out.
Posted on July 17, 2019 4:36 PM | No Comments

Escalating the Critter Arms Race was the previous entry in this blog.

Patriotic Weirdos on Parade is the next entry in this blog.