The squirrels are driving us nuts.

It's that time of the year when the pecan trees in our back yard begin to earn their keep by producing, well, pecans. We certainly look forward to a great harvest of that nutty goodness, with visions of pies and ice cream toppings and pecan-crusted tilapia dancing in our heads...which is where those visions will stay because since we bought this house three years ago, we have yet to taste a single homegrown pecan thanks to the ever-increasing population of squirrels.
It's bad enough that they chow down on our pecan crop before it even matures, but they add insult to injury because they drop the discarded pieces of nut onto our deck. This creates a real mess as well as a good approximation of a lego-strewn floor for the unwary barefooted resident (i.e. us). We actually can't sit on our deck during the day because of the continuous deluge.
You're probably thinking, "well, how bad could that really be?" I'm glad you asked. Just drag the yellow bar on the photo below to the left to see a before-and-after comparison to show the effects of the pecan bits raining down. 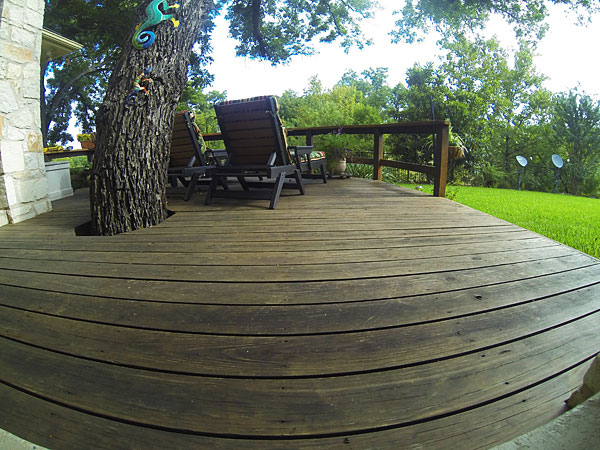 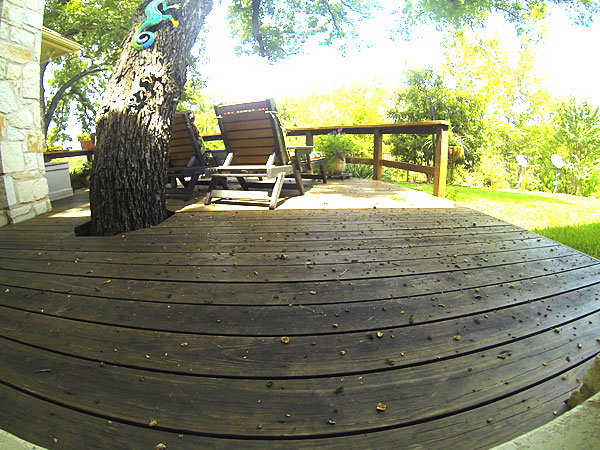 I'm not sure these photos do justice to the actual situation. It's important to understand that this mess was created in a space of three hours, and is repeated every three hours during the day until ALL. THE. PECANS. ARE. GONE. In fact, the annoyance factor is so high that I actually went to the trouble of setting up a GoPro camera to film a time lapse of the phenomenon:

This will be Exhibit A in my self-defense strategy if I'm ever hauled in for shooting up our trees with a 12-gauge.
This is, of course, a fairly short-lived problem, given that over the course of a week or so, the squirrels will completely decimate the pecan crop and go back to simply chewing our chair cushions. And, frankly, because our trees are a native variety (rather than one of those PED-amped hybrids), the nuts aren't really very good. But it's the principle of the thing, you know?
If you've followed this blog long enough, you know that I've always been partial to mammals of the Sciuridae persuasion, but I've just about reached the limit of my tolerance. (Plus, they dug up my DIY pecan pie!) I've even started to think about a solution. 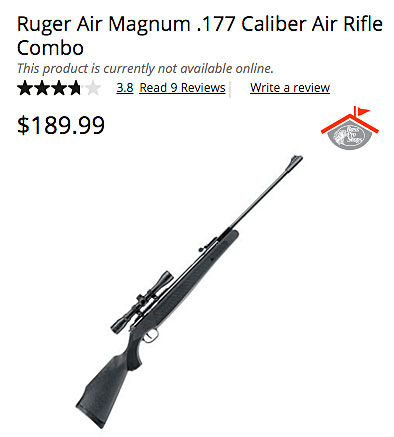 Firing shotguns within the city limits is frowned upon. This is not a shotgun.
Be the 1st to Comment

Update (8/14/19): I guess I should complain about the weather more often. Shortly after posting this, we had a brief rain shower...almost two tenths of an inch. That won't break the drought, but it certainly was enjoyable.
We've gone more than a month without measurable rainfall and the creek will likely cease flowing within the next week or so if the depressing 10-day weather forecast is accurate. The city is in a catch-22 position of banning vacant lot and pasture mowing because of the danger of wildfires resulting from sparks...but that leaves a LOT of combustible material in the fields.
Most of the hummingbirds have deserted us, and even the cicadas seem to have given up (as has our lawn). But the heat hasn't seemed to slow down the parade of animals past Casa de Fire Ant and into our traps.
Here's the latest tally, as of this morning (this is a cumulative total dating back to August, 2017, when we moved into the house):

I updated the totals to account for the possum that wandered into the cat food-baited trap. The possum count is a bit misleading. Since I don't relocate possums, it's likely (probable) I'm trapping the same one over and over. They don't seem to be the sharpest knives in the critter drawer, although MLB has a different take. As she puts it, "they get a free meal inside a safe enclosure, and get released after a few hours so they can do it again that night; what's not to like?" I can't really argue with that logic.
But, they're still stupid. Even after I open the trap, it takes an average of an hour before they figure out they're free to leave. 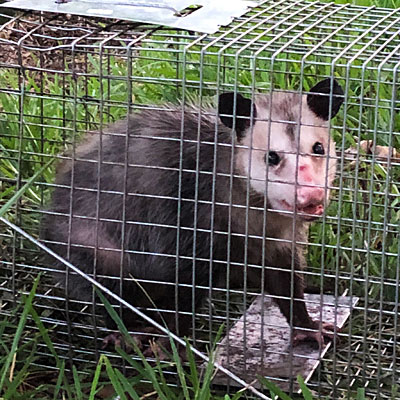 This morning's possum awaiting his MENSA invitation
However, in an overabundance of fairness, I'll give it the benefit of a doubt and assume that it's being cautious, given one of its fellow mammals that's continued to lurk in our neighborhood.

Yep, the bobcat is back. The above series of photos was taken a couple of nights ago, and this marks the third appearance -- that I've been able to capture on camera -- in about a month. These frames give a little better idea of the size of the cat. The cage in the foreground is 32" long and 13" tall.
Of course, possums and bobcats aren't the only visitors. Up until a couple of days ago, I was catching a raccoon every night. That action is no longer newsworthy...until something unexpected shows up. Take a look at this 30-second video:
The raccoon had been in the trap a while before the fox wandered up and took notice of the caged critter. If you watch closely, you'll see the fox bark at the raccoon (who doesn't seem to be the least bit exercised by the fox's presence, or apparent threats).
I can't help wondering if the fox has tangled with a raccoon in the past, given its unwillingness to get too close. My guess is that a raccoon can more than hold its own in a battle with a fox. They're smart and probably fight dirty.
As far as the fox's bark goes, while the game camera doesn't capture audio, I was able to find an accurate rendering of the animal's vocalizations. Based on this, it's easy to come to the conclusion that carrying rabies isn't the worst characteristic of the fox.
Please accept my apologies for resurrecting this...music. I blame the heat.
Be the 1st to Comment
« July 2019 | Main Index | Archives | September 2019 »
Search the Gazette:

This page is an archive of entries from August 2019 listed from newest to oldest.

July 2019 is the previous archive.

September 2019 is the next archive.