Alert Gazette readers may recall this post, in which I chronicle one of the most dramatic nature-related encounters we've had the privilege to witness since moving to the Texas Hill Country. I think it's worth your time to check it, but if you have better things to do -- Game 1 of the World Series is underway, after all -- the article details the predation of a woodpeckers' nest by rat snakes in a tree across the street from our house. The action took place in the summer of 2018.
That tree was riddled with holes that were perfect for habitation by woodpeckers and squirrels, but which were probably also symptomatic of a less than healthy organism. Sure enough, we awoke on Monday morning to find* that the storm that moved quickly through our neighborhood during the early morning hours took a dramatic toll. 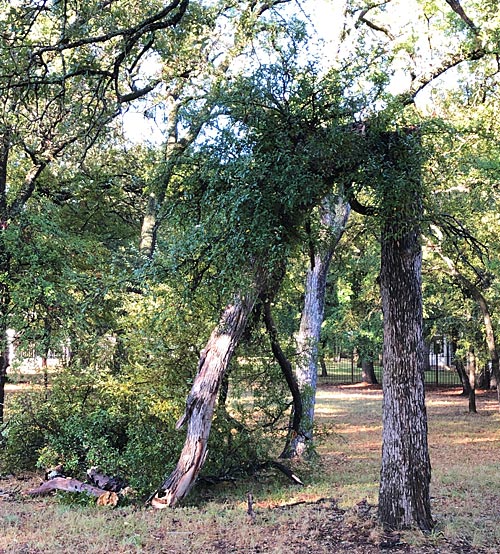 The tree was standing -- and falling -- in a vacant lot, so nothing else was damaged (and there were no other trees in the neighborhood damaged by the storm). I found it interesting that the top half of the tree was leafed out and seemingly healthy, but the bottom half -- the foundation -- was obviously faulty and insufficient to maintain the integrity of the structure. (Gee, that almost sounds Biblical, doesn't it?)
My West Texas heritage causes me to mourn the loss of any tree, but this one has a sordid past and I doubt I'll miss it not having a future. I suspect the local woodpeckers will agree. And the snakes won't care, seeing as how they're snakes.
*MLB and I actually walked past the fallen tree and never noticed it until about an hour later. In our defense, we had just finished a run and were more focused on getting home before we collapsed than on the presence of an already collapsed tree.
Be the 1st to Comment

In yesterday's post, I described my uneasy efforts to release a skunk from a trap. During that process, I kept reminding myself to not get complacent; just because I'd never been sprayed, I shouldn't think it couldn't happen. It didn't, and even though I eventually had to agitate the animal a bit to get it to leave, it never made any threatening motions.
In fact, in my experience -- admittedly limited and YMMV -- skunks are pretty chill. And when you think about it, there's good reason: their defense mechanism is probably one of the most effective on the planet, and humans aren't the only ones to recognize that fact. Case in point is the following video originating from Canada, in which a cougar (the mountain lion kind, not the older-woman-predator kind) discovers that his threat pales alongside a skunk's.
One suspects that the cougar has learned about the skunk's odoriferous emanations the hard way, although that begs the question of whether cougars are really so stupid as to think that another encounter would yield a different outcome. Or, maybe, it was just that hungry.
Anyway, the apparent lesson for us less-stinky humans is that when we need a boost in self-confidence, we simply need to picture ourselves as skunks. [insert political figure joke here]
Be the 1st to Comment

Forget catnaps; it's skunknaps we really have to worry about

Update (10/11/19): The events described below reminded me that skunks are probably the most confident mammals on the planet. Here's some visual evidence of that premise.
'Cause what'cha gonna do with a cowboy
When that old rooster crows at dawn
When he's lyin' there instead of getttin' out of bed
And puttin' on his boots and gettin' gone
What you gonna do when he says honey
I've got half a mind to stay
What'cha gonna do with a cowboy
When he don't saddle up and ride away
Last night was a perfect storm of terribleness from a trapping perspective. I awoke to find both armadillo traps half sprung, indicating that they either malfunctioned when an animal entered and/or a trapped armadillo managed to extricate itself (the latter has happened before, as I've grudgingly shared).
It was bad enough that one or more armadillos eluded capture and continued to ravage our lawn, but I peered over the fence and found that instead of the usual raccoon...it was one of those black-and-white-striped kitties, aka una mofeta, aka a skunk. Great. Just. Great. 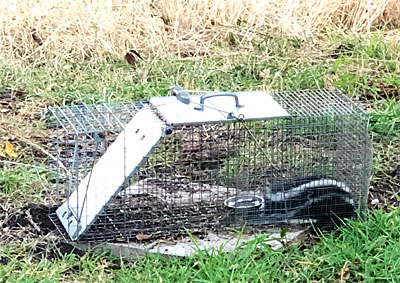 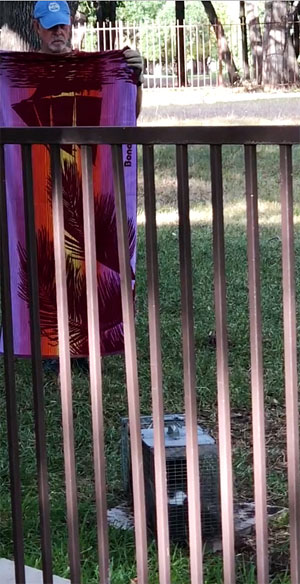 Of course, this isn't my first skunk rodeo [see here and here and *sigh* here; there was actually a fourth one that I didn't even bother to disclose], but it's been almost a year and 33 raccoons since one managed to get itself incarcerated.
I was in no real hurry to deal with it, and it was curling up for a nap as is the norm for skunks around daybreak, so MLB and I went for a run and I tried to remember the correct sequence of events that yield an untrapped skunk and an unsprayed trapper.
At one point during the run, we briefly discuss the idea of calling the city animal services folks and letting them deal with it, but I decided against that since our lawn guys were due this morning and I wanted the skunk gone before they arrived.
So, upon our return I armed myself with an old beach towel and an utterly inappropriate feeling of confidence and began the methodical process of (1) covering the trap, (2) opening the trap, and (3) preparing to run like the wind (or at least a vigorous amble) when the skunk sprang from its prison.
Steps (1) and (2) went off in a rather boring -- for you readers, at least -- fashion. Step (3)? Not so much. As it turned out, el señor mofeta was rather content in his now-darkened bedroom. And, after all, it was past his bedtime. In other word, he wasn't coming out.
And he didn't.
And he didn't. 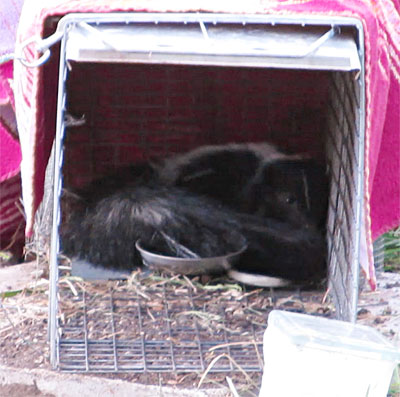 An hour later, the trap was still open and he was still snoozing inside it. Our lawn service hadn't shown up, but I figured they would at any time, so I took a more aggressive stance against the snoozing varmint.
I have a tree limb pruner mounted on an extendable pole, and I figured I could at least uncover the cage from a [hopefully] safe distance using it. It worked very well, in fact, and now the skunk had a little window in the side of the trap from which to look before returning to its nap. Really?
I began gently rocking the cage by pushing the pole against it. That did result in the skunk getting to its feet and sleepily assessing the situation. But it still didn't seem interested in leaving.
I finally jiggled the cage a bit more aggressively, and after almost three hours the skunk warily exited the trap and wandered slowly toward the creek (and away from me, so I didn't have to put my own escape plan into action). 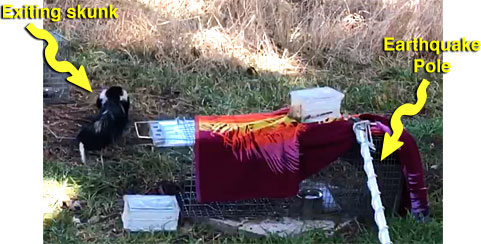 After a lengthy consultation with myself, I think I'll put the trapping endeavors on hold for a while. Lawns are overrated anyway.
For purposes of maintaining the Very Important Accurate Historical Record, here's the scorecard as of today. Please study carefully; there will be a quiz later.

"So," I'm sure you're thinking, "what's with the 'poetry' at the top of the page?" Well, I'm glad you asked. Those are the lyrics of the chorus from a song entitled Whatcha Gonna Do With A Cowboy, performed [YouTube it if you wish] by the late Chris LeDoux and the very much still with us Garth Brooks. I thought the lyrics were appropriate for this topic if you substitute "skunk" for "cowboy" and ignore all the other cowboy references and, you know, it all sounded a lot better in my head. But, then, so do most of my posts.
Be the 1st to Comment
« September 2019 | Main Index | Archives | November 2019 »
Search the Gazette:

This page is an archive of entries from October 2019 listed from newest to oldest.

September 2019 is the previous archive.

November 2019 is the next archive.