I can't remember the last time I posted something to the Random Thursday category. Fortunately, my archivist is on top of things and tells me that it's been (a) almost six months since I wrote a Random Thursday article, and (b) more than two years since I actually posted a Random Thursday thing on an actual Thursday. I trust you're sufficiently impressed with the efficiency of the Gazette's back-office staff (even if it only serves to highlight the inadequacy of its actual blogging staff).

Today is yet another dreary, drizzly, depressingly dour day...the 87th consecutive one, or so it seems. But for one brief shining (literally) moment yesterday afternoon, the clouds in the western sky lifted, and a solar-powered spotlight illuminated the oak trees across the creek. MLB was the first to notice and draw it to my attention, whereupon I snapped a photo with my phone through one of our living room windows.
I was going for a simple scenery picture, but as I took the picture I noticed a large white bird flapping its way into the frame. It was a great egret, and it landed in the creek and immediately began fishing for its supper. Its appearance add some visual interest to the photo, as shown below. 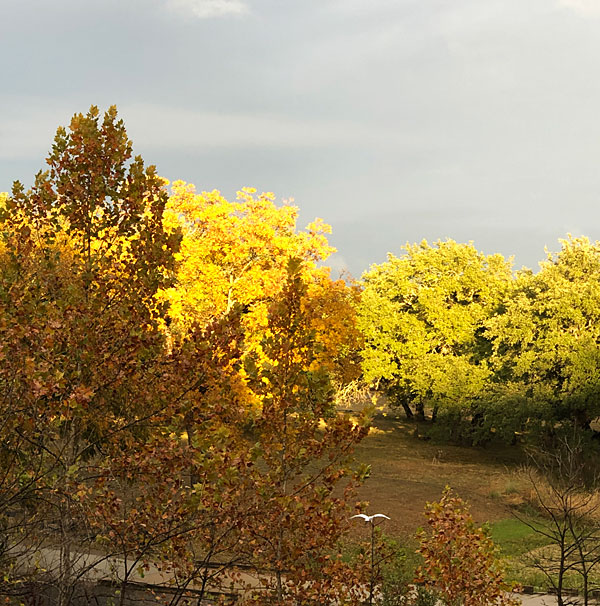 However, what I didn't notice until later was another animal in the photo. It's hard to spot in the above image, but you might be able to discern it if you look closely. Hint: Look in the open area.
By the way, while I'm pretty sure the bird is a great egret, there's enough general confusion about whether a given bird is an egret, or a heron, or a crane that someone (the National Wildlife Foundation) has gone to the trouble of creating a page to address this very important identification issue. The key takeaway from this page for me is that egrets are actually a type of heron, which I never knew.

Speaking of archives (you're still with me, right?), I've been going through some old posts - dating back to 2002, when I first fired up the Gazette - as part of a Top Secret Project which may or may not come to light in the near future.
In going through those archives, I was struck by a couple of things. First, I wrote some pretty cringeworthy things, which at the time I was sure were quite insightful and wise, but which I now realize only elicited the kind of condescending sympathy from readers that one usually reserves for kindly old dementia patients.
But, more striking was the amount of interaction that bloggers and non-blogging readers had with one another, back in the Golden Age of Blogging (which I define as the early-to-mid Oughts). As I've lamented on other occasions, Facebook and other social media outlets have supplanted those kinds of interactions, and while they're not necessarily worse, they're not the same, and some of us just can't abide change. I think there was a lot more "iron sharpening iron" in the comment sections of many blogs than I've seen nowadays in the aforementioned social media. Eh...it is what it is and there's no going back, but I reserve the right to be nostalgic about the good ol' days.
I also appreciate more than ever some of you who are reading this and who have dropped by, even if sporadically, pretty much since the beginning. You know who you are.

I had planned to close with a video of a possum that was strolling blithely past our sliding glass door yesterday, shortly after I took the photo at the top of the page. However, in my haste to get a video with my phone, I failed to notice that when I touched the "record" button, nothing happened, so when I hit the "stop" button after the possum exited the premises, I captured eight seconds of our deck and my foot.
But, not to worry. There's plenty of possum faces to go around. 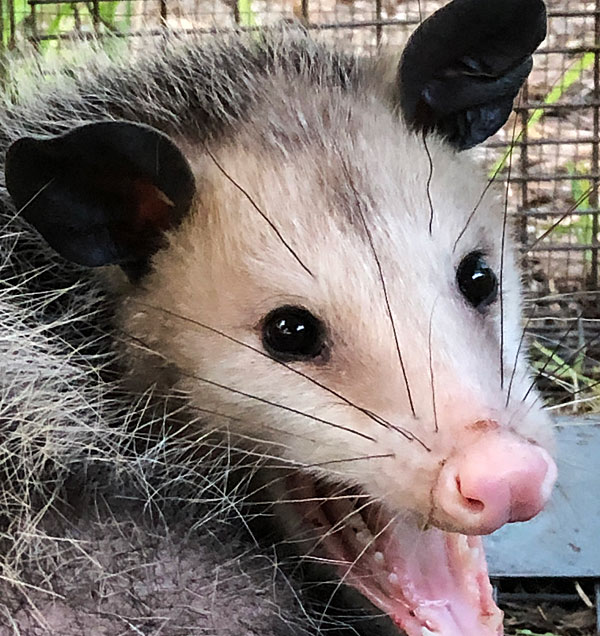 Eric
I really enjoy your writing and dry? humor. You crack me up sometimes. The egret photo looks like a fine painting and I do see what seems to be a small deer. I’m going to my sister, Beth, and BIL’s ranch in Ozona for Thanksgiving along my 2 kids and and littles. We always see so many interesting living and non living things when we are there. Often makes me sad my little grandsons are growing up in an urban area. Tell your bride I said Hello. A Fire ant enthusiast,
Sherry Laurence

This is hard to type on my phone because of the width so excuse the mess. Ha

Hi, Sherry...it's great to hear from you (especially when you come with such kind words)! You're right about the deer in the photo. In a larger version, it almost looks like it's staring either at the bird or at me.

MLB says hi back. Hope you all are doing well. If you're ever in Horseshoe Bay, give us a holler; we'd love to see you!

NoMoNaNoWriMo (not that there ever was any) was the previous entry in this blog.

Random Thursday: The Friday Edition is the next entry in this blog.