I pulled this bad boy out of the closet earlier today: 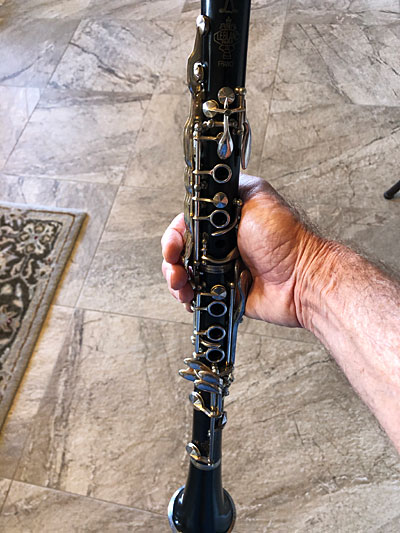 This is noteworthy, at least to me, since it's been approximately thirty years -- THREE DECADES! -- since I made an attempt at playing a clarinet.
I was pleasantly surprised that none of the pads had fallen out, all the cork was still intact, and I spotted only one insignificant crack in the wood thanks to years in the dry West Texas climate and lack of regular oiling.
I miss making music. I began playing the clarinet in junior high, and by the time I was a senior in high school I had gotten pretty good. I don't have any natural musical ability, but I didn't mind practicing and I did a lot of it. Amazing how that can work out, right?
I played a little in college as well, at least for the first couple of years. But I lost the ambition somewhere along the way, and stowed the instrument. I never completely forgot it, though.
Ten or fifteen years later, I was presented with a guitar...one strung to accommodate my left-handedness...and I noodled around on it for a while. I finally admitted the futility of teaching myself to play, and I didn't have the energy to look for a teacher who took southpaw students. Plus, chords are HARD...at least for a clarinetist.
I still had the unsatisfied-if-suppressed urge to make some music. So, today, with MLB out of the house and me confined to it with a mild cold, I opened the case and assembled the instrument while sucking on the reed in an attempt to bring it back to life.
I ran my fingers up and down the keys and I have to tell you that they didn't feel as if I'd been gone for thirty years. I guess when you do something for a few thousand hours, the brain and nerves and muscles still retain some of that learned ability.
Making actual music come out of the instrument was a whole other thing, though. Any wind instrument player will attest to the fact that the muscles involved in the creation of a workable embouchure do not automagically stay fit. It's no different than trying to run a marathon after 30 years of sitting at a desk; the results are guaranteed to be painful. After about ten minutes, I was close to being a drooling slob. (Well, more so than usual.)
But...!
I was able to coax some actual clarinet-sounding stuff out of the instrument, and even more remarkable, I could match the notes on a page (or in my head) with the proper placement of fingers on the keys. I grabbed a couple of books of music -- a Baptist hymnal for tunes and a book of practice exercises for, well, practice -- and even if every tenth note or so was a squeak or a squawk (legit technical musical terms), I exceeded my admittedly low expectations for skill.
Anyone unfortunate enough to have been within earshot would be forgiven for thinking this was a hopeless endeavor, but for me, it was just successful enough to give me motivation to start practicing more regularly. I figure that if I did it once, I can do it again.
Y'all might want to pray for MLB, though.
Posted on February 22, 2020 4:35 PM | 2 Comments

Welcome back to the music-making side of life.

Well, let's give it a while before we actually refer to the sounds I'm generating as "music."

A Baker's Dozen of Instagram Images was the previous entry in this blog.