These are strange times we're living in, and in recognition of that fact, the Gazette is relaxing its rule against publishing material that might be considered thoughtful and relevant. We apologize in advance. 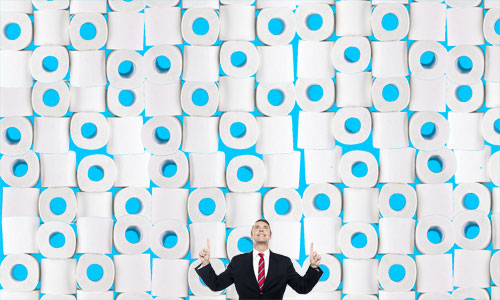 Toilet paper not to scale. Or, maybe the man isn't. It's not important.
We're seeing reports that several of the major grocery chains and big box stores are publishing lists of items that they will no longer accept as returns. This includes non-food items such as toilet paper, hand sanitizer, laundry detergent, and analgesic medications. It also includes frozen foods and other non-perishables.
The "official" explanations I've seen indicate that these steps are "for the safety and health of our customers" but we all suspect what's really behind it: you folks that hoarded stuff and are now finding that you either don't need it or don't have room for it or need the money or see that the supply chain is indeed intact...you folks are just going to have to live with the consequences of your greed (and/or panic).
I don't know. I've been doing a bit of cogitating about the hoarding phenomenon, and there are probably as many different reasons for doing it as there are people doing it. Setting aside the prepper mentality that is an ongoing phenomenon for many and not just a reaction to a minor worldwide pandemic, it seems to me that a lot of regular people are simply ignoring an unspoken social contract wherein we agree, consciously or unconsciously, to be polite and considerate of our fellow Americans. I wonder how these behaviors might change if people were confronted with that proposition?
Then there's this: perhaps some people don't realize they're hoarding. Maybe they just think they're being wise and foresighted. After all, are there any published guidelines as to how much toilet paper is too much? I've never seen anything advising me that I shouldn't have twelve bottles of baby aspirin on hand, or that four gallons of laundry detergent for our household of two adults is, well, three gallons too much.
So, if no one else is going to propose some concrete guidelines, I'm willing to step up and take a swing at it. (Please keep in mind that little word "might" below; I don't know anyone's specific situation and there might actually be a household that needs 20 rolls of paper towels per person at any given time. But most of us don't.)
You might be a hoarder if you're buying...
These are admittedly subjective guidelines that may not stand the test of group scrutiny. Feel free to suggest alternate approaches, or add to the list of items based on what you've seen on your shopping excursions. Just keep in mind that the major retailers seem to be assuring us that the supply chain for most, if not all, of these items is intact and working properly and the issue is not supply but an unreasonable demand.
Regardless, folks, let's agree to just be nicer to each other, okay?
Posted on March 22, 2020 5:04 PM | 2 Comments

Hello Eric. The problem with what you are suggesting is that we have raised a generation of individual who do not give a damn about others. I see this everyday, even in my younger relatives. Everything is "it's all about me" mentality. There are some good ones out there, but the majority are so self centered as to make sharing improbable. Enjoying retirement? Kay and I are. Like living with trees, rain, and no wind.

I hate to generalize about entire generations. You're no doubt right about some of them, but we see the same behavior in this area where the demographic skews significantly to people our age or older.

Yes, retirement is definitely an agreeable state of being. And we certainly don't miss very much about West Texas, other than some of the people. I'm really glad we're not in Midland right now; it's a depressing place to live when oil prices collapse.

Thanks for stopping by! Give Kay a hug for us.

Random Thursday: The Tuesday Edition was the previous entry in this blog.

A minor diversion... is the next entry in this blog.