Armadillos R Us: A Trapping Update

Update (4/2/2020): Add one more to the armadillo count below; another one became an involuntary guest early this morning. And, yes, succeeded in waking me up at 3:30 a.m. in the process.
People have been clamoring* for a trapping update from Casa Fire Ant, and I respond to nothing if not clamoring. Here's a snapshot to set the mood:

Note that the T-rex count remains depressingly low
To be quite honest (vs. the not-quite honest we're best known for), we've stopped trying to trap anything but armadillos. We decided that we were basically serving as the raccoon equivalent of a Golden Corral and minor details such as illegality of transport and frequency of rabies in those raccoonish diners, plus the collateral issues of catching skunks, possums, and house cats led us to rethink our strategy. The raccoons continue to stroll past our domicile each night, but as far as we can tell, they're not doing any damage, so we'll peg our tally at just over half a hundred and focus on the truly annoying culprits, aka Dasypus novemcinctus, aka the state mammal of the United Nation of Texas, aka the nine-banded armadillo.
We've caught four of them over the past ten days, including two in the early hours of Tuesday morning. Pro tip: don't set your traps close to your bedroom windows unless you don't mind being awakened at 3:00 a.m. by armadillos banging around seeking to break their surly bonds. Seriously, it's a real thing.

Apart from the obvious benefit of ridding ourselves of lawn-destroying varmints, armadillo trapping this time of year provides excellent photo opportunities. The UARL (undisclosed armadillo releasing location) has some nice stands of bluebonnets interspersed with miscellaneous other wildflowers, and what could possibly make for a more iconic Texas photograph than the state mammal frolicking** amongst the state flower? So, accompanied by my adroit cameraperson, aka MLB, we carefully staged some wildlife release scenes.
If you watch carefully the gif above, you'll see that the armadillo gets a rather slow start out of the gate, but quickly picks up speed. He also shows off his hopping skills a couple of times. Armadillos are surprisingly quick and also surprisingly adept at jumping, which is one of their go-to defensive maneuvers when evading predators (and trappers).
They're also quite -- how can I put this delicately? -- stinky. The traps I use are wooden and "pre-scented," meaning that they've housed actual armadillos before being shipped to the buyer. The animals have terrible eyesight but an out-of-this-world sense of smell, and they willingly enter traps that smell like their brethren have gone before them. The odor in the traps will eventually dissipate in the rain and hot sun, but it only takes a couple of hours for an armadillo to "re-arm" the trap. 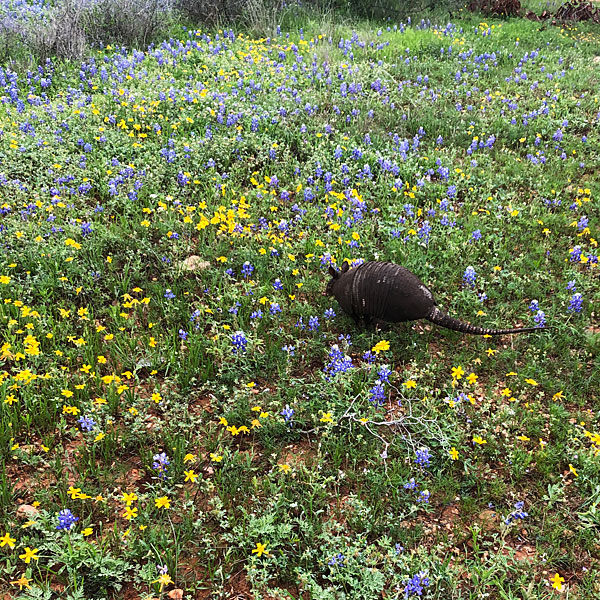 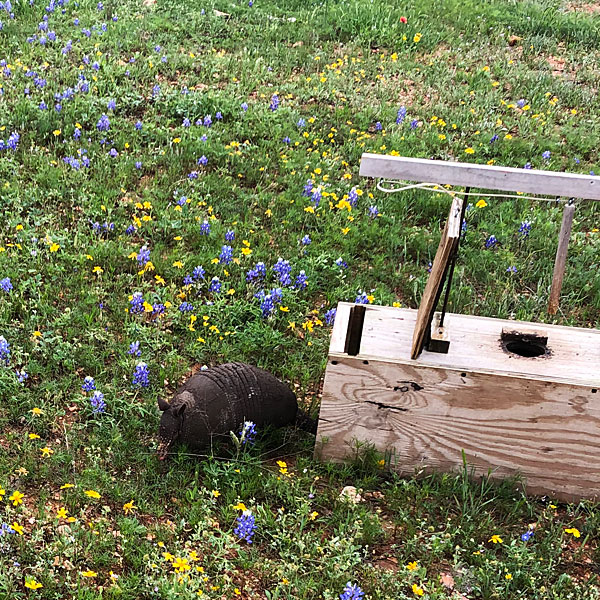 The photo immediately preceding shows one of the armadillos exiting the trap. I used to have to turn the trap vertically and shake it to make the critter depart (it's not that they like it in there, but they apparently don't like being told what to do), but I've learned that opening the end of the trap opposite from the way they're facing and simply touching their tails makes them immediately vacate the premises. I get it; I don't want anyone sneaking up behind me and touching my tail either. 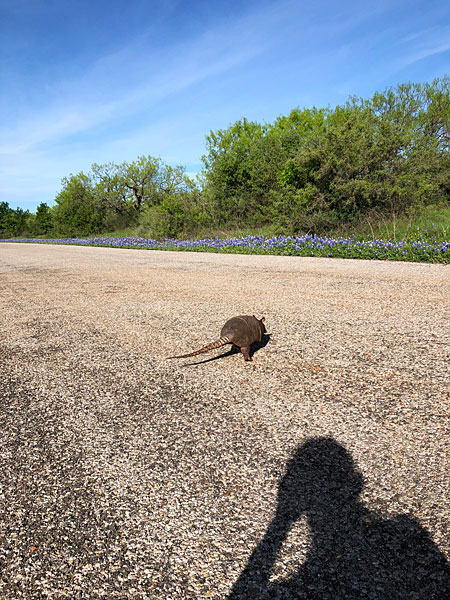 So, we bid adieu to our little scaly friend, both of us hoping never to meet again. And lest you worry, we make always make sure they're safely across the road (which is rarely traveled anyway) before leaving. At least he gets to smell the wildflowers; we get to smell him.
*I don't actually hear any clamoring, but silent clamoring is the best kind.

**It's more like running for your life, probably. I'm not at all sure that armadillos are prone to frolicking. But they definitely engage in shenanigans, if not downright hijinks.
Posted on April 1, 2020 8:09 PM | No Comments

Springtime in the Hill Country (Pictures!) was the previous entry in this blog.

A Minor Diversion, Part 2 is the next entry in this blog.