Re: the post title -- pardon my French. Except in this case, "frass" is actually German.
As long as we're on the subject of disgusting worm-related phenomenon, lately we've been dealing with an infestation of walnut caterpillars on our pecan trees. It's bad enough that they're not abiding by their names -- no one in their right mind would mistake a pecan for a walnut -- but they're also using our back yard as an outhouse. Just look at this photo: 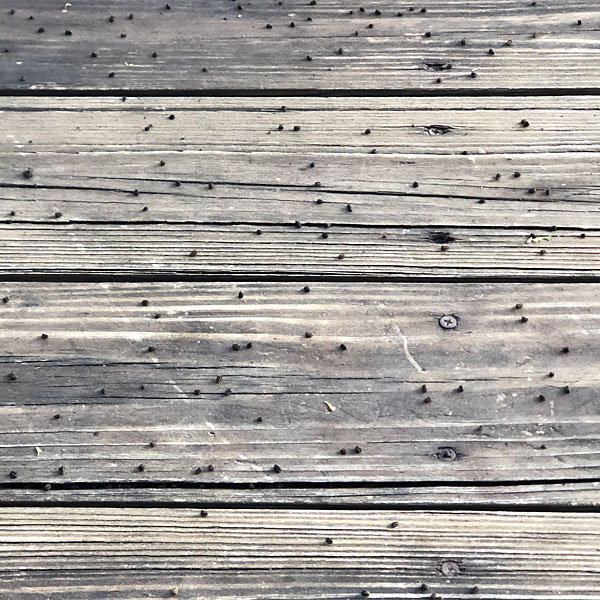 That's horrible, isn't it. No, wait...I'm not talking about the condition of the deck, which is in obvious need of refinishing. I'm referring to those black specks, which are caterpillar frass, aka castings, aka poop. The caterpillars in our trees are producing generating prolific quantities of frass, to the point where we (and by "we" I obviously mean "Debbie") are having to sweep off the deck several times daily.
You're probably familiar with the book Everyone Poops, and that's obviously true even for insects in most stages of their life cycles. I accept this as a perfectly natural phenomenon, no different than the exhalation of CO2 by mammals during breathing or the squishing of bodily fluids when one steps on a walnut caterpillar who has the poor judgment to temporarily cease pooping and venture down from the tree.
And it's not as though caterpillar excrement has no redeeming qualities. In fact, it (and all of its insect cousins' output) is high in nutrient value for your gardening enterprise. Unsurprisingly, you can buy bags of bug poo from Amazon. I don't want to know the details of how someone manages to fill a bag. (That link leads to a product that is described as containing exudate matter of black fly larvae. So, so dignified, especially if you hear it spoken with a British accent.)
Pestiferous as the prodigious poop production may be, it's more frustrating that we can't spot the exudate actors. The caterpillars are seemingly camouflage experts because we have yet to spot one in the trees.
As with most of these natural phenomena, this too shall pass. In the meantime, while How To Train Your Dragon may be more entertaining, I'd really like for someone to produce How To Housebreak Your Caterpillar. And I'd like to be able to go out on our deck without an umbrella. 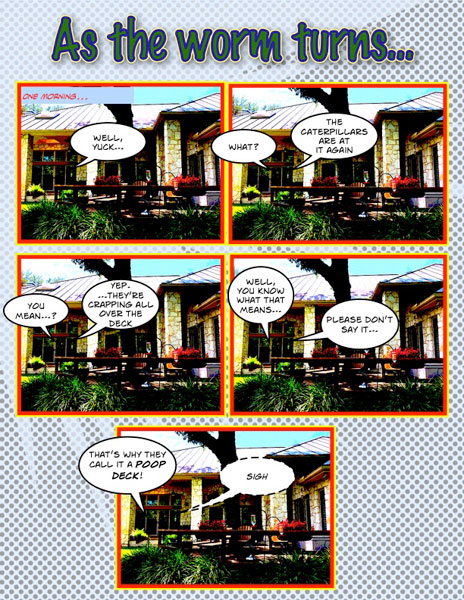 Central Texas Flatworms was the previous entry in this blog.

Checking in on the hawk family is the next entry in this blog.