Checking in on the hawk family

It's been about six weeks since I discovered the active red-shouldered hawk nest in a live oak tree adjacent to our property. At that time, the female raptor appeared to be spending her time incubating eggs, an assumption that was confirmed a few weeks later.
Up until now, I've had to rely on my drone to get photos and video of the occupants of the nest, but the young birds have grown to the point where I can observe and photograph them from a couple of spots on the ground (and only a couple -- the hawks were quite expert in hiding their nest from casual observation, about 40' above the ground). I use a Canon 70-200mm zoom lens, and it's just barely good enough to allow my ancient 8mp DSLR to get some decent pictures. Fortunately, the three nestlings-almost-fledglings are pretty photogenic. 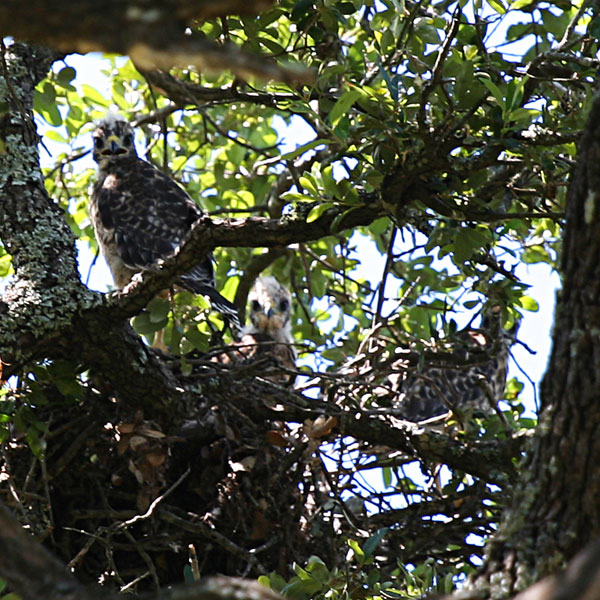 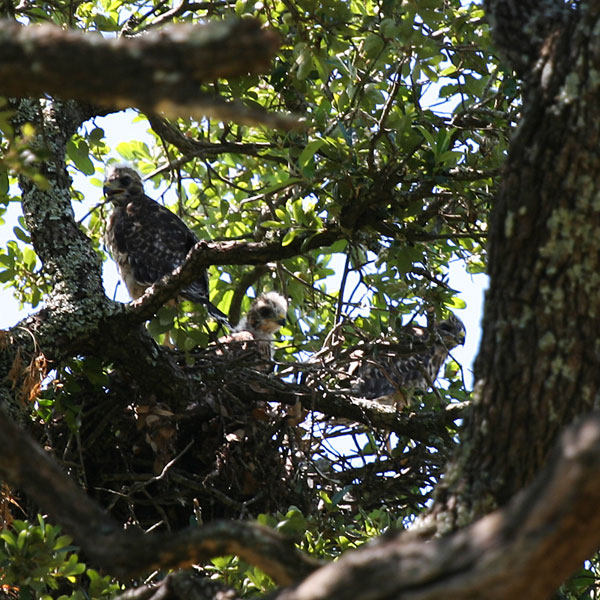 If you're wondering, as I was, why one of the birds seems to be a bit behind the other two in terms of development, I've learned that the eggs don't hatch simultaneously; in more technical terminology, they hatch asynchronously. So, the bird in the middle obviously hatched later than the other two.
My uneducated guess is that these birds will be leaving the nest over the next couple of weeks. I'm looking forward to the possibility of observing the next chapter of their avian lives, and I hope to be able to share some of that with you.
By the way, if you're new to bird watching, here's a quick primer on the differences between nestlings and fledglings.
And this is an excellent and thorough reference site for red-shouldered hawks, although it seems to overlook the possibility of the species dwelling in Texas.
Posted on June 5, 2020 1:07 PM | 2 Comments

Eric
Thank you for Sharing your bird knowledge and photos. Pecan Creek is very blessed by you and Debbie living here and sharing all of the Wildlife we have living with us. Have you captured and of the newborn fawns? There was one by the Clubhouse this morning
Sandy&Gary

Thanks, Sandy. Since we're new to the Hill Country, we've had a blast getting acquainted with the flora and fauna of the region. It's all quite different from what we had in the desert and plains of West Texas!

We haven't run across any fawns this year. I've heard a lot of reports, but we've seen only one and that was a year ago.

Frickin' Frass was the previous entry in this blog.

Leaving the Nest...Literally is the next entry in this blog.