It's been a while since I posted anything about our varmint trapping endeavors at Casa Fire Ant, and although nothing of great significance has happened over the past few months, we have achieved a minor milestone: our 64th armadillo capture since we moved in about three years ago (wow...time does indeed fly).
"Why," you may ask, "is this a milestone?" Well, the answer should be obvious: it's the only way I could think of to use the lyrical reference atop this post. Even that's a stretch, because (a) we don't trap armadillos by feeding them, and (2) we certainly don't NEED them, except as subjects for a tedious series of articles.
It is worth noting, however -- if only for purposes of maintaining a reliable historical record -- that armadillos have figuratively left all the other species in the dust in terms of the numbers wandering into our traps. Here's the latest iteration of our classy trap status graphic:

The raccoon count has hasn't budged since last year. This phenomenon is closely related to the fact that I've put those traps in the attic which remains blessedly raccoon-free. Seriously, though, now that we've stopped putting out food in the traps, the raccoons have stopped coming. Who could have foreseen that?
Also, the T-rex count remains disappointingly low. I have no good explanation for that.
I thought it would be interesting to see how the armadillo trapping has progressed over time, so I wasted invested an inordinate amount of time on the animation shown above. Be sure to watch it over and over so that my ROI is enhanced.
At some point, one would think that I've surely decimated the local armadillo population. Granted, the females always give birth to quadruplets, so keeping up with the birthrate will be a never-ending challenge. But I also have a sneaking suspicion that I'm not only trapping neighborhood animals, but also those arriving via involuntary relocation. As in, other people are bringing their trapped armadillos into our neighborhood and releasing them. We are surrounding by semi-woodsy, uninhabited terrain, and a sufficiently sneaky person could easily dump an animal without being seen. And since we back up to a creek, the armadillos would logically head toward our location. This scenario makes sense to me, because I used to do the same thing early on, before I realized the implications.
But, since armadillos don't typically carry IDs, I have no way of proving anything. We'll just continue our program of catch and release (the latter now taking place miles away in a totally uninhabited part of the county) and occasionally bore you with updates. It's not as though I have anything better to do. 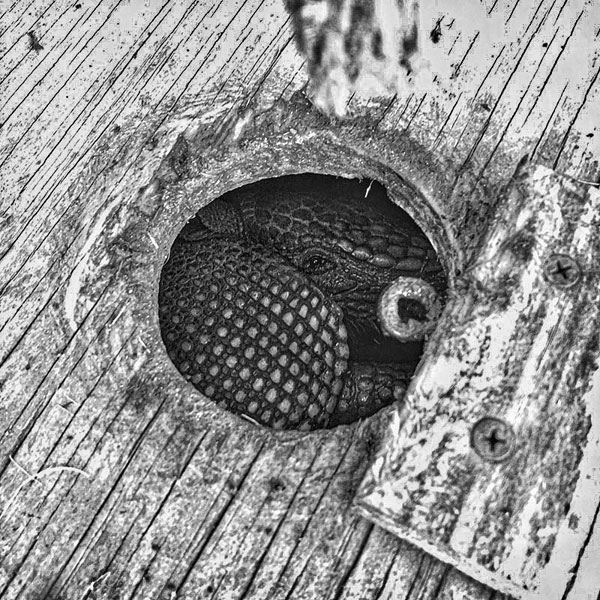 "Agricultural Tragic" - Another Bullseye from Corb Lund was the previous entry in this blog.

A Fire Ant Gazette mask? Why not? 2020 is a disaster anyway. is the next entry in this blog.