Alert Gazette readers will recall that I've previously written about the bobcat that frequents our neighborhood [see here and here]. Both of those reports arose from images captured on my trail camera, all of which were taken at night. I have never seen the bobcat during the day, although certain of our neighbors have reported seeing it in the early morning hours just before or right around sunrise.
That changed last Sunday. Debbie and I had returned home from eating lunch at a restaurant after church and had driven into the countryside a ways to release an armadillo that I trapped overnight (number 77, if you're keeping count). It shortly after 1:00 and I had just returned the trap to its spot in the back yard when a movement across the creek caught my eye.
I initially thought to myself whose pit bull is running loose over there? No one in the neighborhood has a pit bull. The animal disappeared momentarily, hidden by the trees lining the creek, but when it reappeared I instantly recognized it as a bobcat. And, of course, I pulled out my phone and started videoing. 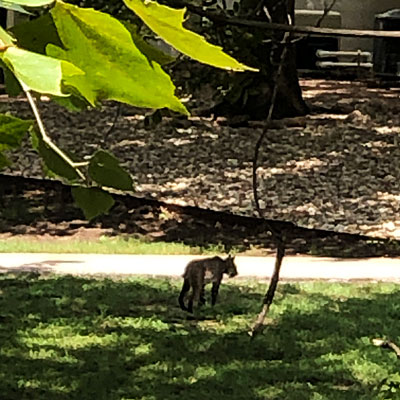 There are no other houses across the creek from our back yard, just a large green space bordered by the walking trail. The nearest structure is our neighborhood amenities center: a workout room, indoor pool, and a meeting room. The cat was meandering toward that structure.
I scurried out of the back yard, through the vacant lot next door, and across the low water crossing, hoping that I was right about the route the bobcat was taking. Sure enough, when I next caught sight of it, it was peering into the workout room. I couldn't see anyone inside through the tinted windows, but the cat was seemingly attracted to something (perhaps its own reflection?). At one point I could hear it yowl.
[And speaking of hearing things, the squirrels and birds in the trees above where the cat was strolling were extremely vocal in expressing their disapproval of its presence. The bobcat, for its part, paid them no heed. I was wishing for a dive-bombing mockingbird to enliven the scene.]
The feline continued its saunter along the perimeter of the building, stopping briefly to paw at a window. It eventually rounded a corner and laid down in the concealing shade of some shrubs.
As this scene unfolded, it occurred to me that I was pretty close to a wild animal not famous for its soft and cuddly nature. It could run faster than me; it could climb better than me; it had sharper teeth and claws than me. All I had was my superior intellect...the same intellect that brought me within spitting distance of a bobcat. So much for superior intellect. At the same time, it wasn't acting strange -- other than wandering around in the middle of the day* -- and other than giving me a glance or two, didn't seem to care about my presence one way or another. I decided I wasn't taking much of a risk after all.
My wildlife observation episode came to an end when a pickup drove by and startled the cat, which hightailed it back toward the creek where it disappeared into the grass. I suspect the bobcat has a den somewhere along the creek bed, and will continue to prowl the neighborhood. My only concern is when a wild animal like this gets too comfortable being in the presence of people, something bad will eventually happen...and it will be the bobcat on the losing end.
Well, anyway. I did splice together some of the video that I took, and you can watch it here in this relatively short (<2 minutes) clip. You can ignore the captions if you like; they pretty much are summaries of what I've written here.
*Bobcats are crepuscular animals, meaning that they're generally most active during the twilight hours -- around dawn and dusk. However, it's not terribly unusual for them to be active during the day, although that is more likely to be the case during the fall and winter months.
Posted on September 15, 2020 3:24 PM | No Comments

The $5,000 Meatloaf was the previous entry in this blog.

Missing the HIPPA Mark is the next entry in this blog.