Pox in the Box -or- Skunk in the Trunk

Apologies for the post title. RhymeZone let me down again.
God gave us ten commandments that are intended to create a pretty good basis for life, but sometimes life calls for something a bit more...specific. Like, say, don't eat yellow snow. Or don't talk about Fight Club. Or, for example, don't squat with your spurs on or bring a flamethrower to a pillow fight. (I might have misunderstood that last one, but it sounds like a good idea anyway.)
I adhere to the aforementioned rules plus countless others, many of which I learned via the consequences of violating them before I knew their importance or relevance. And, recently, I added a new one: don't open an animal trap before you know what's in it.
As you may recall, I keep two armadillo traps in the back yard pretty much year around. Why? Well, I've trapped 82 so far, so the "why" should be obvious.
The traps are basically rectangular wooden boxes with doors that drop down on either end when an animal wanders into them. They have pretty sensitive triggers, so the doors sometimes drop to wind, or because a squirrel got in and then escaped through the small hole in the top where the trigger hangs down. And occasionally a particularly intrepid armadillo will manage to lift one of the doors and escape, and it drops back down afterward. Closed trap doors don't necessarily mean there's an armadillo inside. 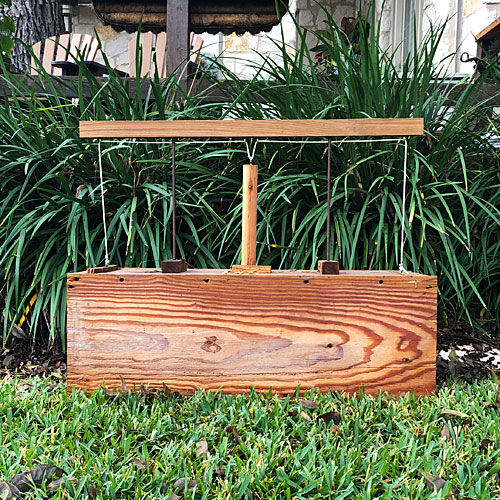 My normal routine is to check them first thing in the morning because it's not nice to leave an animal in a trap for too long. If the doors are down, my usual means of checking for the presence of an armadillo is to lift one end of the trap and listen for an animal sliding around inside (the armadillos are usually asleep by this time). This has proven to be a failsafe method of knowing what my next steps should be: reset the empty trap, or haul the armadillo far away for a safe release.
However, I recently learned that "failsafe" is no longer an applicable adjective.
Last week, I went into the back yard shortly after sunrise and saw that the doors were closed on one of the traps. I started toward it, intending to tip the box to confirm there was an armadillo inside, and as I got closer, a small, dark-colored head popped out of the hole in the top of the trap, and just as quickly disappeared.
"Well, great..." I thought to myself, "...a rock squirrel got inside overnight and can't get out."
Alert Gazette readers will no doubt recall that there's a[t least one] family of rock squirrels living on the creek bank behind our house. You'll also remember that those squirrels are much darker than tree squirrels; their coloring ranges from dark brown to almost black. They're also bigger than tree squirrels so it's not impossible that one could get trapped.
However, as I got closer and the head popped out and back in, I realized that it was not a squirrel at all. See if you can guess what I was dealing with*... 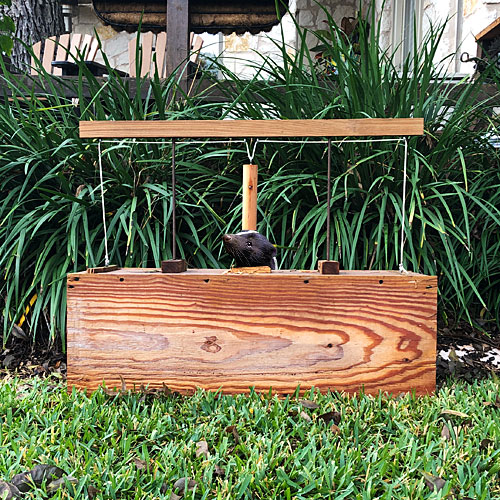 Fortunately, I was wearing my x-ray glasses**, and was able to confirm the identity of the occupant of the box... 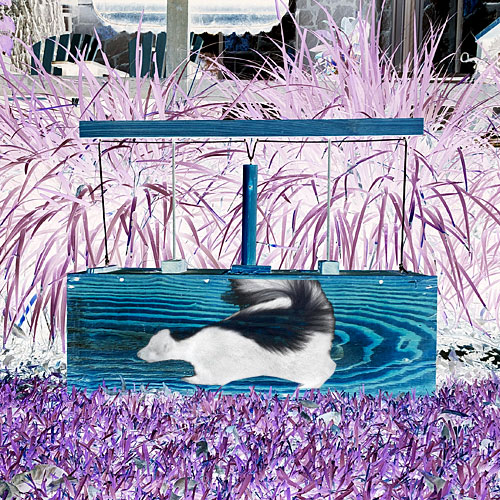 That, mis amigos, is a Mephitis mephitis, aka striped skunk, and it had no business occupying an armadillo trap. Especially since I now had the unenviable task of getting it out.
I tip-toed to the trap and carefully peered through the small hole in the top, and if there was any doubt before about the occupant, it was now gone. 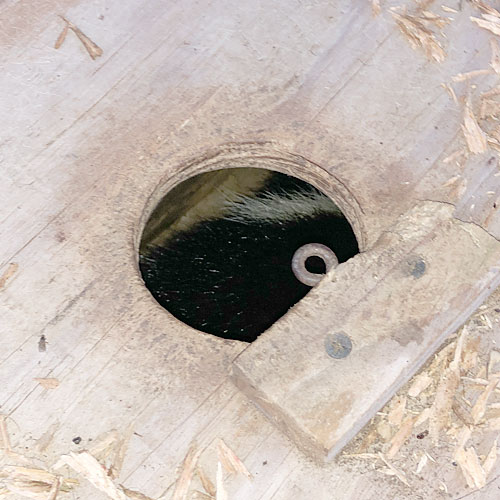 Now, notice the wood shavings on top of the trap (as well as on the skunk's back). It seems that the animal didn't take kindly to being incarcerated and decided to chew its way out. Here's a better view of the damage it was able to do. 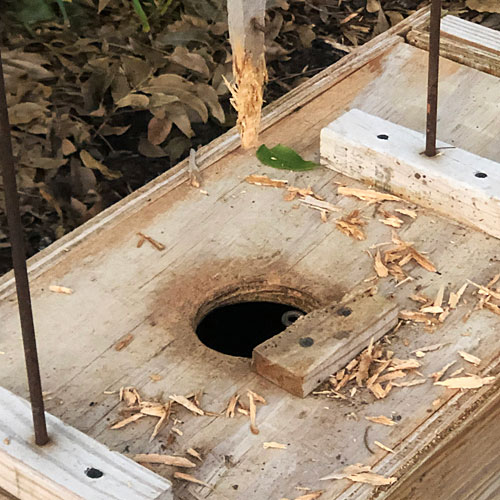 The stick hanging down is the trap's trigger and it should be about six inches longer***. From a biological taxonomy perspective, skunks and beavers have nothing in common except membership in the class Mammalia, but they both seem to know their way around a piece of wood.
Fortunately, releasing a skunk from a wooden armadillo trap is considerably less fraught than getting them out of a wire varmint trap [see here and also here]. Since they can't see you, it's easy to sneak up and gently lift the door on one end of the trap (preferably on the end opposite of where you'll be standing; this should be another rule to add to the list). 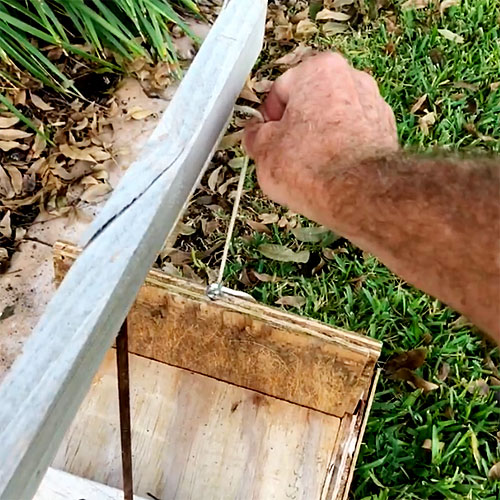 Once the door was opened, I quickly retreated to a safe spot (I hoped) to observe the skunk's exit. It took a few minutes before the animal decided it was safe to leave. (I apologize for the blurry photo; it's actually a screen capture from a video.) 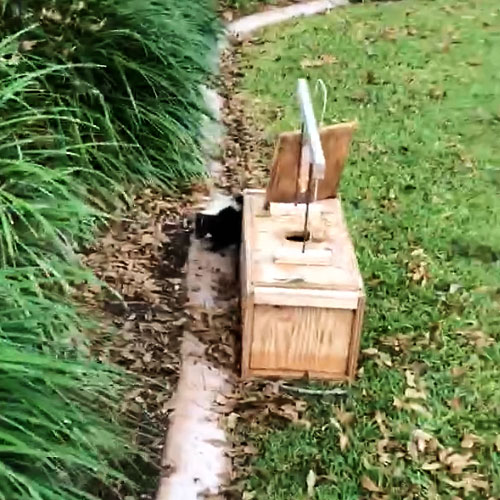 However, the skunk apparently spotted me and -- similar to the groundhog seeing its shadow -- quickly retreated back into the trap. It apparently had no inkling that I was much less a threat to it than it was to me.
I positioned myself on the wooden deck overlooking the trap and tossed a few pecans and sticks down hoping to startle the skunk enough to make it leave, but not enough to make it you-know-what.
That strategy had mixed results, in that it did succeed in making the skunk leave the trap, but it also caused it to head directly under the deck. We've got our fingers crossed that that was a very temporary refuge.
Needless to say, I have a new tactic for checking the contents of an armadillo trap, one that doesn't involve upending it. And this is one rule that's not made to be broken.
But there's still an unanswered question: what would prompt a skunk to enter a dark, non-baited box that smells like armadillo? Was it a sense of adventure, or a state of inebriation, or perhaps a dare from one of its skunk frat brothers? It's a mystery.

* Full disclosure: this is actually a mockup of the protruding skunk head, as I wasn't quick enough with my phone to capture an actual photo. Sorry [not sorry] for fooling you.
**I don't really have x-ray glasses, and I'm still mad about that misleading ad in the back of that March, 1966 edition of Mad Magazine.
***Thanks to the skunk, I had to fashion a new trigger for the trap. The replacement will withstand a beaver assault [famous last words, right?].
Posted on October 31, 2020 10:34 AM | No Comments

Steam Fog on Lake LBJ was the previous entry in this blog.

A Pleasant (and Sometimes Challenging) Interlude on South Padre Island is the next entry in this blog.