Debbie and I have spent the past few weeks repairing the landscape around our house following the devastation of the Great Texas Freeze-Out of 2021. We make a great team; she tells me what to do, and I do it.
So far, we've taken out the following dead, or mostly dead, plants:
We're still waiting to see whether the potted bougainvillea survived in our cheapo greenhouse after the little ceramic heater shut off unbeknownst to us just when we needed it the most.
We also pruned back to the ground more than 20 big liriopes (aka monkey grass)...a process that was mind-numbing and back-breaking. There's never a machete around when you need one.

I spent way too much time making this image,
so please pretend to be impressed.
Speaking of plants that were mostly dead, the four aralias -- which were 5-6 feet tall -- in our front courtyard appeared to be goners, but are already flourishing from the ground, and looking quite content.
We replaced the pittosporum and ligustrum with 7 Lucky Leaf hollies pruned into a "pyramid" shape. The spots where the nandina previously resided are now occupied by Japanese boxwood, plus a quite fetching Crimson Queen Japanese maple tree. We haven't decided what -- if anything -- will go where the palm trees used to be. All of the replacement plants are hardy down to 0º; I hope we never find out if that's accurate.
Now, about that loquat tree...
Of all the plants we lost to the freeze, the loquat was the most distressing. We think the tree was planted by the original owners of our house when it was built twenty years ago. It was around fifteen feet tall, and its wingspan was about the same. Its blooms brought butterflies in the summer, and the fruit was coveted by deer. The thick foliage attracted all manner of birds and lizards, and the squirrels used it as a jumping off point to access the big pecan tree that grows out of our deck. It had survived all kinds of weather, but was no match for the record-breaking cold in February. For what it's worth, we haven't seen a single loquat around the city that survived.
Here's a rather large gif depicting the decline and death of our tree.

It may have taken two decades to grow the tree, but it took us only about four hours to reduce it to its component parts, including some logs that I hope will prove to be good firewood by the time the next polar vortex rolls around.
Of course, once the tree is cut down and the leaves and branches hauled off, there's still the problem of the stump. I thought about hiring someone to dig it up and take it away, but I was curious about what kind of root system it had. My guess that it didn't have a tap root, but instead had a network of lateral roots which didn't extend very far into the ground. If that was the case, it should be a relatively easy task to cut a circle around the stump and pry up the root ball.
I was half right. The root system was indeed shallow. The task was anything but easy. I tried a variety of tools, but finally settled on a pickaxe and a long-handled shovel. It took four hours stretched over two days but we finally broke the large root ball loose. I say "we" because Debbie provided some critical assistance at the end by using some long-handled loppers to snip through the last remaining roots that I couldn't get to with the pickaxe. We finished the job this morning, too late to include in the preceding animation. 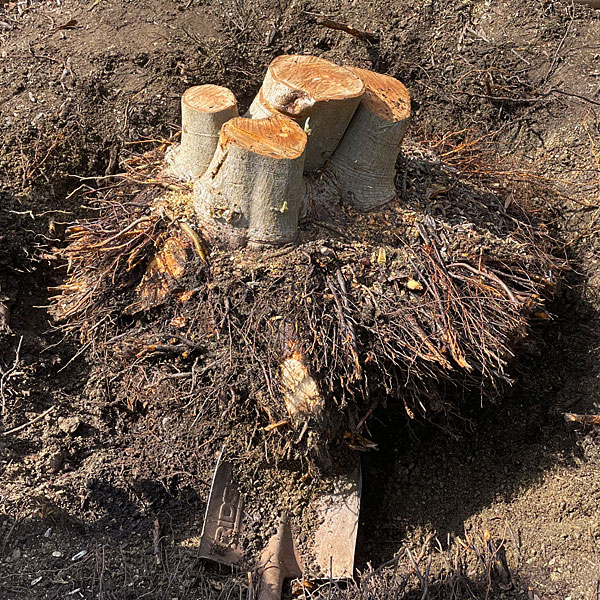 That's about 150 pounds of loquat stump, roots, and embedded soil and rocks. I'm probably going to have to chainsaw it down the middle in order to load it into the pickup for disposal. My chiropractor will finally be able to afford that swimming pool she's been saving up for.
Replacement of the loquat tree is a challenging issue. It provided a rather significant privacy screen for our backyard and even our house, and we're not sure what to replace it with. We have a lot of options, ranging from another tree to multiple tall shrubs. I'm sort of partial to a vitex tree because they're fast-growing, but magnolias and desert willows are also still in the mix.
At the end of the day, we're thankful the damage from the winter storm wasn't worse, and we've actually been able to upgrade some of the landscape that we weren't really thrilled with but lacked motivation to do anything about. We're also thankful that we can afford the cost of replacement plants, and that we have the physical strength to do the work (if not the mental acuity to avoid it).
Posted on April 7, 2021 8:23 PM | No Comments

When Birds Attack was the previous entry in this blog.

As The Worm Dangles is the next entry in this blog.