My Oura ring provided me with the following bit of information this morning: 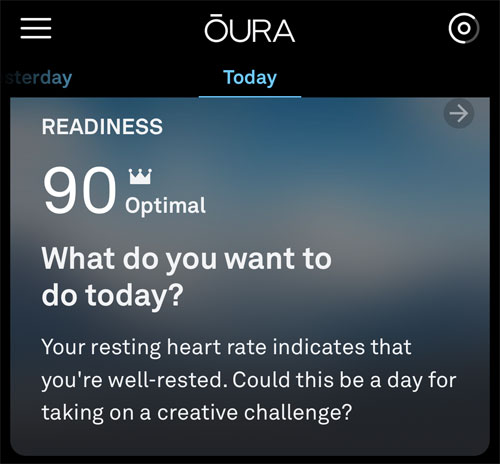 Well.
Of course, my biggest creative challenge on any given day is deciding which white socks to wear, so I wasn't sure what to do with this advice. Then it came to me, sudden-like: "it's Thursday. I should craft a Random Thursday post!"
It's been awhile since I wrote any kind of Random Thursday article (Ed. -- Eleven months, twenty-two days, to be exact), much less one on an actual Thursday. (Ed. -- One year, five months, sixteen days, to be exact) [My editor has apparently discovered the Date Duration Calculator, much to my continuing chagrin.] But it's a dreary, rainy day here in the Bay of Horseshoes, so...why the heck not?

Last Wednesday was Aggie Muster, an annual event where former students of the Best University in the, uh, Universe gather to honor our classmates who passed on in the previous year. It's a pretty solemn occasion, and it was good to be able to do it in person instead of virtually as we had to do last year.
I did something that I had never thought about doing before: I wore my dad's class ring in his memory, alongside mine. 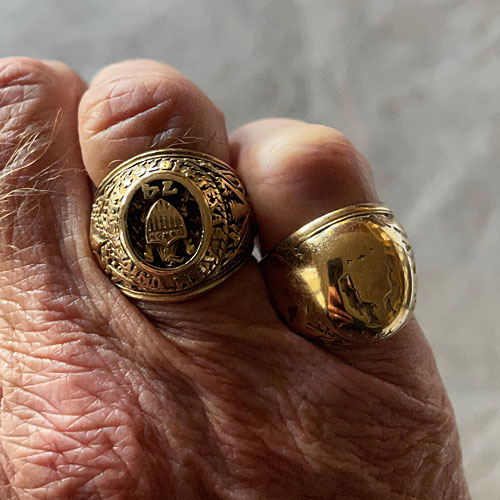 Dad graduated in 1949, 26 years before me. [OK, nice try. You did the math, didn't you, and you think you caught me in either a lie or some Aggie ciphering. Normally, you'd be right, but in this case, the photo is misleading. I actually graduated in 1975, because I loved the heat and humidity of College Station sooooo much. And also because organic chemistry prompted me to change majors. But that's another story for another day.]
As you might guess, Dad wore his Aggie ring continuously until the day he died. In fact, he wore it on the same finger as his wedding ring; the class ring was almost worn through on the bottom from friction with the other band. You might also guess that I don't wear mine nearly as often. It's not a case of not being proud of it...I almost always wear it in public...it's just too big for me to wear comfortably around the house and while working.
Anyway, I felt like it was a pretty good way to honor Dad while attending a ceremony to honors others.

Despite the appropriation of their name for this blog, I have no affection for fire ants. As far as I can tell, their only redeeming quality is that they are said to eat chiggers, and that doesn't come close to offsetting their disturbing tendencies to destroy pretty much everything else they come in contact with. 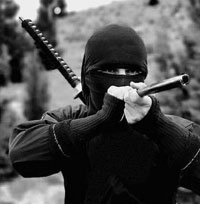 Ninja with a blowgun...the fire ant's worst nightmare
So it was with some interest that I ran across this article on the Entomology Today website that claims that compounds found on the skin of so-called poison dart frogs might be used to control (a euphemism for "destroy," one would hope) fire ants.
Unfortunately, I also noticed that the article was dated 2014, and seven years later, there has been no massive frog skin induced fire ant eradication.
My guess is that once researchers tried to bring this approach into the field, they quickly found that aiming those tiny arrows was just too hard.
I crack myself up, sometimes.

We've recently returned from an enjoyable visit with our friends who live on South Padre Island. There's a lot I could report on, but I'm going to focus on a couple of things.
First, the beach on the Gulf of Mexico side of the island was littered with thousands -- if not hundreds of thousands -- of tiny stranded jellyfish-looking organisms. We thought at first that they were juvenile Portuguese man-of-war (men-of-war?) owing to their coloration and little dorsal sail, but closer inspection revealed that they had none of the strings of tentacles that make that species so gosh-darned nasty.
Debbie did some googling and discovered that they are actually Velella, a hydrozoan (meaning that they are in the same scientific classification as the creatures we call jellyfish; and they are indeed a semi-close relative of the much larger Portuguese MOWs) that also goes by the name of sea raft, purple sail, or by-the-wind sailor (which seems a bit redundant, but which is an actual nautical term). As you can see, the common names are quite appropriate: 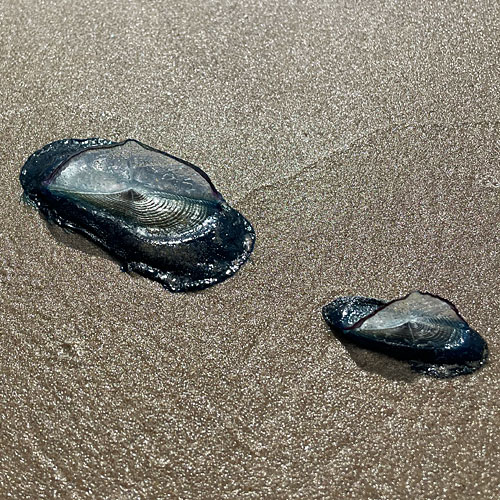 They're really quite pretty when the light catches them at just the right angle, but it's a bit sad to contemplate the multitudes of the little creatures that died because they were washed ashore by the waves and the wind.
[Am I alone in seeing an odd resemblance to some of the glass insulators I wrote about here?] 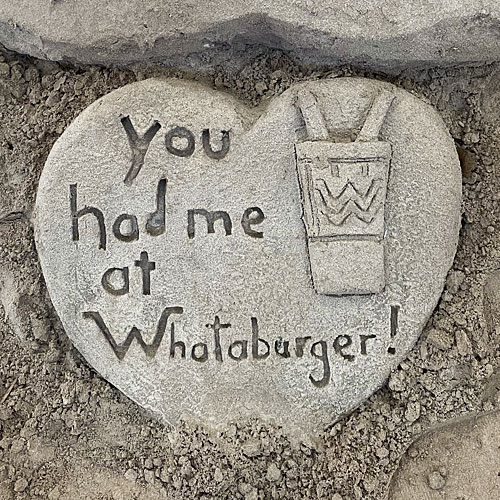 The next photo deserves a bigger viewing area. Check out the details on this sculpture and see how many references to the madness that was 2020 you can spot. 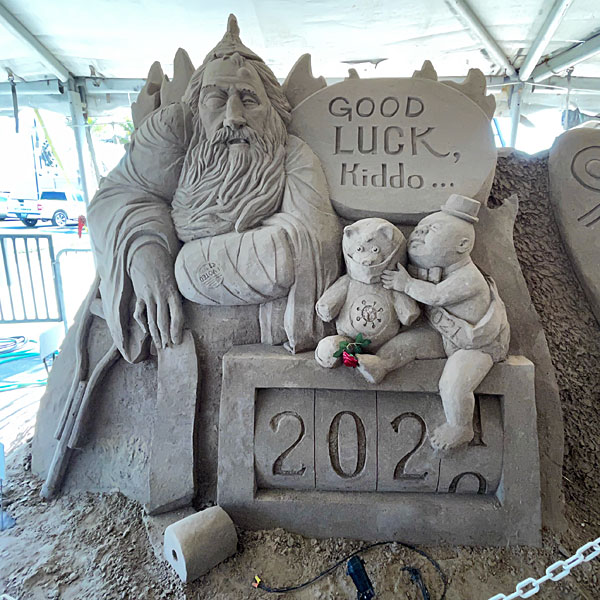 In closing, now that the Great Caterpillar Invasion of 2021 has mostly ended, I feel non-traumatized enough to share a close-up of an inchworm (aka canker worm...such a disgusting appellation), in the hope that it might convince you (and myself, to be honest) to find a trace of beauty in an otherwise annoying-if-not-completely-overlooked being. 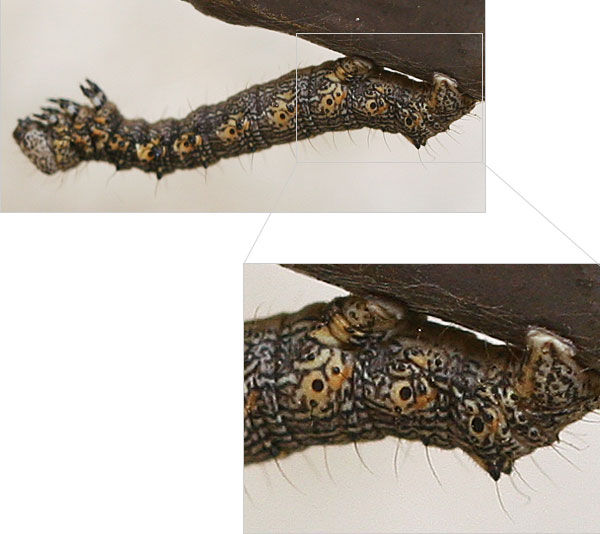 By the way, those two pairs of "legs" shown in the close-up are not true legs...they're more like sticky pads and they're called "prolegs." The true legs are up front (and slightly out of focus in this picture thanks to my mad photography skilz.) Don't never say we don't indulge in education-like material in these here parts.
Posted on April 29, 2021 1:37 PM | 4 Comments

I must let you know that there are those of us that enjoy your random blogs, but the scarcity and random nature of them makes them all the more desirable.

Keep up the scarce and random writing, we still need a break from the absurdity of modern day life!

So, let me see if I have this right: the less often I write, the better you like it? Alrighty, then.

JK, Cerise. I really appreciate your kind words, and as I told someone else today, comments like yours are what keep me going. (It's certainly not the fame and fortune! ;-))

I do remember the Good Old Days of Blogging, BSM (Before Social Media) where it was not uncommon to post six-to-ten times a day or more. That was, in hindsight, a lot of work. But, it didn't seem like it at the time because the blogging community was active, supportive, and constructively challenging (for the most part). *sigh* The only constant in life is change, right?

Thanks again for dropping in. You're always most welcome!

Thanks Cuz for once again helping me to stop and see that which isn't so obvious. Write on.

Hey, Jerry...thanks for indulging me!

My Dad's Collection: Glass Insulators was the previous entry in this blog.

Random Thursday: The Weekend Edition is the next entry in this blog.