Happy Thursday! Today is National Be A Millionaire Day, which means that most of you should ask your servants to read this post to you so you can save your eyesight for more important things, like counting your caviar or arranging your polo mallets by head weight.

Got a couple of albums I need to tell you about, as I seem to have them on repeat lately. Check out Brent Cobb's Keep 'Em On They Toes, and the recently released and much hyped (and definitely worthy of that hype) The Marfa Tapes by Texas musicians Jack Ingram, Miranda Lambert, and Jon Randall. They're both ostensibly country in genre, but they also avoid the over-produced, over-testosteroned bro-country model that seems to permeate "mainstream" country music nowadays.

The front page of yesterday's edition of the Wall Street Journal had a story about how people are not recognizing one another now that masks are coming off. The phenomenon is the reverse of what you might have experienced at the beginning of the pandemic: we didn't recognize folks because they were wearing masks. (Or, even better, we could use that as an excuse. "Oh, sorry...I didn't recognize you with your mask on. Don't you just hate these things?" This line of conversation provided a convenient diversion from the fact that you had forgotten the other person's name. Or so I've heard.)
But I don't want to dwell on the surprising-face-revelation aspect of the story. Instead, I draw your attention to the following excerpt* from the article:

The underlined text in the last sentence is a link that leads to a 2019 article which reports on the pressing issue of how the exclamation whoa is properly spelled. This is a surprisingly active debate (try googling "the proper spelling of whoa"). And it appears that one's preferred spelling depends on which side of that typical fault line you stand: age. Or, I guess, felt age. Or pretend age. Or...well, you know what I mean.
Since nobody else seems to have come up with a rule for when you should spell it woah, and when you should stop spelling it wrong and use whoa, (see what I did there?) I'll do it. If you're over the age of thirty, using woah unironically is akin to wearing skinny jeans, Crocs, and a derby to church, pretending to like Post Malone, and sporting a Maori shoulder tattoo even though you were born in Grand Prairie, Texas, and graduated from SMU with a degree in international finance and work at a credit union. IOW, don't.
Oh, and if you are under thirty? Also don't.
*The random link to the "whoa" article was an unexpected bit of whimsy. I'd love to know why the reporter chose to send readers off on that tangent. Also, I wish we'd have been shown a photo of the employee's overly tiny facial features.

Alert Gazette readers will recall that about a year ago, I began to document the goings-on of the family of red-shouldered hawks in a tree near our house. We monitored them through mid-summer, until the juveniles departed the nest to begin their own lives. At some point, the nest itself was completely demolished, diminishing our hope that the parents would return this year.
However, a couple of months ago we started noticing the beginnings of a new nest in another live oak down the street from us. We periodically spotted hawks in that tree, and there was still an intact nest, but then they seemed to disappear for a few weeks and we thought they'd abandoned that tree in favor of another nesting spot.
Yesterday morning, as we headed out for a run, we noticed a hawk sitting on the edge of what was now an impressively large nest. That seemed to indicate that we were wrong in our assumption about the nest being abandoned. 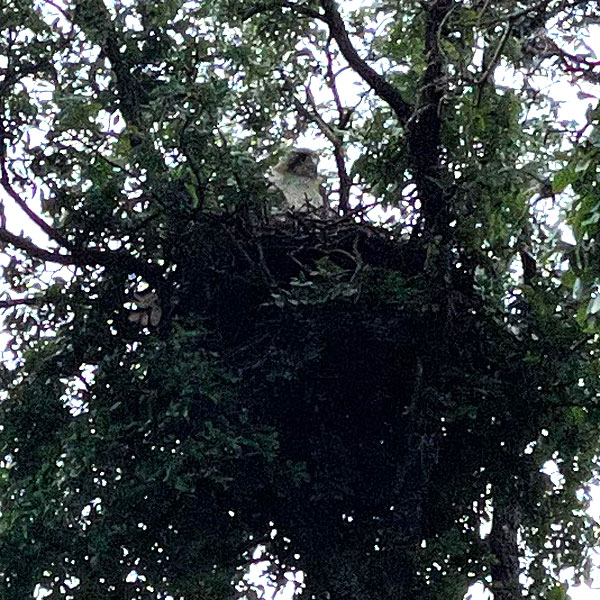 A ground-level view of the hawk perched on the side of the nest
So, as one does, later in the day I fired up the drone and did some spying. Look what I found: 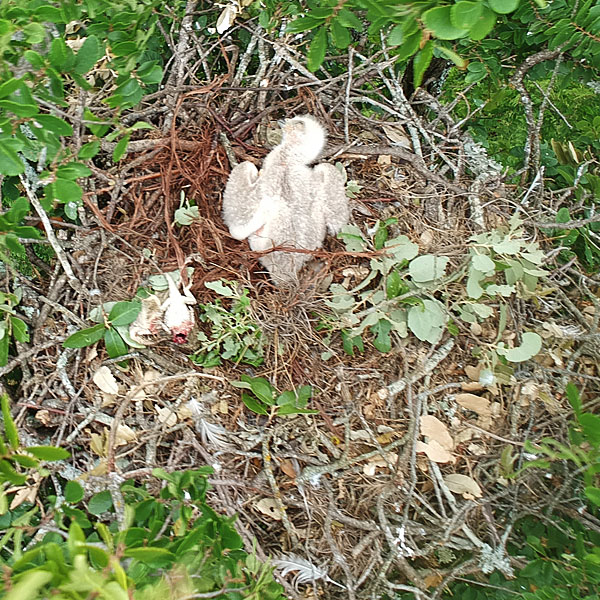 The adult hawks had been busy, away from our prying eyes, and there was now a nestling. However, there were three of them last year, so we don't know whether fewer eggs were laid this year, or some of them didn't hatch.
By the way -- and I'll warn you that the following photo might be disturbing if you have an huge fondness for small reptiles of the non-serpentine variety -- the small white object to the lower left of the nestling represents what I'm guessing is the remains of a recent meal. The shape appears to be the headless body of a Texas spiny lizard. It's a tough old world out there. 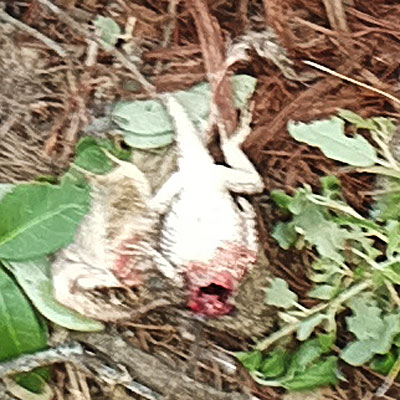 The nest is almost fifty feet above the ground, and is well-shielded except for an opening directly overhead that is custom-designed for a peeping drone. 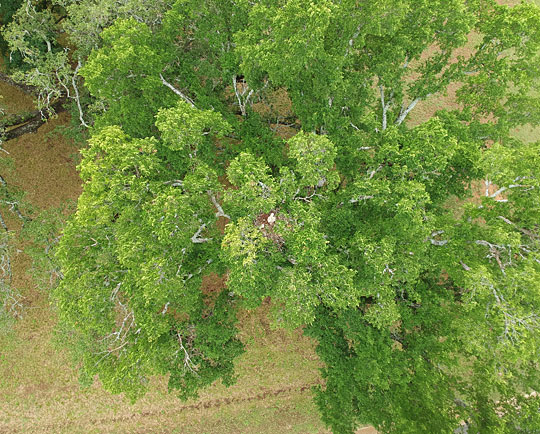 The adult hawks were nowhere to be found...at least not in the tree. But a hundred yards away, perched on an electrical transmission tower, I noticed that one of the adults seemed to be keeping an eye on the nest.
I wanted to get a closer photo but the drone's battery was almost drained so I had to shoot what I could and bring it back for a landing. 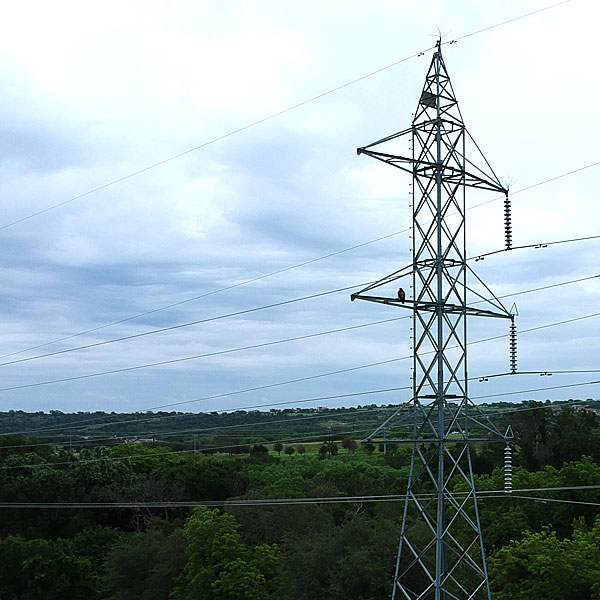 Last year was filled with challenges, but the hawk family served as a pleasant distraction. 2021 has already had its own ups and downs, but my hope is that nature will once again redeem some of those low points. Stay tuned!

Alert Gazette readers will recall that last week I posted several photos from our recent trip to South Padre Island and promised to discuss them at some point. This is that point.
I touched-up each of those photos to some extent because what came out of the camera didn't match my vision for the scene. (That sounds pretty hoity-toity, doesn't it?) I initially drafted a detailed explanation about what I was trying to achieve and how I went about processing the image with that goal in mind. But it came across and pretentious and bored even me -- and I usually love reading my own stuff -- so all I'm going to do here is present the after-and-before photos. The lesson to be learned is that with the right software, the camera is only the beginning of the creative process.
The following photo is of a man fishing in the Laguna Madre, aka "The Bay." Click-and-drag the vertical yellow line to reveal the original image. 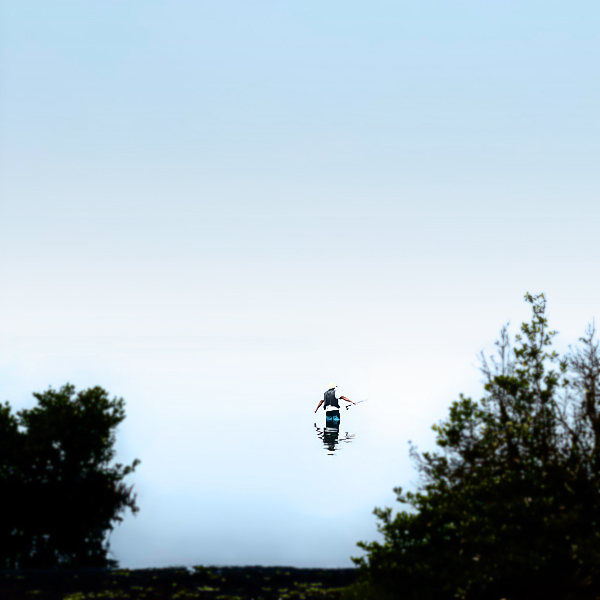 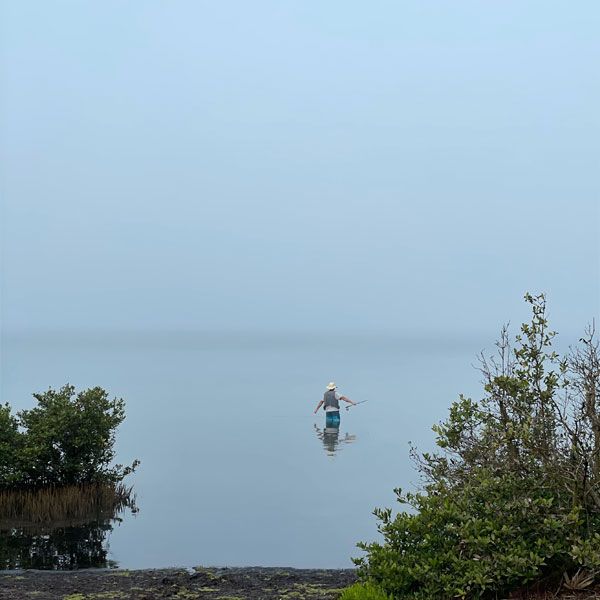 The next photo is of some gnarled trees and vines at the Atascosa Wildlife Preserve on the mainland across from South Padre Island. Again, drag the yellow bar to reveal the original photo. 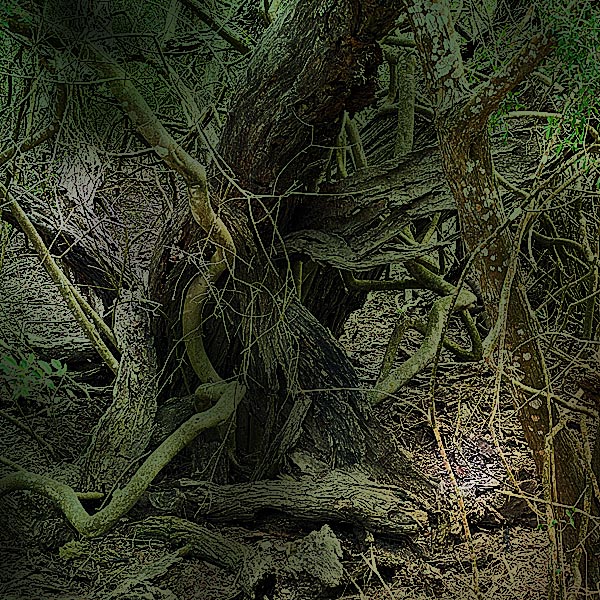 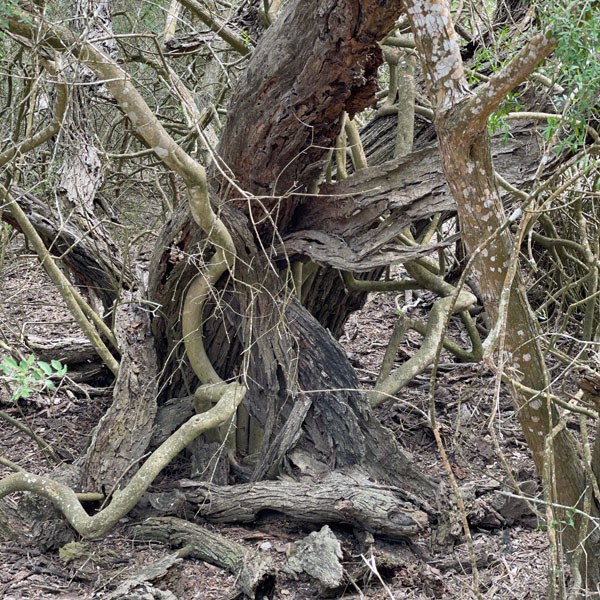 The final picture is of the sunset over Laguna Madre, taken from the deck of a restaurant.
You know the drill; drag the yellow bar. 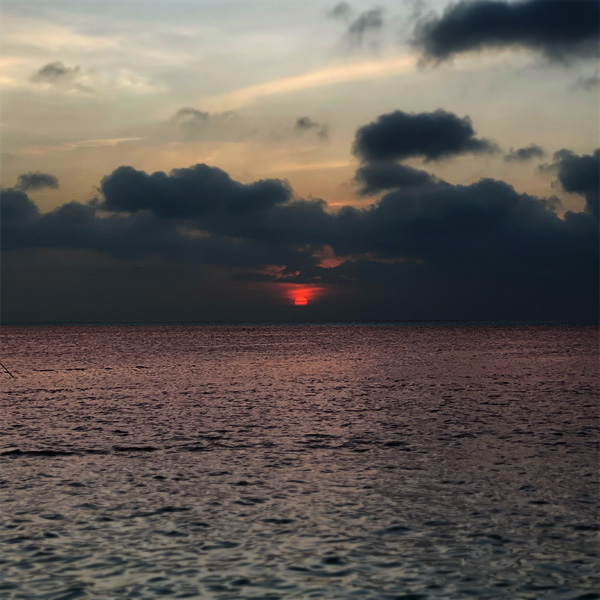 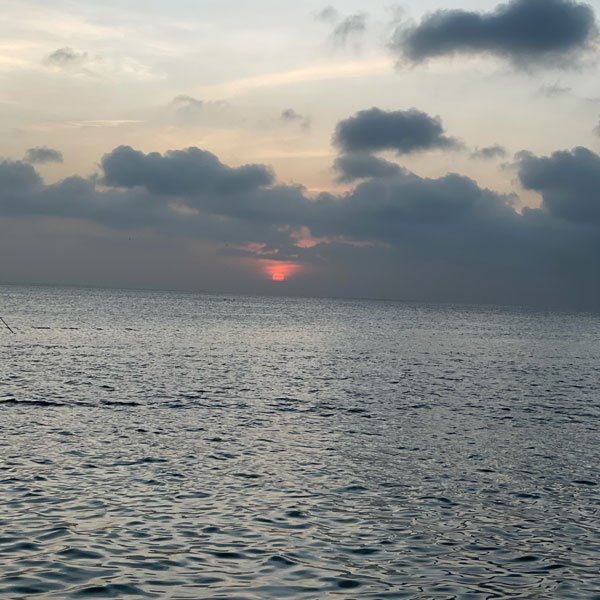 Also, our hawks are overachievers when it comes to nest building.

Random Thursday is the next entry in this blog.