The Miracle of Metamorphosis: Black Swallowtail Butterflies in the Making

Debbie and I have been monitoring the life cycle of black swallowtail butterflies, and it's a pretty fascinating process.
But, first...
I started writing this accompanied by the dulcet tones of a just-now-repaired clothes dryer, and it's a good feeling to know that we won't need to employ the makeshift fan-in-garage approach (which, I will admit, was surprisingly effective) until the next belt breaks.

Now, as I was saying, we've got some butterflies-in-waiting marinating on our back patio. Debbie first noticed them as tiny black worms infesting the parsley she had planted in a pot. (Don't ask me why; I have yet to encounter a dish which was improved -- or even affected -- by the addition of that herb.) She said she flicked a few of them off before she found out that they were actually the second stage in the life of a black swallowtail butterfly. The first stage is, of course, eggs, but who thinks to look for butterfly eggs on parsley plants?
Once we determined they weren't a threat to our existence, we left six of them to their own devices, and within just a few days, two things occurred. First, the parsley began to be stripped of its leaves. Second, those tiny (less than 1" long) worms morphed into these: 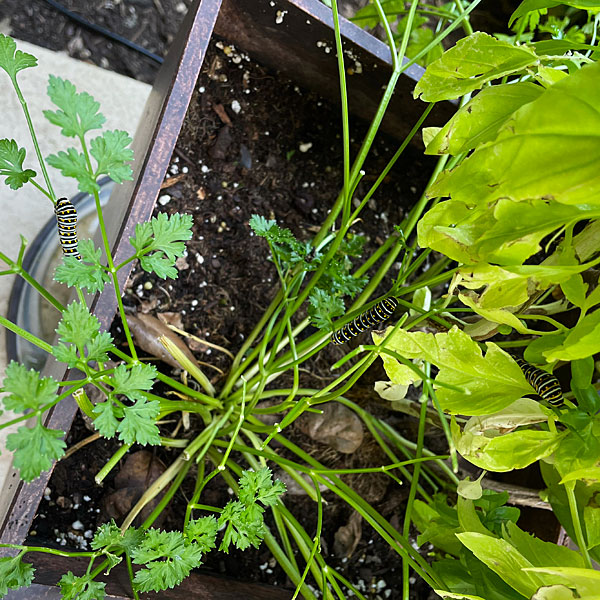 Three of the six original butterfly larvae (aka "caterpillars")
They were actually quite striking in appearance... 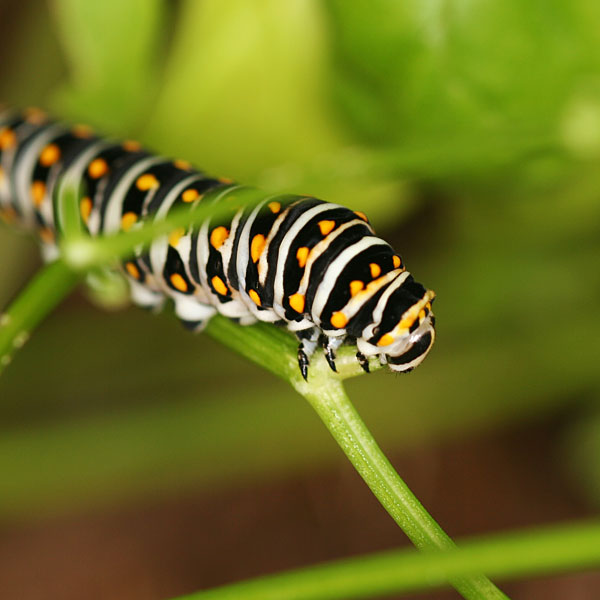 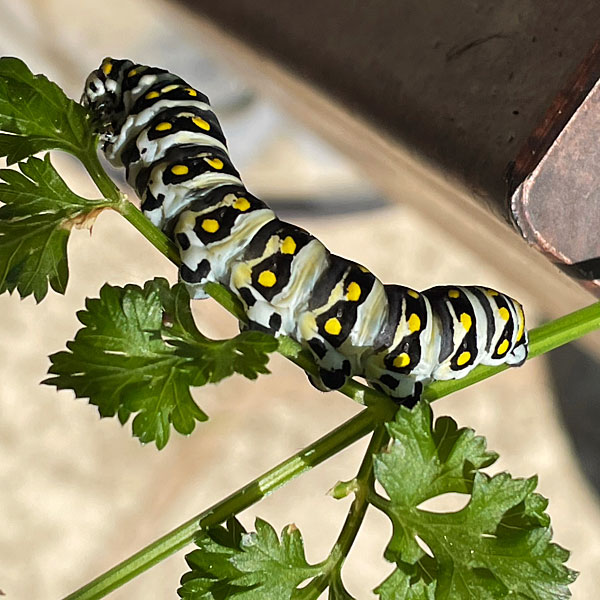 We didn't realize it until we did some research, but they actually have a bit of personality (if you'll excuse the anthropomorphism). If you threaten or irritate them, they expose an organ called the osmeterium which, along with an accompanying odor, is said to startle and repel predators. I was able to elicit this behavior simply by gently touching one with a gloved finger or even with a stalk of parsley. 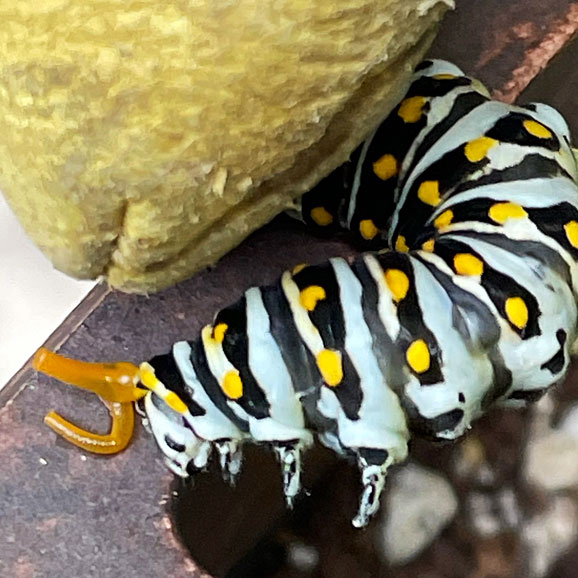 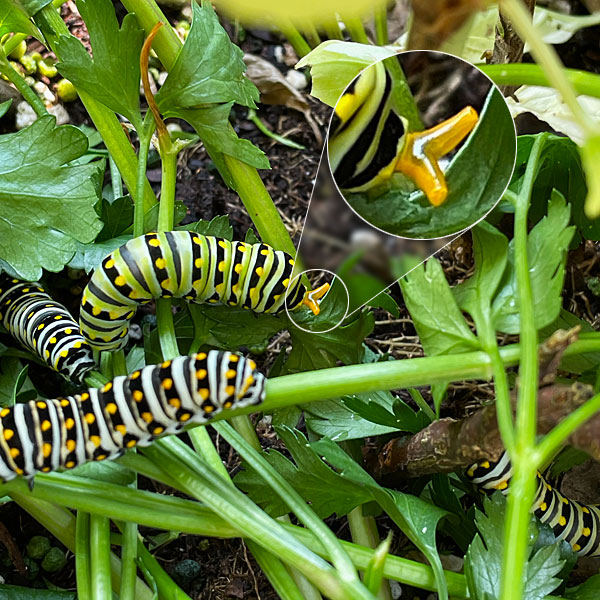 By the way, in the preceding photo you might notice that one of the caterpillars is sporting green stripes instead of white. We also learned that this means that it's one step closer to becoming a chrysalis.
And speaking of chrysalises (or chrysalides...take your pick), you probably already know that this is the last step of the transformation that results in a butterfly. But if you're like me, you may not have ever thought about the actually process in which a larva (caterpillar) becomes a chrysalis (pupa). And, in fact, I had always kinda thought of a chrysalis as being an outer covering of the caterpillar, but that's not even remotely close to what happens.
In reality, the chrysalis is the result of an amazing metamorphosis in which the caterpillar basically dissolves its own cellular structure and reshapes itself. OK, that's a tremendous oversimplification, and if you want to really delve into the biological science, here's a great place to start.
We were hoping to catch a caterpillar in the midst of this metamorphosis, but ours hid themselves from our prying eyes. However, Debbie was able to locate two of them in their chrysalis form. (Of the initial six larvae, three apparently wandered off and one didn't survive.) One of the chrysalises is now attached to a stalk of basil that was growing in the same pot as the parsley (the caterpillars showed no interest in eating basil), and the other caterpillar moved to an adjacent pot where its chrysalis form is now attached to a bougainvillea. (Update: My live-in fact checker informed me that it's a bell pepper plant, not a bougainvillea. I can't decide what needs more work, my botany skills or my memory.) 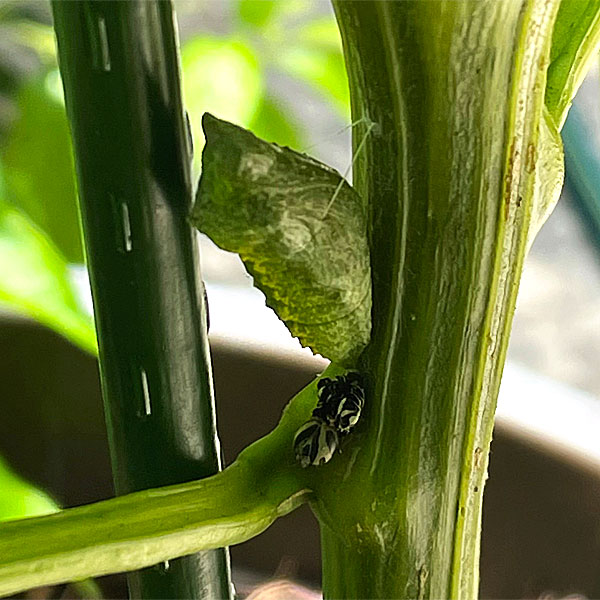 The first step in the metamorphosis is to spin a couple of threads to attach to the material where the chrysalis will remain for the duration. 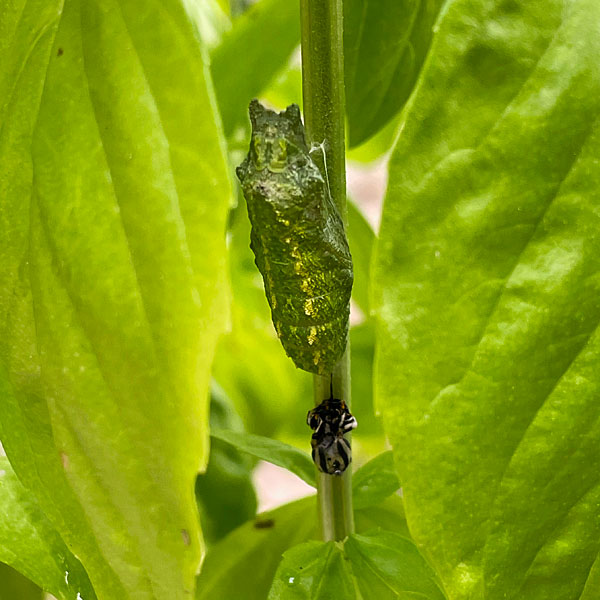 We were puzzled by the blobs of material at the tail end of each chrysalis. I haven't been able to find any mention of this phenomenon, but my theory is that it's actually a small piece of the caterpillar's body that isn't metamorphosed into chrysalis form.
Swallowtails are apparently known for their unpredictability, in that it takes anywhere from a few weeks to a few months for a butterfly (aka "imago") to emerge from the chrysalis. Their disregard for the calendar was proven as I ventured into a field outside just outside our neighborhood a couple of days ago and spotted a black swallowtail checking out the flowering weeds. 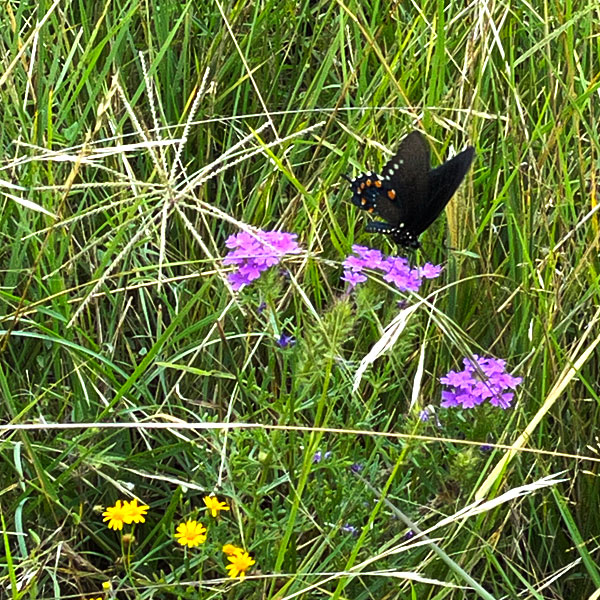 Its normal lifespan is only a couple of weeks.
The life of a butterfly is short, which is a little ironic considering how long it takes to get there from its beginning as an egg. But they make the most of that short life by adding incredible beauty to the world, not to mention their value as pollinators. 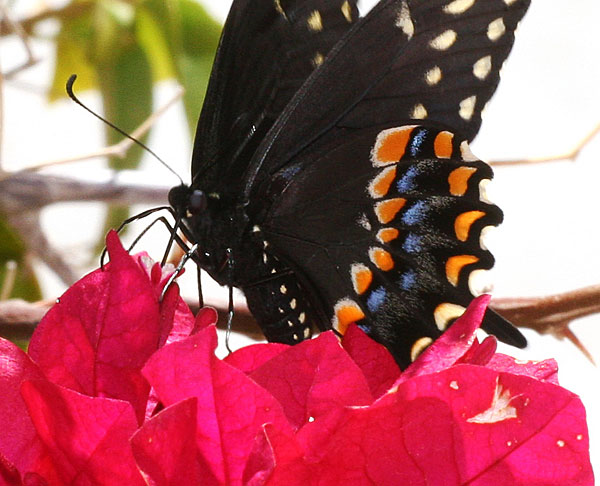 Eric, this is an amazing presentation! Great job!!

Thanks, Ken. We've learned a lot over the past couple of weeks. Nature never fails to amaze!

I already dislike my own comment. But I wish our current politicians could somehow make this change. I keep hoping.

Jerry, I'm afraid there's a better chance of an eagle emerging from the chrysalis than for most of our politicians becoming statesmen.

Random Thursday: Drones, Death, and Drama was the previous entry in this blog.

Neighborhood Nature (Pt. 7) is the next entry in this blog.